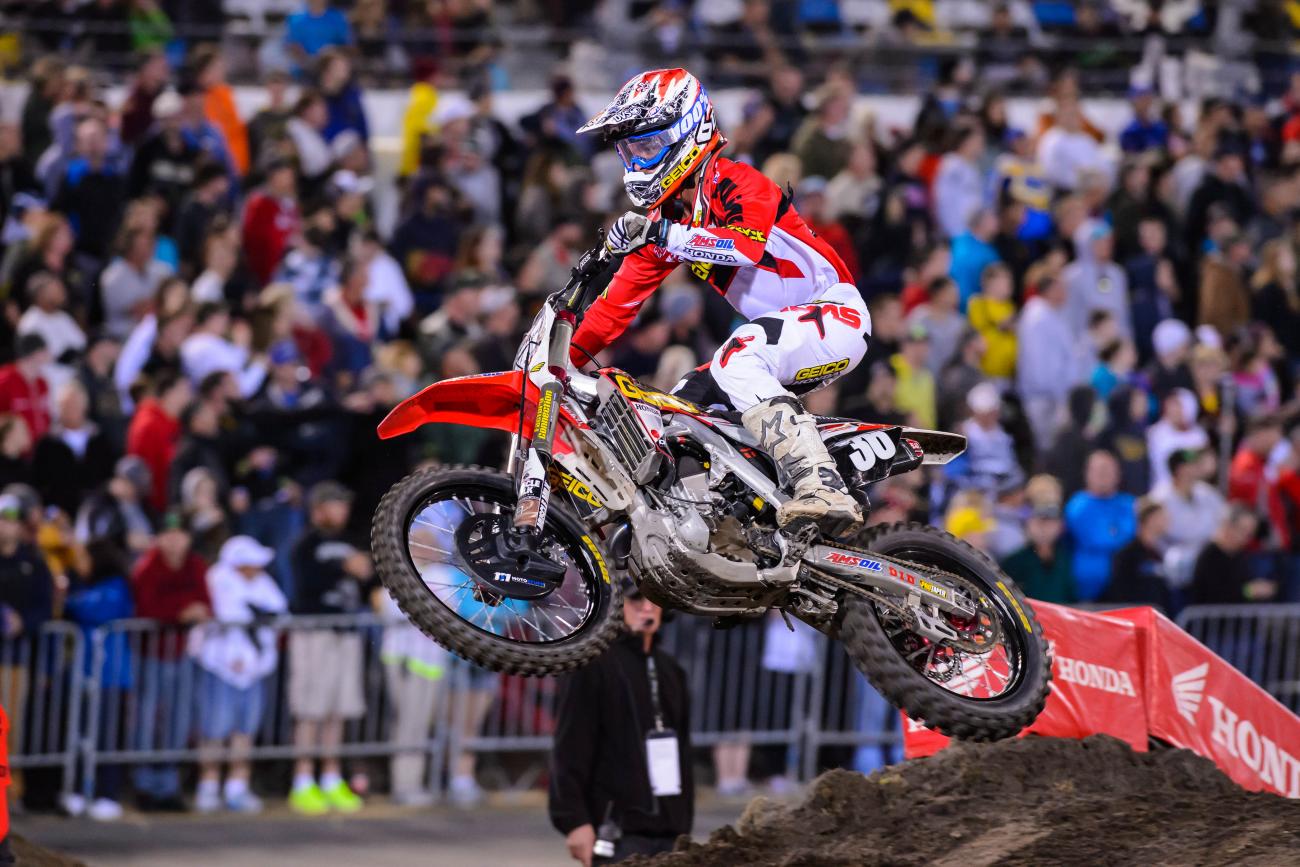 Daytona is easily the roughest supercross of the year—you can talk about how much rougher, longer or hotter it once was, but it’s still a bigger physical test than the regular stadium races due to the deeper, sandier soil, and the lap times are still longer than just about anything else on the schedule. There’s only so much engineering that can be done, anyway, most of Daytona is just going to be there no matter what. We talked to Ricky Carmichael, who designs the track, on Friday, and he explained that the track can’t help but get rough due to the soil, so it doesn’t even matter how you design it or how you run it. “If anything you need to leave it kind of mellow because it’s going to get so choppy and rutted and rough once the guys start doing laps,” said RC. This year, heavy rain the week before the race made the dirt extra soft and the ruts extra deep. Was it the same as Daytona 1994? No. Was it easy? No.

The week leading into the race was even rougher, though, for two riders. Weston Peick was riding at James Stewart’s place and wadded himself up good just a few laps into his first day of riding. It was said to be a massive hit and Weston really wrenched his back. After trying practice on Saturday, he couldn’t go and dropped out of racing for the night. Weston is going for some MRI’s this week to see if there’s any major structural damage. Yes, we’re surprised that Peick’s back can even get injured, but apparently the crash was legit.

Meanwhile at Chad Reed’s place, Kyle Chisholm went down and hurt the AC joint in his shoulder. He also was unable to race Daytona, which is his home race, and, even worse, Kyle was starting to log his best rides of the season. A momentum killer for the CycleTrader.com Rock River Yamaha rider.

Similarly, GEICO Honda’s Eli Tomac had momentum after a season-best runner-up finish at Indy, and, Daytona was Tomac’s best ride during his 450 appearances last year. But two big crashes in practice ended his day—they were BIG crashes and Eli walked off the track with a bloodied face. We got a GEICO PR today that says he’s good to go for Detroit (we hope) "I'm ready to race and am more than ready for another podium," Tomac said. "Indy was a great race for the team and for me because now we know we can do it in 450. It won't be easy, for sure, but we know we can get back up front, and that's what we want to do this weekend."

Note: There was a problem with the transponders at Daytona and not all average lap times were complete.

The rough Daytona track was good for others, though, with Soaring Eagle Casino/RCH’s Broc Tickle logging a career-best fourth in the 450 class, and he came through the pack to do it. "The track was brutal," said Tickle in a team PR. "It was really demanding and I knew the main was going to be about being consistent and hitting your marks. I started around 10th on the first lap, but I rode my lines and passed a couple of people early to get into 7th. When Malcolm Stewart and Justin Barcia came together and went down, I went up into fifth.” From there, Tickle got around the fading Dean Wilson for fourth. “I'm super pumped!” said Tickle in his best RC speak.

Tickle was terrible in practice, well outside of the top ten. So, what did the team do to his bike? Broc told us he literally doesn’t know—he just told them he needed to be more comfortable and the techs went to work and whatever they did made it better.

Oh, and you’re waiting for the weekly gem from the RCH press release, right? Here: “Brayton never "let Broc bye" so Tickle was headed to the Semis.”

Who else liked Daytona? BTOSports.com KTM’s Matt Goerke, who chopped up the familiar Florida sand and grabbed a season-best eighth. Couple that with his teammate Andrew Short getting a season-best fifth and the boys behind the team (the Butler Brothers, out of Florida) had to be happy.

While Tomac took a hit in Daytona, teammate Wil Hahn continues to elevate his riding. Wilbur had a horrible start in the 450 main, coming from 17th to sixth. "The ride felt better than a sixth, but when I start that far back, it's going to be a sixth, unfortunately," Hahn said in a team PR. "I felt like I could've gotten up there and gotten a fourth or a fifth, but I wasted too much time at the beginning and didn't come through the way I wanted it. But I was able to stay calm and keep my head down."

The Toyota/JGR Yamaha team was back to a three-rider lineup in Daytona, with Phil Nicoletti making the second stop on his guaranteed three-race deal (Nicoletti races with N-Fab graphics on his bike when he’s the third member of the team, but used the regular logos when he filled in for Josh Grant earlier in the year). Filthy scored his best finish of the year with 13th.

Hey, two 450 main events in a row for Ronnie Stewart, who hadn’t made any until last week in Indy. Did you know last year Nicoletti missed the first eight mains of the year and then suddenly made every one of the final nine? That’s how this stuff works sometimes.

In the 250s, it’s been a rough start to the season for Brady Kiesel, who was attempting to go racing with a broken jaw a few weeks back. Now (more) healed up, he raced for the first time this year—didn’t make the main but, still, the dude had a broken jaw!

The kid on the all-back Crosley Radio backed #91, Jacob Baumert, made the first 250SX main of career. He did it by barely edging out Ryan Zimmer for the last spot in the LCQ—we’ll talk to both later this week for Privateer Profile.

Not a superb season for AG Motorsports’ Kyle Peters, who had a podium last year, but he did tie a season high with 11th and also won the 250SX LCQ.

Remember round one of 250SX East Region in Dallas, where Gavin Faith was rolling along in third and seemed set for a podium before a crash? Well, it hasn’t gone well at all since then. In Daytona the TiLube Storm Lake Honda rider scored a season high of fourteenth. Faith has top-five speed weekly but it hasn’t shown in the results column.

Georgia privateer Auston Albers made his first main of the year and becomes the first Suzuki rider to make a 250SX East Region main.

By now you probably know that James Stewart had his header pipe crushed by Mike Alessi’s downed bike in what’s probably a million-to-one shot, but the photo of that pipe is so gnarly we’ll show it to you again.

We talked to James Stewart’s Yoshimura Suzuki team manager Mike Webb about Stewart’s recent run of bad luck, and he mentioned the team has made virtually no bike changes the last few weeks. They felt dialed in by San Diego (when James took his first main event of the year) and since then James has continued to feel good, so they’re not changing anything.

James’ brother Malcolm had his race come to an end due to a run in with Justin Barcia—perhaps you’ve heard about that, too?

Malcolm’s deal was for one 450 race for the local fans only, so indeed these two riders won’t race in the same class until Glen Helen in May.