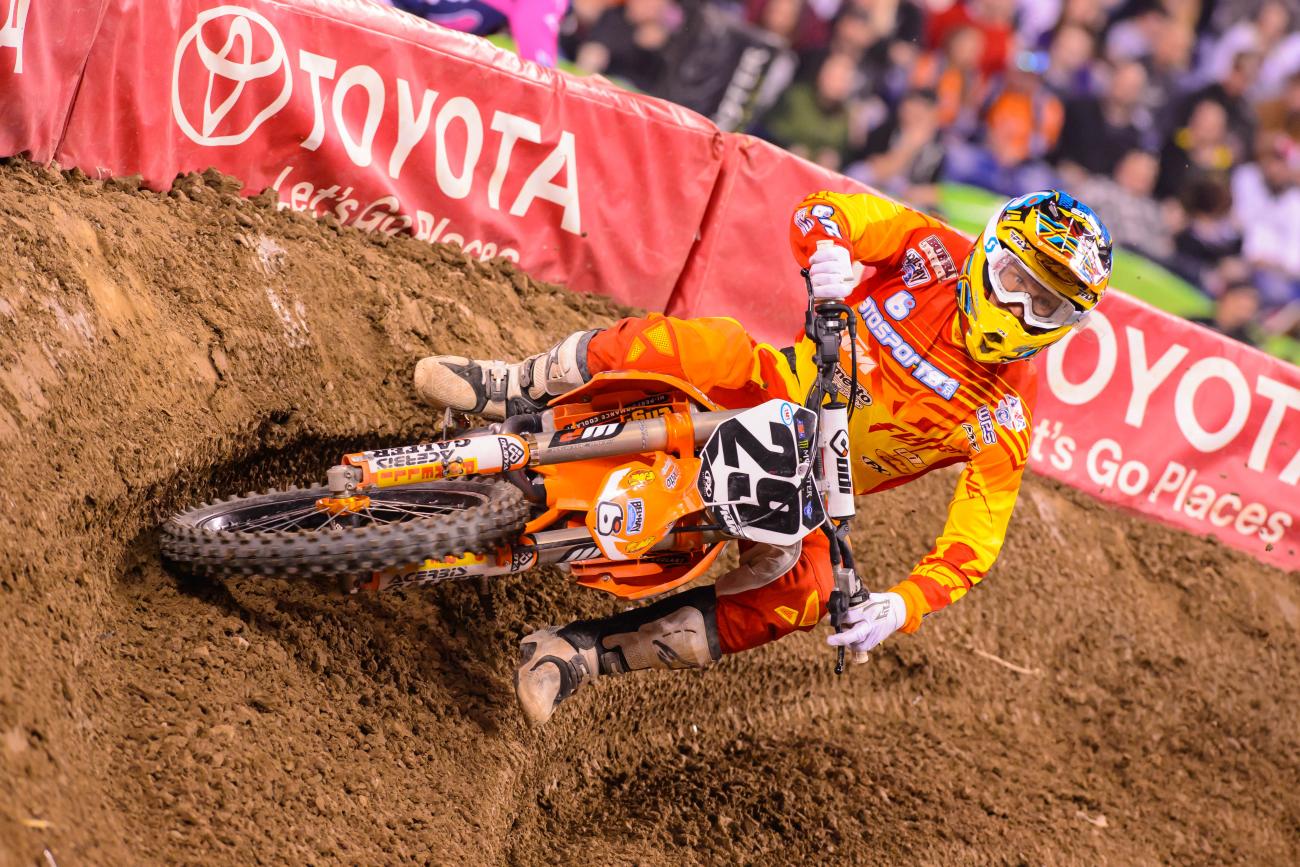 The hits just keep coming and coming and coming for GEICO Honda’s Blake Wharton. Predicted pre-season success for Wharton has just not come the way many thought it would in his return to GEICO Honda. And Indy may have gobbled up any remaining title chances he had. Trying to make his way around Vince Friese for fifth early, Wharton went down hard in the first set of whoops. After taking a minute to collect himself, Wharton remounted but crashed later in the race leading to a 20th.

Speaking of Friese, the Factory Metal Works/Club MX backed privateer continues to make headway against the factory guys. Although he got shuffled back to fourth quickly after his holeshot, Friese regrouped to finish sixth after Blake Baggett got by late in the race. Friese is happy with the way things are going early in the season: “I think I’ve proved that I belong up there,” he told us. “Just got to find a little bit extra to run that pace with those guys that are getting on the podium.”

Following back-to-back DNF’s to begin his pro supercross career, GEICO Honda’s Matt Bisceglia was on the cusp of not making the main in Indy. "It's not ideally where I wanted to be or where I wanted to get my first real win," said Bisceglia of his LCQ win in a team released statement. "But I was happy to get out of it, rip the holeshot, and grab the win. It allowed me to put down some really great laps before the main event.” Bisceglia also had a career night in the main event—finishing fourth. "I really thought I had a chance to get on the podium tonight, but the I was just too tight as the laps wound down. Overall, I am happy. This gives me something to build off of."

Red Bull KTM’s Ryan Dungey obviously had his best night of the season in Indianapolis, winning his first 450SX main event since last year’s electrifying night in front of his hometown crowd in Minneapolis. However, Dungey wasn’t the only rider to have a season-best night in Indy. Eli Tomac (2nd), Broc Tickle (5th), Andrew Short (6th) and Chris Blose (14th) experienced their best 450SX result of the season on the rough track. Nick Wey also tied his season-best finish with his third thirteenth place finish this year. Daytona’s rough and rutty reputation may play into these riders’ favor again this weekend.

It’s not often that the top three in points all go down in the first turn. Inside Lucas Oil Stadium Saturday night, Ryan Villopoto, Ken Rozen and James Stewart were all left scrambling to salvage points following a first turn pileup. Let’s take a look at how each worked their way through the pack up until Roczen crashed again.

“And Mike, honestly he was going second place speed—he was riding good! I can’t take anything away from him,” said Eli Tomac following Indianapolis. Tomac was relentless in pressuring Mike Alessi for second. But at every opportunity, Alessi was there to close the door. Eventually Tomac got tight and Alessi pulled a gap, before crashing. Let’s see how it played out before Alessi’s crash in this side-by-side comparison.

Privateer Gannon Audette missed the night show after qualifying due to a fractured finger. His status for Daytona is not known at this time.

Rookie Paul Coates made his first career 250SX main event in Indianapolis. Coates is originally from England but has been training at the Millsaps Training Facility (MTF) for a few years. Coates finished 21st in the main.

Australian privateer Jackson Richardson was back in the main for the first time since the opener in Arlington. Richardson collected his first top fifteen finish of the season Saturday.

CyleTrader.com Rock River Yamaha’s Alex Martin was fast all night—fifth fastest lap set—but had a few costly mistakes that led to his second straight finish outside the top ten.

Jeremy Martin, Alex’s brother, finally made his first main event of the season. That’s the good news. The bad? He crashed early, and late, and finished 19th. Not the start to 2014 that anyone expected from Martin.

Good ride for privateer Mitchell Oldenburg who fought back from a 21st place start to finish thirteenth.

Jimmy Decotis had his best all around ride of the season in Indy. Decotis ran up front early, before making a mistake in the same section Davalos crashed. He would rebound to finish seventh—his second consecutive seventh place finish to begin the year.

BTOSports.com KTM’s Andrew Short has kept it in the top 10 in every 450SX this year, and sits tied for seventh in the standings with Justin Barcia (and both should soon pass the idle Chad Reed, who is sixth). But Short was barely hanging in that top ten with a few tenths the last few weeks—his Indy ride for a season-best sixth was a breakthrough of sorts. “I had a slump with the tenths, but this is a good ride for me, and a momentum changer,” Shorty told our Steve Matthes. “Not what I wanted for awhile but tonight was definitely a step in the right direction.” Shorty was struggling with his bike in the ruts early in the day but made big changes before the night show, and it paid off.

How did James Stewart feel about his night in Indy? Go behind-the-scenes with the Yoshimura Suzuki team.

Rockstar Energy KTM’s Ivan Tedesco had one of the scariest crashes of the season in Indy when both leg got caught in the back tire of Tevin Tapia. We could put a lot of fancy words together, or you could just watch the video, see it from Racer X photographer Andrew Fredrickson, and hear from Tedesco about the crash via Twitter:

Glad to get outta here walking. Crazy crash last night. Thanks everyone for the love. #blessed http://t.co/2Sx6Z77TUD

RCH Soaring Eagle Suzuki’s Josh Hill was also a victim of the first turn melee. Hill was DEAD last following the crash but charged back to ninth. “Made some big strides today… with my bike, my health and most importantly, my attitude," Hill said in a statement released by the team. "Coming from dead last all the way up to 9th was good. But the fact that I actually had fun doing it is great!"

It was a good night for RCH Soaring Eagle all around, as Broc Tickle rode to a career-high fifth. “I felt like I rode a solid 20 laps. I knew I’d be good in the main event because I was consistent. In these ruts, it’s just about finding the flow,” Tickle to Racer X’s Steve Matthes.

We always find a money quote deep within the weekly RCH press releases, and this was our favorite clip this week, a description of the start of a semi qualifier: “Meanwhile Hill's choice of the inside gate position backfired big time. The Fox Sports broadcast team even showed how bad Josh was shut out in ultra slow-motion—it offered a great look at the sponsors' logos, but it was not the start that Josh wanted, obviously.”

GEICO Honda’s Wil Hahn, on the heels of a 450SX career-high in Atlanta was super fast all day, although his results did not reflect his speed. Hahn was third fastest overall in practice, but a crash in the main dampened his night. "It really was an awesome day even if the finish doesn't really reflect it," Hahn said in a team statement. "I was fast from the beginning, all day and every run. The main started off good, but I just dumped the bike about five laps in. I fell over and it took me a while to get my bike started back up. I had to charge back through the field to get the finishing spot I ended up with.

"I'm just frustrated about falling during the main event. I really felt like I deserved to be on the podium tonight. However, I am happy with my progress, with a faster than usual weekend for myself."

Dean Wilson made his 450SX debut as a fill-in rider for Chad Reed’s Discount Tire/TwoTwo Motorsports Kawasaki team. Wilson, like Stewart, Roczen, Hill and Villopoto, was caught in the first turn pileup. Wilson rebounded to finish tenth. “Lookin to have a much better weekend in Daytona was a bit nervous last weekend... Got the first one out the way now time to have some fun and ride upfront!” Wilson said on Instagram following the race.

Martin Davalos tossed away what looked like another sure win in Indy. Davalos was clearly the fastest 250SX all night (even eventual winner Adam Cianciarulo admitted as much) but was struck down by a piece of plywood that had become exposed as the track broke down. “Sometimes it’s out of your control,” said Davalos in a team statement. “The track got the best of me but we all had to ride the same track and I’m happy I was able to recover and still put my Kawasaki on the podium.”

Weston Peick’s hit or miss season continued in Indy. Peick was running in eighth before he crashed, bent up his bike, and then had to have help from a flagger to remove his machine from him. “I’ve got to grow through the growing pains and pull my head out of my ass and learn when to push. I need to learn my boundaries out there,” Peick told Steve Matthes after the race.

Toyota JGR Yamaha’s Josh Grant was another rider that suffered a crash in Indy. Grant went down in the first set of whoops and rebounded to finish 12th. Still, coupled with his ninth last week in Atlanta, Grant is notably better than he was before taking a few weeks off to let an injured shoulder heal up.

Easton, Pennsylvania’s Ronnie Stewart was visibly happy as he crossed the finish line in second at the end of the 450SX LCQ. He led two laps and topped riders such as Jimmy Albertson, Kyle Chisholm and Matt Goerke en route to his first-ever Monster Energy Supercross main event. Stewart fist pumped his way off the track and returned to finish twentieth in the main event.

Blair, Nebraska’s Cody Gilmore qualified for his first main event of the 2014 season. Most privateers are left fighting for qualifying positions in the LCQ, but Gilmore actually made it through in the first semi. There no doubt that he earned the last transfer spot, too, because he climbed from sixth to fourth to get it. In the main, Gilmore finished eighteenth and scored three points.

Did anybody know Swedish privateer rider Robert Lind has been riding with a fractured wrist?