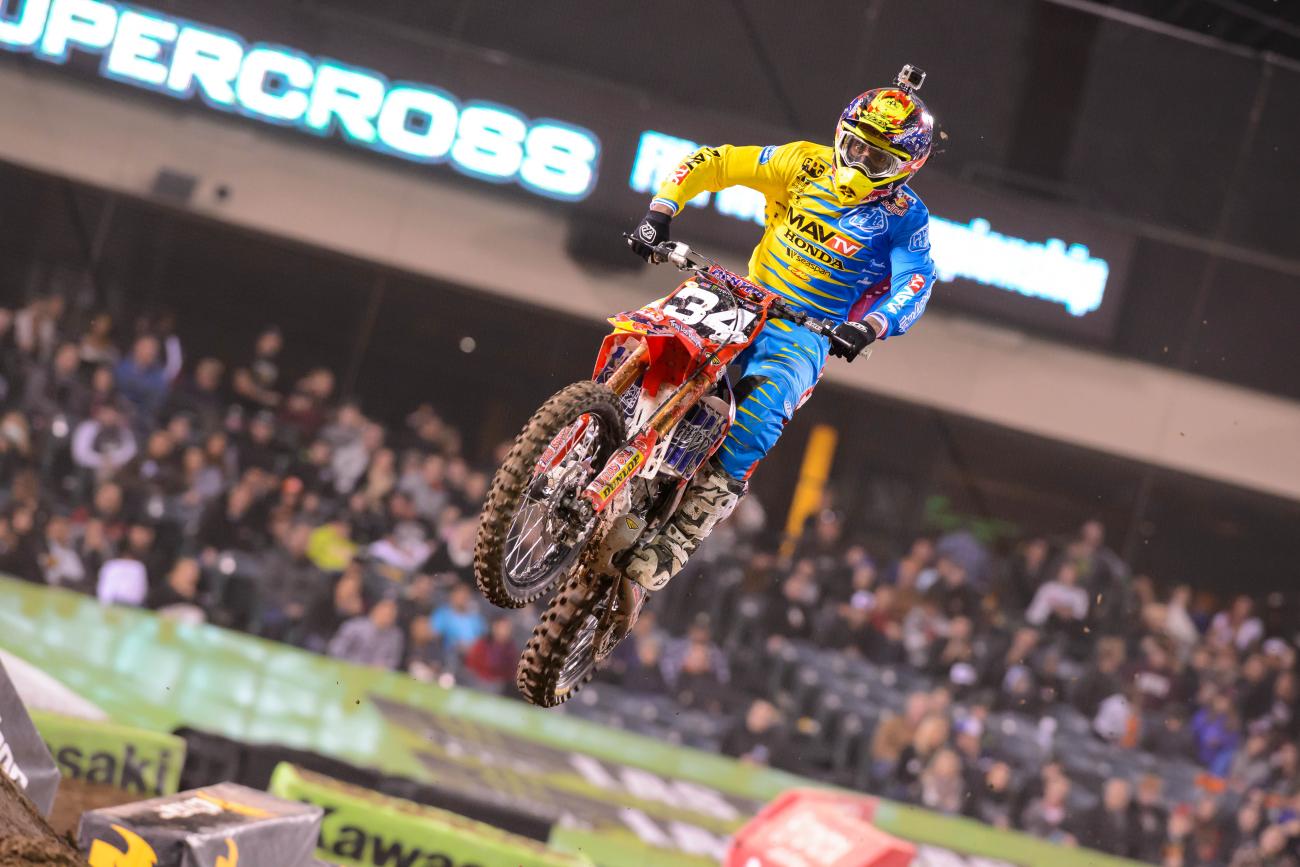 3 on 3 Big Questions in Supercross

1. Did you guys see the Stewart bros incidents last weekend? What's your take on Malcolm running into Jason Anderson, and Ryan Dungey running into James Stewart?

David Pingree: Both of the Stewarts had an issue in the same turn but for different reasons. Malcolm was being passed by Jason Anderson and although Jason was faster Malcolm didn’t like the somewhat aggressive move Anderson put on him as he went by. Malcolm’s retaliation was to jump to the inside of that turn and throw a block pass. Unfortunately the pass didn’t work and they both went down. This wasn’t the smartest move on Stewart’s part. Jason was faster and Malcolm should have just jumped in his draft and tried to learn something. Maybe he could have moved forward following Jason.

In the Dungey/Stewart incident the same move was attempted and this time it worked. Dungey darted to the inside and left James nowhere to go but down. James was slowing Dungey down so you could see something like this coming. Ryan is obviously working on being more aggressive. The pass was good but he’s had a couple crashes on his own now and he needs to stop that. Overall, I don’t think either of these passes were a big deal. The turn offered a great passing spot and guys were taking advantage of it all night long.

Jason Thomas: At first glance, I thought Mookie was just trying to block the line and pass Anderson back. After replaying it, and also seeing the aggressive move Anderson had just made, I now feel that Mookie was intending to make contact. I don’t feel he wanted to knock him down or anything but I do think he wanted to repay the favor. The “smoking gun” to me was the fact that Malcolm never turned his front wheel in an attempt to turn right. He continued going straight until he made contact and the result was Anderson high siding pretty spectacularly. As for the Dungey/Stewart incident in the 450 main, I actually didn’t see it and there was no footage from the broadcast so I will defer to my colleagues.

Steve Matthes: They were close to the same, but I thought Mookie's was a little out of line, while Dungey was just sort of there and JS7 didn't realize it. I think Mookie's was different because after the race, according to Anderson, Malcolm told him that it was payback for the pass Anderson put on him earlier. But I thought Anderson’s move was a pretty normal supercross pass. As for Dungey, there's no doubt he's been more aggressive lately (I like to call it #angrydunge) and he was trying to get past James. From what I remember seeing, Dungey was also a bit lucky to not have gone down himself.

2. Will San Diego dirt change things up compared to the Anaheims?

David Pingree: The dirt will definitely be different. The forecast calls for cool weather and cloudy skies and while we won’t see any measurable rainfall the conditions will keep the dirt tacky and softer than what we’ve seen at Anaheim. That means the riders can get more aggressive and that is a win for the fans.

Jason Thomas: The San Diego dirt, if the weather forecast is accurate, should be very similar to what we have seen from the Anaheim rounds. It is very slippery/icy and gets worse as the nighttime air brings up the moisture lying beneath. The only years we have seen San Diego with more traction is when there were big storms leading up to the race date, but I don’t see that happening this week.

Steve Matthes: I don't think so. It still gets pretty hard and slick (although we've seen plenty of moisture there over the years) and I don't think its Oakland good. I think we'll see the same guys up there and probably hear about the same issues from the riders—except were won’t hear about flat tires like we did at the last two Anaheim races.

3. Rookies are supposed to be inconsistent, as evidenced by just two rookie champs in 40 years of supercross. Can Ken Roczen stay in this all season?

David Pingree: Ken has been awesome so far this season. Some folks say he’s going to have a big crash soon and that will slow him down. Crashing is inevitable in this game but Ken doesn’t ever look out of control to me. I think his style is better suited to the 450 and his results are proving that. I don’t think he’s going to out-duel Ryan Villopoto or Chad Reed down the stretch in 2014; this is a long series and he’ll have a bad race or two. But if I had to lay money down right now on a supercross champion for next year my money is on Ken Roczen.

Jason Thomas: I think Roczen can stay up front, providing his starts stay consistent as well. He has never been one to crash often or make costly mistakes so unless he completely changes his approach I think we’re seeing what we will continue to get from Roczen. I do wonder how he will hold up over 17 races, as he’s never raced such a long series before. Everyone reacts differently to the endless travel, racing and general wear and tear that a body goes through over the course of the season.

Steve Matthes: Yeah, he seems to have the goods. He's fast, consistent and in shape. Roczen could just be standing on top at the end of the year after, say, getting three wins and a bunch of podiums. It seems realistic. Kenny's having a terrific rookie season, probably better than I thought he would to be honest, and he takes what he can get. Even in Oakland where he wasn't feeling it, he limited the damage and got a sixth. I definitely think he'll stay in this all season.