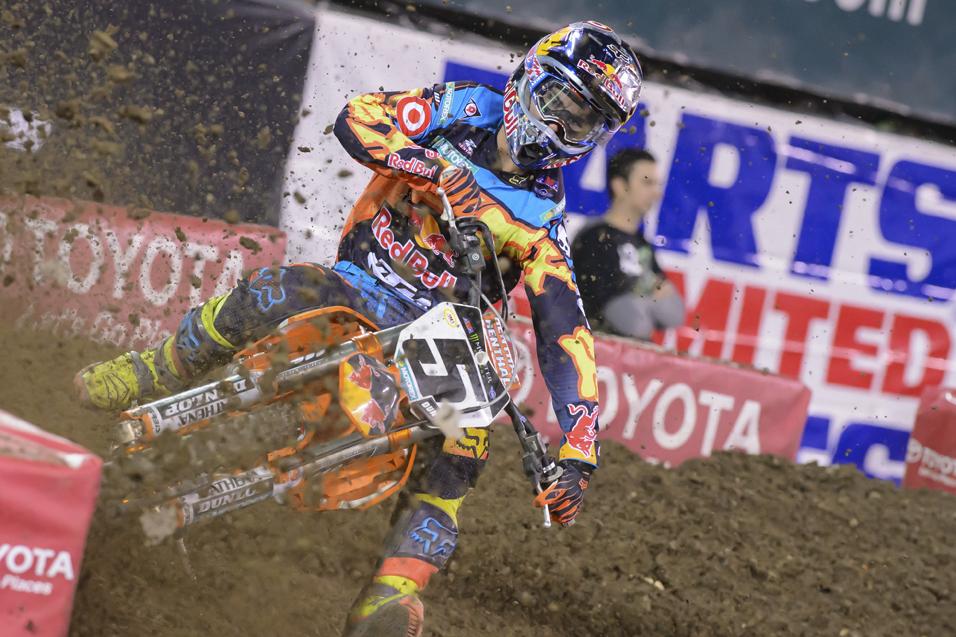 Dean Wilson’s run of bad luck nearly caught him again, as a big crash on New Year’s Day nearly kept him from racing. He used free practice as a test, and his teammate Martin Davalos, scheduled to ride the East Region, was ready to suit up for timed qualifying practice and switch to the West if Dean couldn’t go. Dean felt good enough to go qualify, thus officially declaring himself a West Region rider. He gutted out a fourth with hopes of getting better as the season goes on.

The latest on Eli Tomac is that he suffered a left shoulder rotator cuff contusion. Tomac is sore and swollen and is undergoing therapy, but will be racing in Phoenix.

Tomac’s CRF450R has the same full works parts and pieces Justin Barcia and Trey Canard do with Muscle Milk Honda. The difference is personnel, as his bike is tuned by the GEICO/Factory Connection team people, including Dave Arnold, the factory Honda team manager in the '80s and '90s who now works for the GEICO team. Wil Hahn’s bike is more of a hybrid between production and works parts, similar to what Kevin Windham had run for the last few years. 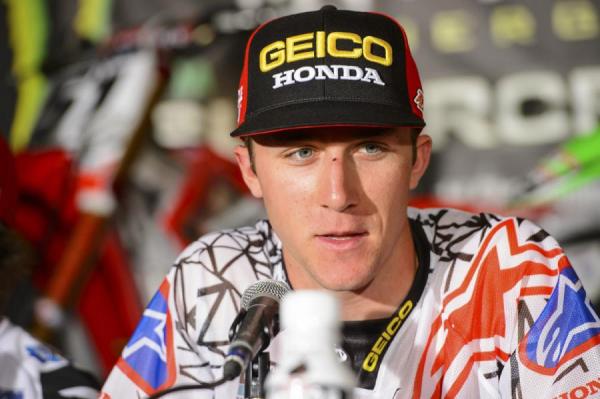 Eli Tomac is expected to be on the line in Phoenix.
Simon Cudby photo

The air shock is back! Last year’s much-buzzed about KTM suspender made a return under Ken Roczen’s bike in practice, but a traditional coil-spring shock was back on for the night show. But Andrew Short used an air shock the entire time on his BTOSports.com bike. “Yeah I’ve been running it for quite a while, since right after Elsinore,” said Shorty. “I haven’t really ridden a standard one in a long time. It seems like that’s where all the development’s going at KTM and I really like it and prefer it.”

Also running an air shock? Rockstar KTM’s Ivan Tedesco. Tedesco and Short’s air shocks then got very, very close during the main event, with Short getting very, um aggressive. Tedesco ended up with a DNF when the contact punched a giant hole in his engine. Our Steve Matthes asked Short about it:

Matthes: I think you had a solid, steady night. You did hit Ivan. You put a hole in his case.
Short: Yeah, but he was all over the place for a couple laps. He jumped me off the triple and I went 2-3 and I knew I had to get by him right then. There was like three of us, so I don’t know if I did it or who did it. But it was squirrelly and pretty dangerous. I think it’s funny because I was pretty nice to everyone tonight and then as soon as I barely touched somebody, what I’ve been getting done to all night, everyone freaks out. But it is what it is.

Nobody’s freaking out, I just noticed it.
I heard he was giving me the thumbs up as I went by the next lap.

I didn’t hear that. There already is an Andrew Short, Ivan Tedesco history.
I have nothing but respect for him. I’ve raced him since I was a little kid. We’re both competitive. We both try really hard. I think we’re similar in a lot of ways, obviously that breeds competition. That’s the last thing I want to do is take out a great guy like him. We both need to keep racing and going forward. 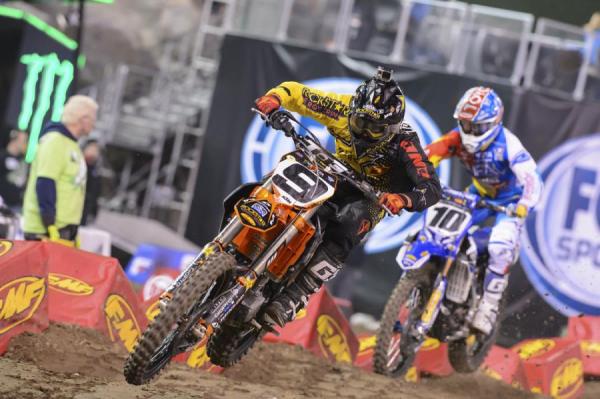 "I have nothing but respect for him. I’ve raced him since I was a little kid." - Andrew Short on his crash with Ivan Tedesco (above).
Simon Cudby photo

- If you want an indicator of how supremely talented this 450SX field is, just take a quick gander at the lap times. The nine fastest laps set in the main were all in the 58-second range. While track layout and conditions can contribute to lap times being closer, consider this: Last year at the season opener, the difference between first and ninth fastest was 1.6 seconds. This year the gap was .747 tenths of a second, less than half that.

- Following a slow start, James Stewart had sliced through the pack by lap 15 and was able to pull onto the rear wheel of leader Ken Roczen. But on what laps did Stewart pick up the most time before a race ending crash in the whoops?

- Three-time defending champion Ryan Villopoto opened an early gap over Ken Roczen and Chad Reed. Ultimately RV would wash out the front end in a corner, but how did Reed and Roczen measure up before that?

- Jason Anderson’s come-from-behind victory in Anaheim seemingly came out of nowhere. Let’s take a look at where Anderson picked up ground over the final five laps.

Chad Reed’s re-relationship with Kawasaki seems to be going much better than the previous run, in 2010. “We’re real happy,” said Reed. “During the off-season obviously they’re doing their own thing, we’re doing our own thing. You’ve got two race teams that are striving to be contenders week in and week out, so a lot of pressure on each team. I think they’re helping us more than maybe what people think. For me, my biggest thing is there’s no over-promising. I feel like they’ve lived up to their end of the bargain. And for me and us as a race team we just want to build that. Obviously the last time I was here it didn’t end well or go well and we’d like to change that. There’s some really solid people there. I love Yoko over there and a few of the guys there. We’d like to let this thing grow and try to not be only one Kawi on the podium. Hopefully we can get both of us up there.” 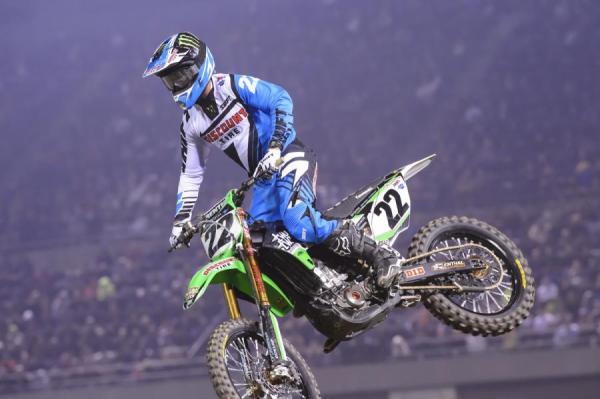 Chad Reed is happy to be back with Kawasaki.
Simon Cudby photo

Mike Alessi had a totally different approach this off-season. “I didn’t start riding supercross until about late October, early November,” said Mike. “I kind of took a different approach and I did some local races in North Carolina just to kind of keep from getting burned out from riding supercross so much. Working with Byrner [Michael Byrne] has been really good for me. I can’t thank the guy enough. He’s a very smart guy. He just helped me a lot with my diet, my training, bike setup, even riding down at Chad’s [Reed]. Chad Reed is a good guy. He helped me a lot with my motorcycle, him and Byrner. And it’s cool to see a competitor like Chad, and a standup guy that he is, to come and help, tell me, “This is what you need to do to make the bike better.” Coming from him, that’s pretty cool. Obviously Byrner and all the knowledge that he has in setting up a motorcycle, you saw it tonight. The motorcycle’s way better, blitzing across the whoops, fast in the corners, fast off those dragon’s backs, just aggressive, riding good.”

Among other things, Byrne explained that he’s working to get Alessi to ride further forward on the bike, and is teaching him to be patient when he gets on the gas in corners—he said that Mike had a tendency to get on it too early, push the front end, and carve wide. By the way, Byrne is back on the bike following another leg surgery after the Lake Elsinore National, and his deal with SmartTop MotoConcepts allows him to race for the team if he choses to as his health progresses.

Ryan Dungey has a trainer for the first time in awhile. “I started working with Robb Beams, a great guy out of Orlando,” says Dungey. “It’s just one of them things, if you owned a business you would hire the key people to make it better. And there are things I don’t know physically and mentally with stuff, so if I feel like he can bring something to the table then it’s an investment. We’re building a great, strong relationship. I don’t think I’ve ever been one that has been lacking fitness but there’s always those areas you can fine tune.” 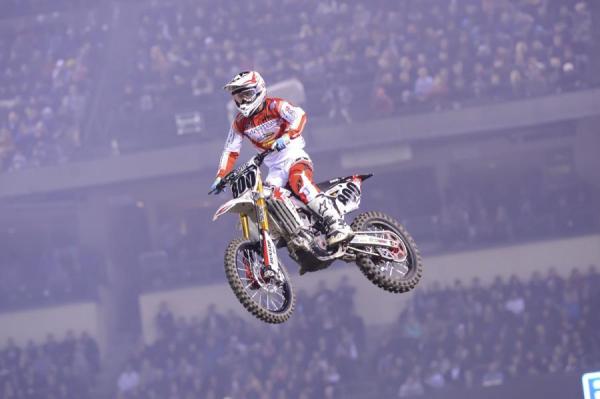 Mike Alessi made major changes to his program this off-season.
Simon Cudby photo

Josh Hill had to pull out of the 450SX main early with a back injury. “I’m not too happy with the way everything went this weekend,” Hill said in a team statement. “The team and I have worked way too hard in the off-season for these results. I tweaked my back a little four days before the race which threw a wrench into Saturday. But there are no excuses; I’m going to keep my head down and work hard to get the results we deserve. I’m looking forward to this weekend in Phoenix.”

An Achilles and shoulder injury cost Monster Energy/Pro Circuit Kawasaki’s Darryn Durham all of the 2013 Monster Energy Supercross season. In his first supercross race since April 2012, Durham qualified 12th fastest before finishing seventh in the main event. “You know it’s almost been two years since I’ve raced supercross,” said Durham in a team statement. “I’m happy I stayed on two wheels every lap and it’s a solid start to the season even though I don’t feel like I rode like myself. I learned a lot about how the West Coast tracks develop as the night goes on and I look forward to building from here.”

Also returning from injury were Lucas Oil/Troy Lee Designs Jessy Nelson and GEICO Honda’s Zach Bell—both were sidelined for nearly the entire 2013 Lucas Oil Pro Motocross season. "I made it through without any injuries, so that's a positive step,” said Bell in a team statement—although he did have a small crash. Nelson finished a quiet ninth.

Bud Racing Kawasaki made their U.S. debut in Anaheim. The long-standing GP team has turned their attention to Monster Energy Supercross in 2014, backing Frenchman Valentin Teillet. Teillet qualified for his first career supercross in Anaheim, finishing 17th on the night. 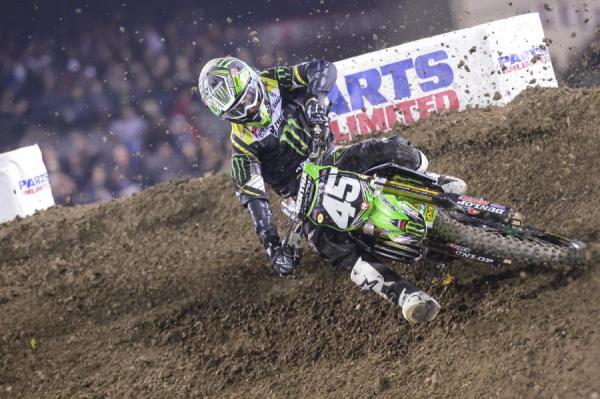 Never judge the results sheets by their cover. Although Weston Peick finished 16th at the opener, he set the sixth fastest lap in 450SX, and was in the mix for a top ten before he suffered bike problems. “Had a small bike problem last night in the main that forced me in the pit, kept me out of the top 10 but salvaged a 16th rd2 is on,” tweeted Weston following the race.

Australian supercross and motocross champion Matt Moss is back in the U.S.—for a couple races at least. Moss, who last raced in the U.S. for the now defunct J-Star/JDR KTM, is getting some help from Yoshimura Suzuki during his brief stint. Moss finished 13th in 450SX Saturday.

Update: Vince Friese was black flagged during Saturday night’s 450SX main—reportedly for an incident involving Wil Hahn. "The black flag was officially called for Vince Friese by the race director. So yes, he was officially black flagged and DQ’d from the main event for ignoring the blue flags and unsportsman like conduct," said Kevin Crowther, Director of AMA Supercross and Pro Racing Relations. "He didn’t get the black flag because he pulled into the mechanics area first."