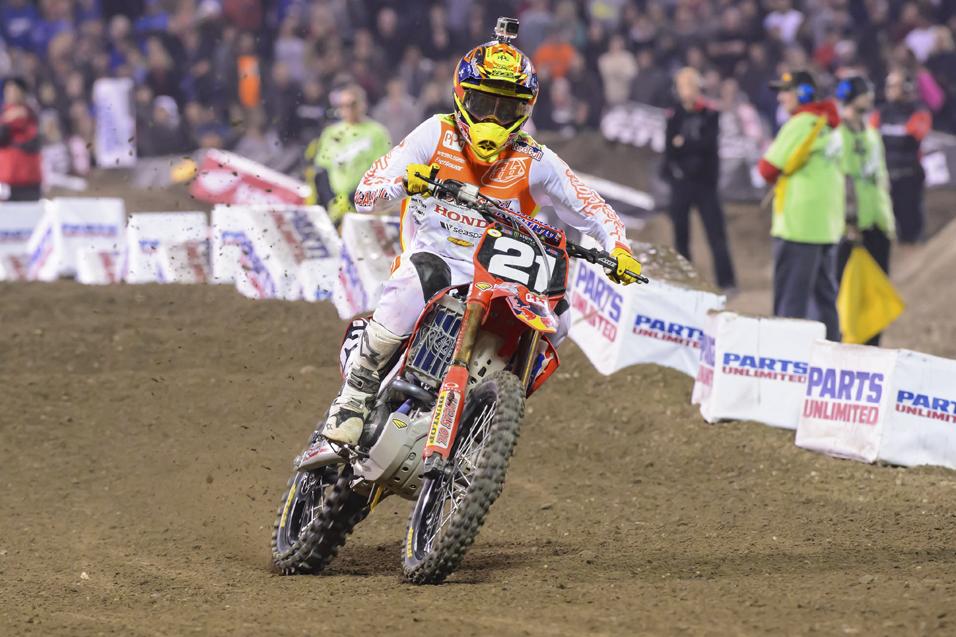 Advertisement | Advertise with Us
By Aaron Hansel and Jordan Roberts

It went well. We knew what changes to make to the bike and we had it dialed going into the main. I’m really familiar with setup this year, and my mechanic Rich and engine tech Ryan are doing an awesome job, as well as everyone else. It’s really cool to have that familiarity with setup and to be able to know what to do when things aren’t going right.

In the main I got a good start and stuck it in there with Jason [Anderson] and followed him for a couple laps. I found where I was faster, made the pass and started inching away. Then in the last three laps, I kind of let up a little bit. It’s hard when you come up on a lapper and you don’t know what direction they’re going to go; it makes you hesitate. Too many guys got in my way and I’m bummed. They really need to respect that blue flag when it’s in their face. But it is what it is, and I would have done the exact same thing if I were Jason. I don’t consider his pass dirty at all. It was the final two turns and it was now or never for him, and it was fair.

From the press box it looked like you could have ran it in on him in the final turn if you wanted to get dirty. Was that door indeed open?
It wasn’t as open as it may have seemed. If it was I would have driven it in on him. When he hit me I accelerated to make sure that door was open and I accidentally ran into the back of him, and that little bobble took away my momentum and I wasn’t able to make the pass again.

Did you know he was that close?
I didn’t. There was one incident with a lapped rider where he was in my line, straight up, and didn’t move out of my way. I had to follow him through a section and I was in helmet realizing the gap I’d built on Jason was deteriorating. He capitalized, and that’s racing. – Aaron Hansel 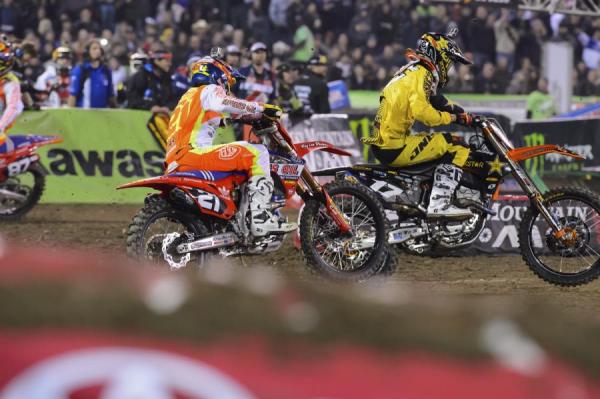 "It wasn’t as open as it may have seemed. If it was I would have driven it in on him." - Cole Seely
Simon Cudby photo

The day started off all right—well, pretty good. I had the fastest lap time in practice, which was cool. I got a little jacked up off the start and ended up third in my heat race, so that wasn’t that awesome. Coming into the main event, I got a pretty good start—top three. I mean, I was just trying to salvage a podium, but I made a mistake and [Zach] Osborne got by me. Honestly, I’m just kind of lucky to be here after having a big crash on Wednesday. I haven’t ridden since then. I didn’t really know if I was going to race or not at first. I’m definitely just happy to walk away with a fourth and move on to next weekend.

Riding at the test track is a little different compared to coming out here and racing with all of these guys. Do you feel like you have any bugs or kinks you still need to work out?
For sure, I think I still have some bugs and kinks to work out. I think if I would’ve came in a little more confident—you know, last time I rode I was laying on the ground at the test track. Yeah, I’ve got some things to work on—and I think we all do—but I’ll be all right.

How do you feel about Phoenix?
I feel very motivated going into Phoenix. I’m not happy with tonight obviously, but fourth is good enough in points to build off of. Hopefully I’ll get some wins here shortly. –Jordan Roberts 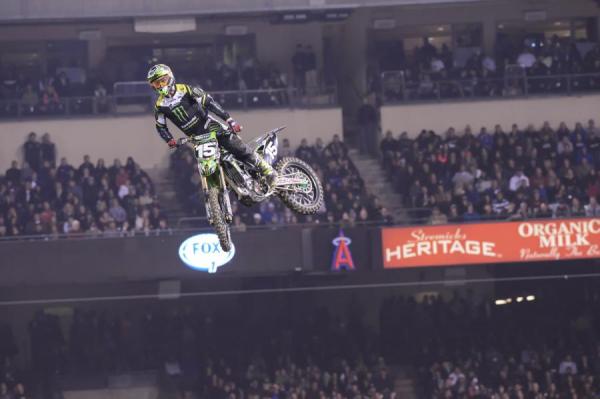 "Honestly, I’m just kind of lucky to be here after having a big crash on Wednesday. I haven’t ridden since then." - Dean Wilson
Simon Cudby photo

How did you first pro supercross race compare to your first pro motocross race?
It was for sure different. I think it was a little more nerve racking. There’s a bunch of people here and all eyes are on you. Overall, I thought it was a pretty good day and I definitely learned a lot.

It looked like you were pretty comfortable out there once the gate dropped. You were able to mix it up with some guys that have a season or more under their belt.
Yeah, not the first practice, but the timed practice, I was definitely a little tight and I qualified sixth. I got third in the heat, but I got a bad start in the main. I just kind of spun and ended up getting a fifth. I think I would’ve gotten a better start I for sure could’ve been a podium guy. I made a run on Dean [Wilson] and caught him and Zach [Osborne] in the end. That was cool. I felt like I kept building throughout the race. I’ll take it as a learning experience and build from here. I’m working toward a podium and hopefully I’ll be up there next weekend. –Jordan Roberts