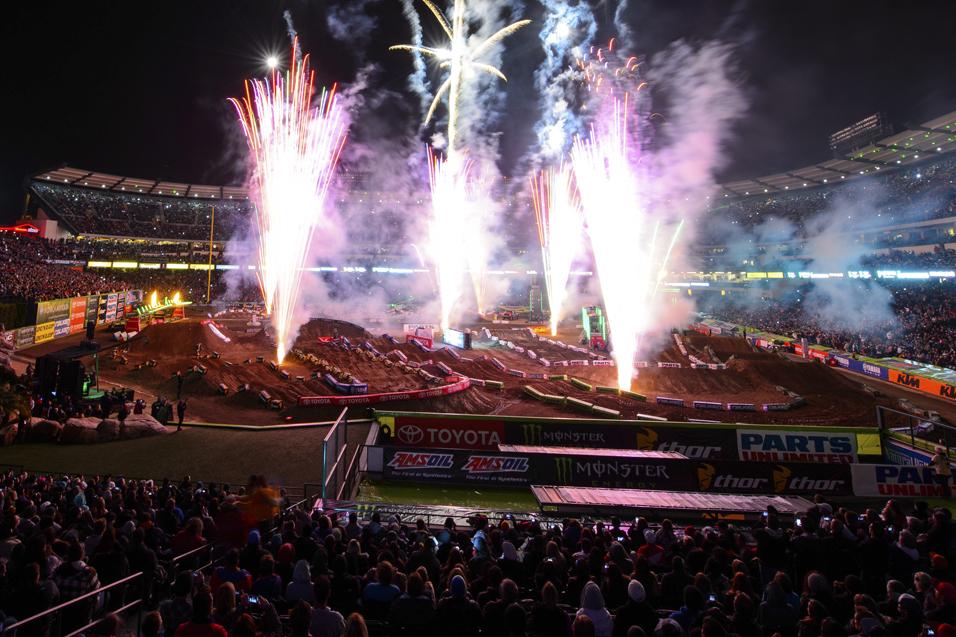 January 2, 2014 1:00pm
by: Andy Bowyer
Angel Stadium Anaheim, CA Anaheim I (A1) Monster Energy AMA Supercross Championship
Hello, everyone, and welcome to the Rev Up. It’s time to go racing, and in two days the best supercross racers in the world will embark on a 17-round quest for the most coveted championship on dirt. The 2014 Monster Energy Supercross series is locked in for the long journey from Anaheim to Las Vegas and it’s hard to remember a season with more promise. Each round of the tour—from the opening West Coast offerings, to the East Coast swing, to the final stretch—will be thrilling, but the season opener is truly special. There is simply no race throughout the year that brings the noise like Anaheim 1. The pits are abuzz with core fans salivating over the first looks of the new bikes, numbers, and riding gear and it’s just a unique experience that only happens once. When its time for the night show to start and they clear the pits and you see those riders heading to the tunnel for the first time of the season, wow, you just leave footprints in the concrete heading to the stands inside Angel Stadium.

That said, Anaheim 1 isn’t just unique for all of the firsts; the season opener has historically been a wild event that shatters popular pre race predictions against the wall. Go back to 2002 when Ricky Carmichael was making his series debut on his CR250 and he knocked himself out cold while David Vuillemin won the race. In 2005 Chad Reed showed up to the starting line as the defending champion and put up a 16th! Four years later we saw Reed and James Stewart take each other down while Josh Grant won his first main of his career. Then, of course, last year Ryan Villopoto was supposed to wipe the floor with everyone but he crashed all over the track while Trey Canard and Davi Millsaps went psycho all the way through the last lap with Millsaps taking the win. Villopoto won ten races last year but didn’t lead the points until past halfway. Last year this race left us all thunderstruck and it will be hard to top, but the 2014 offering has the ingredients to do so. 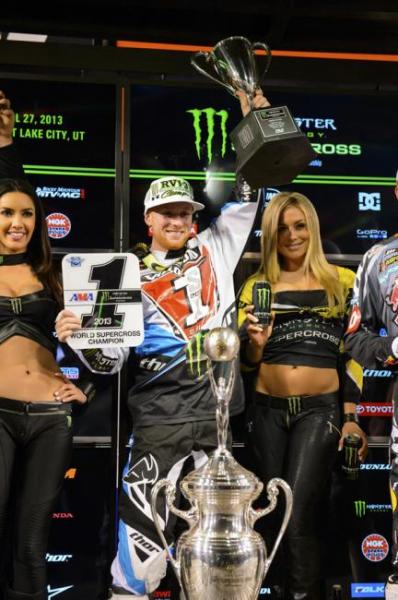 It’s weird if you go back to the Monster Energy Cup where Villopoto was arguably the fastest guy but crashed himself out of the million dollars for the second year in a row. He enters the season very similar to last year; he is now the three-time defending champion and his prowess sets the benchmark. Meanwhile, James Stewart has a lot of people talking with his form on and off the track. Two months ago Ryan and James threw down one of the best supercross battles we’ve seen in years, and they could very well lock horns again. Again, I hate to speculate this week because A1 is such an enigma. There are six or seven guys with a legit chance of winning the 450 class. There were five different winners in 2013 and with the additions of Eli Tomac and Ken Roczen to the field that number could grow.

Looking at the track "on paper," I think they did a great job with it. Anytime there are more left-handed corners than right there will be better racing, and we’ll get to see some block passing in the several 180 degree bowl corners. The start looks to be one of the longer ones Anaheim 1 has produced and unfortunately I think the long, left-sweeping shoot is going to see guys being punted off the track all night long. Especially in the opening heat races where everyone is super pumped up and nobody wants to let off. More to that end, I think we’ll see some big names be very happy with the new format offering the semi’s between heat races and the LCQ. 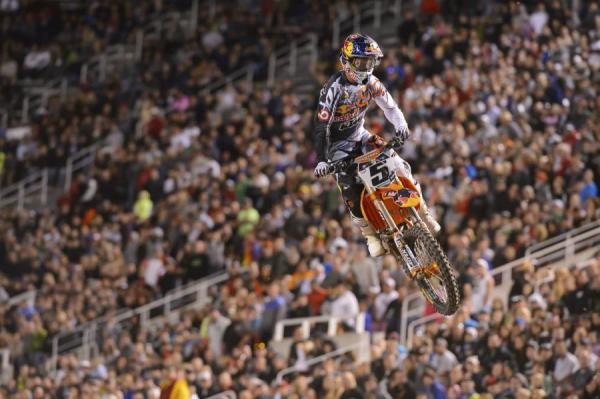 Can Dungey and the rest of the field strip the defending champion of his crown?
Simon Cudby photo

Of course we’ll all know more after the opening practice speeds are posted, and I can’t wait to just see the field finally out there on the track riding supercross again! American Supercross is such a strong and growing product. I respect it the most because there is no debate to the fact that we will be seeing the absolute best in the world. You cannot push the limits of traction, smoothness or speed on a motorcycle any further than these guys. Unfortunately, the danger element is at an all-time high and the machines have reached levels that perhaps the sport never intended. Supercross has changed and is changing, for better or worse. All we can do is sit back and worship and admire these racers, and hope the winds of fortune are merciful for 18 weeks. But… they won’t be. They haven't been in the weeks leading up to the series and they'll continue to offer no quarter. Sadly, racers will be injured and we’ll see horrifying crashes. This business commands as much respect as any trade in the world. These athletes push the envelope and face consequences that cannot be rivaled.

That’s why we’re all ready. From former racers to new casual fans the air leading up to Anaheim 1 is so thick with electricity that it’s hard to focus on anything else. Motorcycle fans are adrenaline fueled every time a gate drops anywhere in the world, but for this one time a year it peaks into frenzy. There is nothing like being inside that packed stadium when they hit the lights for the first time. The first rider intros, the first heat race gate drops, then the big gusher right before the first main event. No more waiting, no more speculation or bench racing. Its 2014 and the new season is here. The biggest and best supercross season in history is two days away. Time for Anaheim 1.