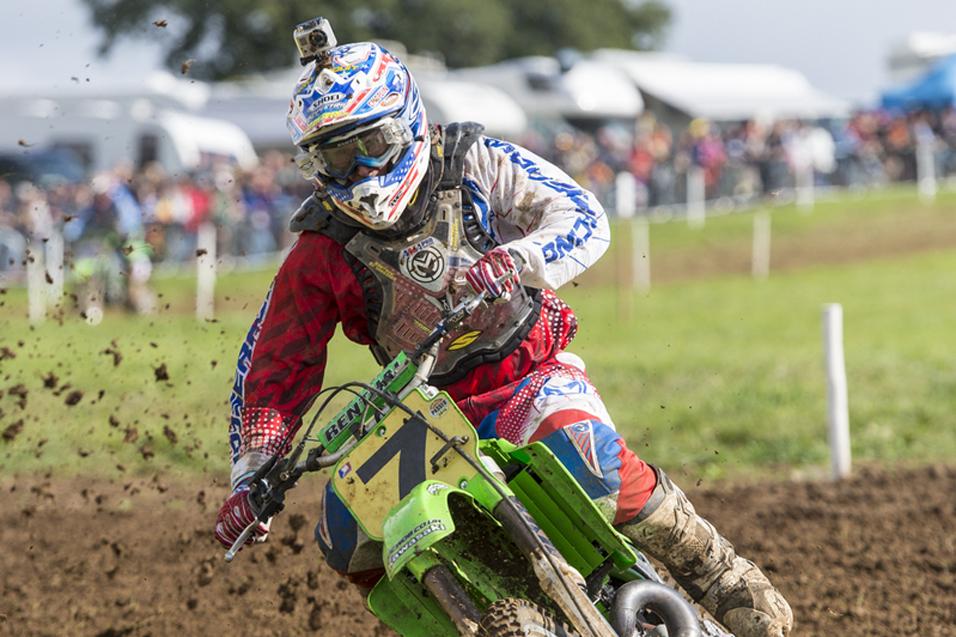 Advertisement | Advertise with Us
Apparently, it’s key to remember John Dowd only retired from pro nationals. The Junkyard Dog is alive and well, as evidenced by his surprising 1-1-1-1 four moto sweep of the Vet Motocross des Nations last weekend in Farleigh Castle, England. That makes JYD the first rider ever to sweep all four motos at the event, a positively Magoo-full performance! So what’s this Vet race all about and how did Dowd do it? We called him up late at night—after he was done working his regular job. Remember, Dowd no longer makes a living as a racer!

Racer X: Okay John, first thing I can say is that you really suck at retirement! You don’t know how to quit.
John Dowd: [Laughs] I know. My wife tells me that all the time. When I first met her I said I would only race a few more years, and that was 1992 or something!

So how did this race come about?
I was contacted last year by Dave King, who is the promoter of this. And [Doug] Dubach was pretty into it; he did it last year and said he had a good time. Last year I couldn’t make it, so they called me earlier this year, and they kind of hit me from all sides. King called me, Dubach called me, and Guy Cooper called me!

And this is a team race like the des Nations.
I guess so. They make it similar, not identical, each team has four riders and there are four motos—two on Saturday and two on Sunday—and they tally the points for the teams.

And you have to race on old bikes.
Yeah and you know, that was one of the reasons I wanted to go! I always loved the 500s, back when we still raced them in the 500 National Series. And I rode a Kawi 500 here, just like I did back when I raced the 500 Nationals. I kind of got to go full circle. The 500s seemed to die off, a lot of guys didn’t like riding those bikes, but I loved them, and when the series went away, I was kind of bummed. When I heard I could ride a 500 over there, it sparked some interest.

Did you have any prep on the 500 before you went over there?
Actually, I made an attempt. I pursued a couple of bikes, they’re around but most of them are pretty beat up. One guy wanted two grand for one, a 1991, but when I got there he raised his price to four grand. I didn’t need it that badly! So I didn’t have any time on one until I got there, and then when I got there, they had timed practice. I was like “Oh no!”

One total lap!
[Laughs] Yup. Actually, let me back up a little. When I first got off the plane, it was raining. I had only raced in England once in my life before, and that was the real des Nations in ’98, and that was just a complete mud fest, we ended up having all kinds of bad luck and everything. So when I got off the plane and it was raining, I was about ready to go home. Then when I got to the track and heard about the timed practice thing, I was ready to go home again! 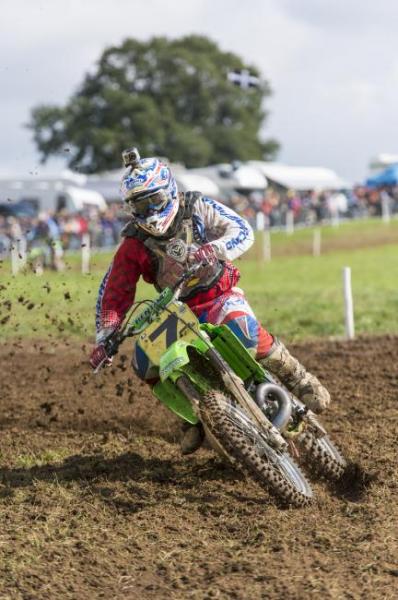 Safe to say you were not fastest in qualifying?
No I was like twelifh or something. I was actually happy with that, I wasn’t back in the twenties!

What was the track like?
Very old school. There were no jumps on the track except for a little downhill drop off that was very mellow. And it was fun that way! There were a lot of older bikes on the track, they had some vintage classes and twin shock bikes, so they track had to be old school for them.

So there were different classes?
Yeah, there were like ten different races, actually. And I actually did get out there on a twin shock bike, just for fun. I’d never ridden anything like that, I didn’t start riding until 1985, and they were all water cooled single shocks by then.

How was it?
For me, it seemed like the bike wasn’t very good in any way.

[Laughs] Wow!
I thought there would maybe be something good, like maybe it would be fast. But it wasn’t fast, it didn’t turn, the brakes weren’t good, it didn’t do anything good! I was looking for one thing good, but I never really found anything.

So in your main motos, on the 500, you did well.
Everyone on the team did good. Sean Kalos, he’s kind of coming off the couch, he doesn’t race at all. He had some problems with his arms and his hands just from not riding, but he did pretty good. Guy Cooper was solid, he’s always out there riding and stuff like that; he was perfect for the team. And Doug had one mechanical, but beyond that he got three elevenths, which was exactly what we needed to win it.

And you did well yourself.
I did. I won all four motos. I didn’t holeshot any of them. I had a few top five starts, and the last moto was the worst start, I started maybe fifteenth and really had to work for that one, I didn’t pass for the lead until the last lap. It was a cool deal for the fans, getting a nail biter like that.

You won all four motos! Did you expect that?
I did not. When I first saw the track, I was worried, it was hard packed with a lot of off cambers, and that’s never been my specialty. There wasn’t any sand anywhere. I thought for sure I was going to struggle on that 500 with the off camber turns, But I felt good. And it was fun to race with guys who I knew from years ago. Jean-Michel Bayle was out there and he rode pretty good. He kept holeshotting and stuff; I had to pass him in a lot of the races. It was cool seeing him out there.

Didn’t you and JMB battle in that famous Hangtown mudder in 1991?
Yeah. It’s funny you mention that, we were staying in the same hotel, and when we came out one time and it was raining, the first thing he said was, “Is this going to be Hangtown 1991!” We were joking back and forth about that. But I thought it was going to be a mud race, but the sun came out, and it was a little muddy in the morning, but the track worked out perfect after awhile. So it was cool to win all four motos, I guess no one has ever done that in this Vet des Nations thing.

You going to go back again?
I would like to, but now I’ve set a really high standard to try to match!

What’s your deal nowadays? Have you raced locally at all since the Southwick National?
I’ve raced a couple local races since Southwick. After Southwick goes by every year, my enthusiasm usually goes way down. But a few weeks ago I knew I needed to practice a bit and do some races to get back into it for this race. And the motos here were only 15 minutes long, and that was good for me because I can race 15 minutes pretty hard. A lot of the guys out there, they’ve been retired for a while and they don’t race as much anymore, so 15 minutes is a long time. But some of the guys were pretty current, Josh Coppins, everyone knows him, he’s pretty current. This guy Brian Wheeler was pretty fast, I don’t know him. Also Boonen, Gordon Crockard, Jacky Vimond, Werner Dewitt, Fredrick Bolley, Marc Eastwood, there were some pretty good guys out there.

They’ll be gunning for you next year!
Yeah, exactly. The track was just perfect, and to have good luck in all four motos, you know how racing is, that rarely happens. I don’t know, everything just worked out for me.

So the U.S. team wins, and you win the motos. Did they do a deal playing the National Anthem, and you got to wear American flags and all that?
It wasn’t quite that patriotic. They did a ceremony, like a podium thing, but that was over pretty quick, and then everyone heads to the beer tent!

And you had to get back to work?
Yeah I was working on Tuesday. I’m pretty busy here at home, doing construction, and being busy is a good thing. We have winter coming up here soon, so it’s always a big crunch time here in the fall for us, because everything slows down for winter.

It’s pretty cool to say you’re a construction guy, and, “Hey by the way, I flew over to England over the weekend and won a race.”
[Laughs] Yeah that’s pretty good. You know, the coolest thing about the whole weekend was that I wasn’t the old guy for once! We were cracking old guy jokes all weekend, but I wasn’t the oldest guy there. Guy Cooper and Doug Dubach, I was the young guy!