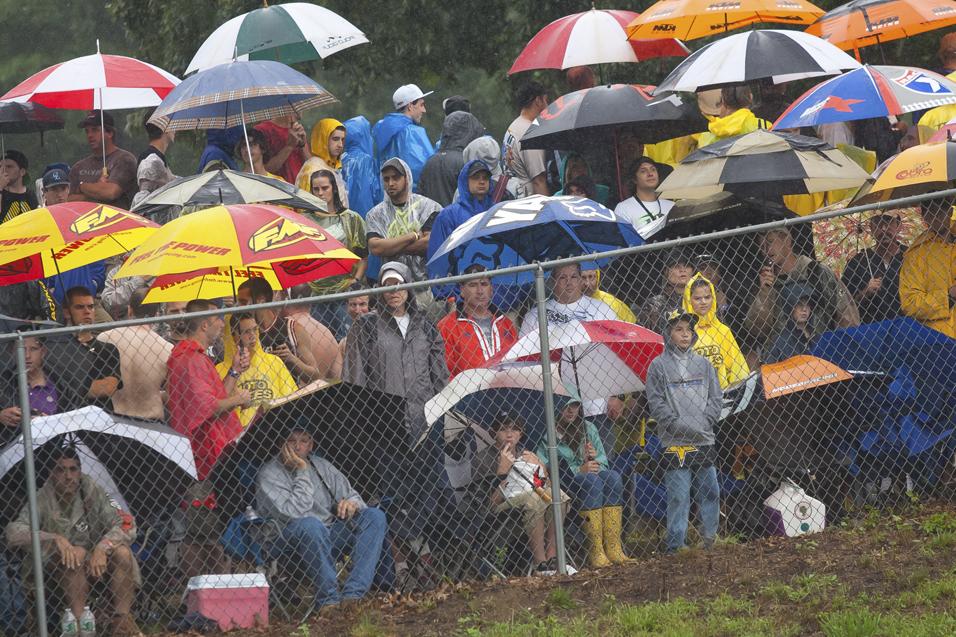 By The Racer X Staff

Last Saturday's first-ever Built Ford Tough Utah National was going along fine at Miller Motorsports Park until just after the start of the last moto for the 250 Class. At that point, as GEICO Honda's Eli Tomac was moving towards wrapping up the 2013 Lucas Oil 250 Pro Motocross Championship, a bizarre burst of wind hit the general area and turned the race into a tempest of wind, dust, flying banners and terrible visibility. Within a few minutes it was over, but the adventure of trying to hold it all down—bikes on the track, officials on the infield, fans along the fences—is something that we will all probably remember for years to come.

So what are some other "extreme weather" races?

15. 2005 Anaheim Supercross: Ah, the perfect storm. Maybe the most hyped opening-round field ever (Carmichael, Reed, Stewart, Pastrana and McGrath all on the same gate) got drenched due to El Nino (whatever the heck that was). It was a slopfest, and Kevin Windham won it.

14. 2006 San Francisco Supercross: There’s always a threat of rain at these NorCal races during the winter, but there was much more than a threat in 2006. This was a full on mudder! The main was cut short on laps, but James Stewart and Ricky Carmichael still battled so hard that they lapped the entire field! Nick Wey finished third on his privateer MDK Honda, which was awesome, but even he was a lap down.

Stewart won, passing Carmichael with two laps to go. How bad was it? We found this bootleg YouTube video. Have you ever seen Ricky and Bubba going so slow? 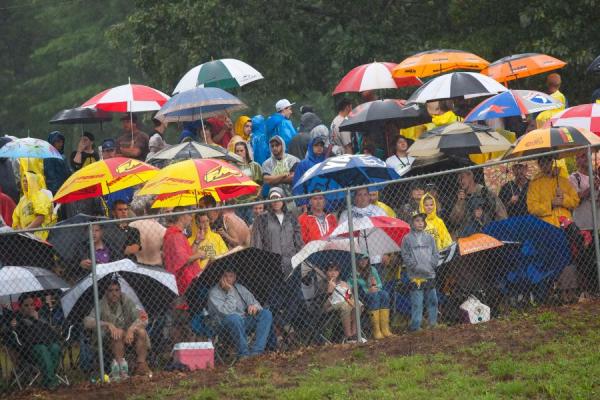 The umbrellas were out at the 2011 Southwick National as a hurricane blasted the New England coast.
Andrew Fredrickson photo

13. 2011 Southwick National: This one finished up just before a nor'easter/hurricane combo hit the New England coast, stranding some riders and race teams at Hartford Airport for a couple of days. There was a bigger scramble to get home than there was to get on the podium!

12. 2006 Millville National: Things were nice early in the day, and then the skies opened for the second motos.  It was such a mudder that most of the 450 field got stuck on one small hill! Ricky Carmichael somehow made it around without falling and became the first rider in series history to lap the entire field. 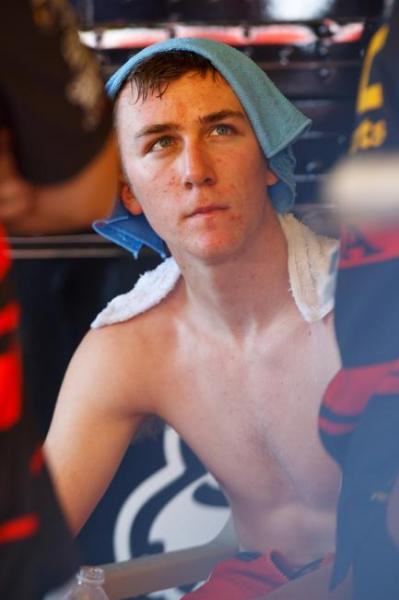 Eli Tomac and a host of others succumb to the Texas heat in 2010.
Simon Cudby photo

11. 1998 Motocross of Nations: Foxhill, England, was hit by a North Atlantic storm that made the short, steep hills of almost impossible for anyone to climb .... Unless you were Stefan Everts! The Belgian put on a masterful display of mud-riding that set the standard for excellence in global motocross.

10. 2010 Freestone National: Texas was a scorcher that day, with the thermostat on the wall of the press box reading 104 before the start of the first moto, and the heat index making it feel like a furnace. Eli Tomac melted down so much that the rookie would not be the same for the rest of the summer; same goes for Brett Metcalfe, who required immediate medial attention next to the race track. 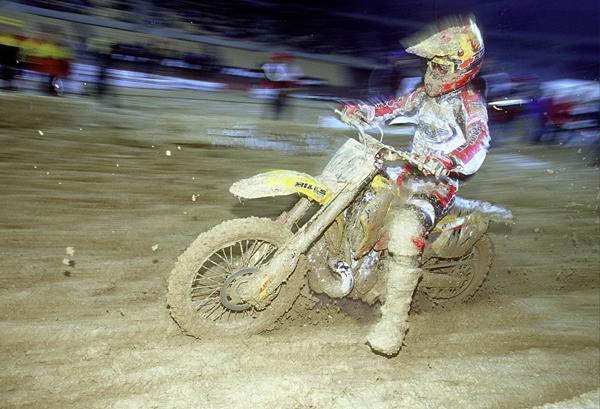 Darrly Hurley en route to the win in Spain in 2003.
Racer X Archives

9. 2003 FIM World Supercross in Seville, Spain: This race was besieged by storms, giving new meaning to that old rhyme about "the rain in Spain stays mostly on the plain." It seemed to all build up around the stadium and stay there, turning the track into dirt soup. Most bikes quit running due to fried clutches and drowned airboxes and ignitions. The winner? Darryl Hurley.

8. 2008 Daytona Supercross: Remember this one? That's the race where Chad Reed almost had it won, only to have his Yamaha let go three turns from the finish line, its motor melted down by the deep mud and blasting rain. Kevin Windham putted by to win, but the really extraordinary result came a Michigan privateer named Jacob Marsack, who finished third in the 450 SX main event. 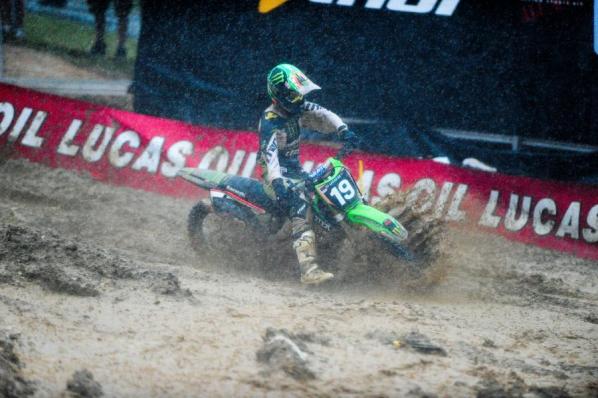 7. 1975 Snake River Canyon Race: Promoted as part of Evel Knievel’s notorious FAIL of a stunt jump over the Snake River Canyon in his X2 SkyCycle, the event included a high-dollar motocross race that attracted all of the stars of the day. But it was hotter than hell, and the track crews over-watered the place, turning a dusty track in Idaho into a muddy track in Idaho—well, half of it, anyway! It was bizarre to see riders covered in mud, then a layer of dust, then more mud, then more dust... You get the not-very-pretty picture.

6. 2009 Budds Creek National: This one started brilliantly when the 30-second board girl walked off the starting line after 9 seconds in 250 moto 2. The race had to be red flagged and restarted. Then it started raining harder and harder, and the ponds at the bottom of the track started to flood. The first turn had about three feet of water in it and the hay bales were floating! In the end the race was red flagged at the 25-minute mark because the conditions were so bad. 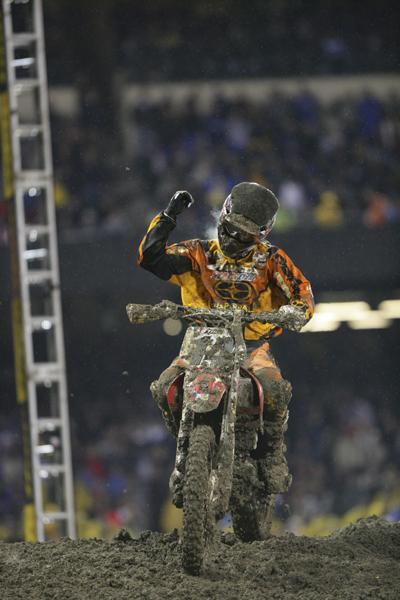 5. 1982-1983 Atlanta Supercross: The old open air Fulton County Stadium hosted some crazy races, usually a combination of mud and extreme cold. But it was exceptionally bad in 1982, and somehow even worse in 1983! Bob Hannah won the ’82 race, allowing every fan to sound like a genius for coming with “A Hurricane struck” after the race. In ’83, Hannah crashed in the first turn, and Mark Barnett took the win. As Cycle News explained it in the ’83 event coverage, “Ruts were deeper than a philosopher’s textbook.” Ironically, one of those ruts trapped the Little Professor, David Bailey, who nearly blew his ’83 title chances getting stuck out there.

4. 1976 Kentucky 500 National: In New Castle, Kentucky, the rain started pouring so hard that the track lap times slowed to over seven minutes. Pierre Karsmakers ran out of gas in the almost 55 minute moto! Adding insult to injury, during the 250 support race the automatic sprinklers came on. Ouch. Congrats to Gary Semics for a 1-2 overall win in the 500s. 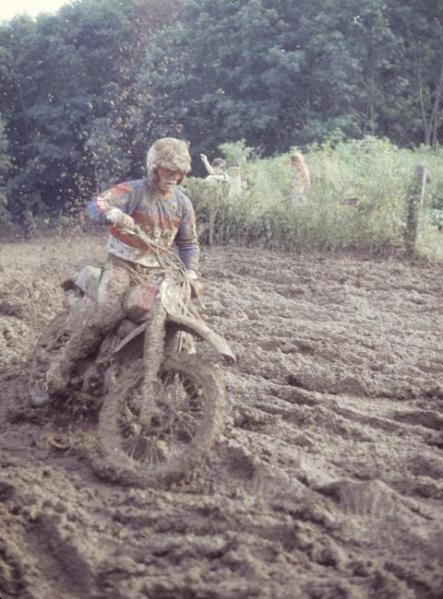 The weather turned on the 1976 Kentucky National.
Racer X Archives

3. 1987 Motocross des Nations: America’s first shot at hosting the world practically drowned under a non-stop deluge all Sunday long. It was a classic mudder, which should have struck fear in the all-California Team USA (Ricky Johnson, Jeff Ward, Bob Hannah), yet the Yanks pulled it out. It was a gnarly one, though!

2. 1991 Hangtown National: Northern California was getting drought-busting rain that simply flooded the Hangtown track. Seriously, the valley in the middle of the track turned into a river, and the entire race boiled down to who could get around without drowning their bikes. The AMA cut the race to one moto, and New England mud masters John Dowd and Doug Henry won the overalls. They were both privateers at the time. 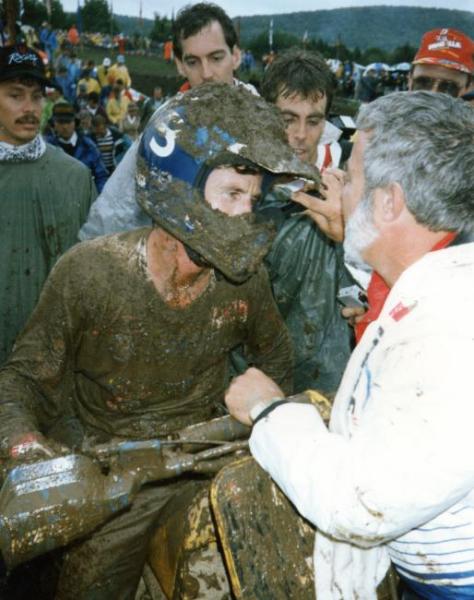 1. 2003 Kenworthy National: Twice! The Ohio track took on huge rain in the summer of ’03, and the river next to the track overflowed its banks and left the track underwater. The event was then postponed from mid-season to become the series finale in September. Things dried out and were looking good until another huge rain overflowed the river again, leading to a cancellation of the final round. That river might as well have been filled with Ryan Hughes’ tears—he was a close second in 125 National points behind Grant Langston heading into the finale, and they never had a chance to race it out.