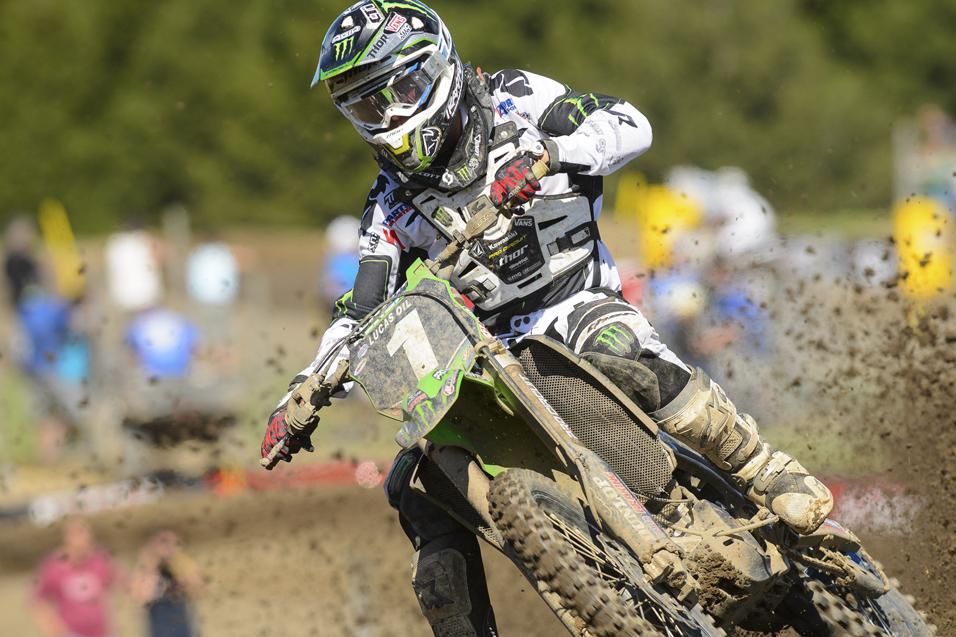 If this is how Ryan Villopoto responds after having a bad day at the races, his competition is likely hoping that the Monster Energy Kawasaki rider never finishes off the box again. After his worst performance of the year at Spring Creek (6-4 for fifth overall), Villopoto bounced back in a big way, absolutely crushing the competition at Unadilla. His fastest lap was almost two seconds faster than Dungey's fastest lap, and on lap five, Villopoto was an amazing 3.374 seconds faster than the next fastest time on that lap, which was also set by Ryan Dungey. Times like that contributed to his 20-second margin of victory in this moto. His opening pace was mind blowing, and absolutely nobody was going to match it. We've compared his times in the first six laps to those of Dungey, James Stewart and Justin Barcia in the table below.

Trey Canard had a good pace going in this moto as well; it was similar to that of Stewart and Barcia. Unfortunately we were robbed of witnessing any type of battle developing after a mechanical problem forced Canard off the track after just six laps.

Two names that have been popping up in this column regularly are Josh Grant and Andrew Short, and this week is no different. Both riders have really started putting the pieces together in the second half of the season, and in addition to their improved results, their lap times also show it. Their fastest times were within the ten fastest of the moto and were backed up by solid average times that weren't too far off their fastest laps.

Due to rider fatigue and a racing surface that deteriorates throughtout the course of the day, it's normal for lap times to increase as a moto wears on. But at Unadilla, the times increased more than normal, thanks to a track that got extra difficult toward the end. Guys like Dungey, Villopoto and Stewart all saw their lap times increase roughly six to eight seconds in the last quarter of the moto.

Apparently not satisfied with the whipping he handed everyone in moto one, Villopoto came out of the gate with both guns blazing again in moto two. Just how fast was he? On lap two, he was over five seconds faster than anyone not named Justin Barcia, and if we were to make the same chart as we did for moto one, it'd look pretty similar.

While we're on the subject of great rides, Barcia had a stellar one in moto two. As fast as Villopoto was, Barcia wasn't too far off the pace, as evidenced by his average lap time that was only three quarters of a second slower that RV's average. Sure, that differential will add up big time over the course of fifteen laps, but you're still doing something good any time you can put yourself in the same area code as Villopoto, especially when he's riding as well as he was at Unadilla. Check out the gap between the RV and JB best lap times and then everyone else.

It wasn't a battle we were expecting to see, but the long and intense Josh Grant/Ryan Dungey duel was still a good one. It seemed like every time Dungey would get close, Grant would respond, and Dungey wasn't able to get around until lap ten! Check out their times in laps three through ten.

The battle with Grant wasn't the only fight for Dungey. Late in the moto he came up on Jake Weimer, causing Weimer to respond with faster times. The battle was so heated that on the final lap Weimer's time dropped from 2:20.845 (already down from the previous lap's 2:21.304) to 2:18.566. Talk about a little last-lap inspiration!

It really shouldn't come as a surprise that Canadian MX1 Champ Brett Metcalfe had the eighth-fastest lap and was sixth in this moto. Even though he's largely been out of the scene here in the U.S. since his terrible crash in practice in the middle of last summer, he's still the same dude that won Southwick in 2011, and he killed it there again this year, going 5-6 for fourth overall. Metty's fast, and at Unadilla proved it yet again. 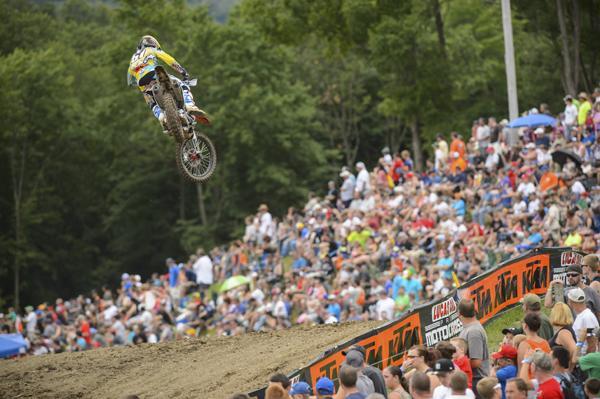 Eli Tomac put to rest any questions as to who the alpha dog of the 250 Class is at Unadilla. Although he had to work through the pack, again, in moto 1 Tomac still set the fastest lap of the moto with a 2:14.001. Furthermore, Tomac’s 2:16.376 on lap 11 was the third fastest lap set in the moto. As if that wasn’t proof enough, Tomac’s average lap time was bested by only eight riders’ fastest lap.

MyPlash/Star Racing Yamaha’s Jeremy Martin has begun to separate himself from the highly celebrated rookie class of 2013. Praised for his endurance and work ethic, Martin's lap times wavered little down the stretch staying in the 2:18-2:19 range.

One week removed from losing the red plate for the first time all season, Ken Roczen’s off-day came at the most inopportune time. Roczen started up front in the first moto, but trailed off down the home stretch. During laps 9-15 Roczen didn’t have a lap set under 2:20—he had eight straight laps under 2:20 to that point.

Blake Baggett was also mired mid-pack at the start of moto 1. While he wasn’t able to match Tomac—he finished the moto fourth—the defending champion still laid down stellar lap times. He put down the second fastest lap of the moto while coming through traffic and his 2:18.655 on the final lap was the best of the field. 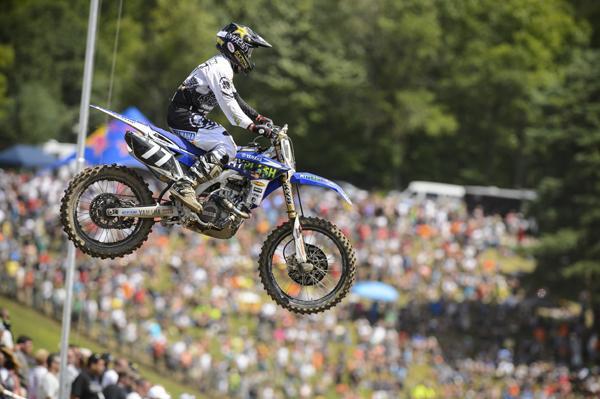 Tomac’s march toward his first outdoor title continued in moto 2, as did his superiority in the lap charts. Tomac accumulated nearly a full two second advantage over second-fastest Ken Roczen with a 2:15.647 compared to Roczen’s 2:17.538. The rougher the track got late in the race, the more Tomac shined—setting a 2:19.423 on lap thirteen, which was the eighth fastest lap set in the moto.

No doubt Tomac is the fastest rider in the class right now. But Roczen did his best to put up a fight once the battle began. Let’s take a look at their lap times over the final five laps to see where Tomac was able to put distance on Roczen. Obviously, you can figure on the last lap that Tomac backed it down. But Kenny never gave up!


Now our final chart. After two injury riddled seasons, Justin Bogle is finally healthy and showing the promise that had him on everyone’s radar in 2011. Bogle just missed his first podium appearance in the second moto, as Jeremy Martin executed a late pass to secure the position. Let’s take a side-by-side look at the final five laps between these two combatants.

As you can see, one mistake on lap 13 cost Bogle a ton of time, and that was all it took for Martin to catch him and take advantage. There's no room for error in the 250 Class!