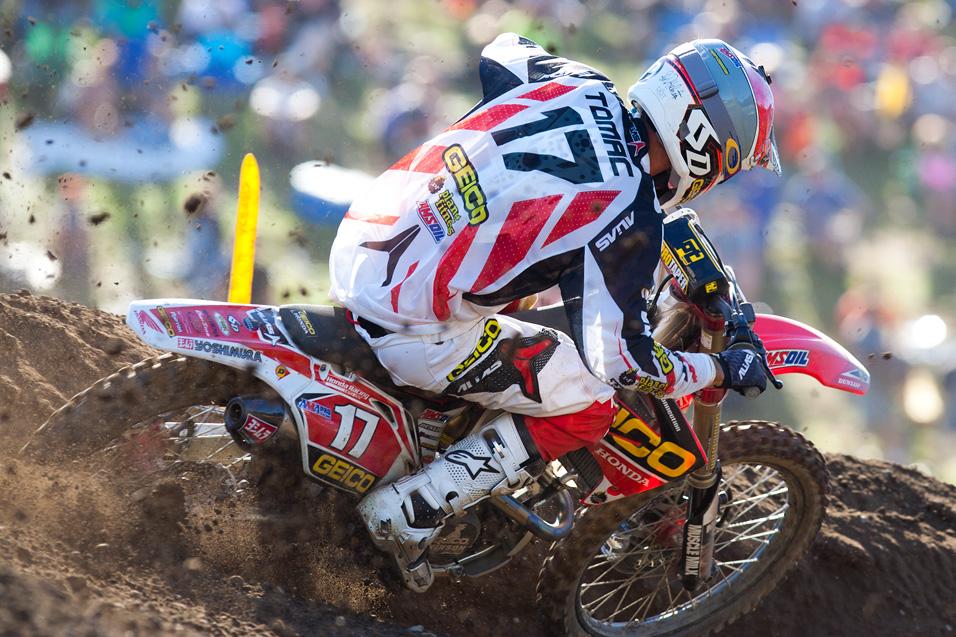 With each passing moto Red Bull KTM Ken Roczen’s first moto crash that resulted in a DNF at Millville—leading to a 25-point swing in favor of GEICO Honda’s Eli Tomac—proves more and more costly. After another impressive 1-1 run on the day, Tomac has extended his points lead to more than 30 over Roczen, who just a few weeks ago held a one-point advantage over Tomac entering Millville.

Monster Energy/Pro Circuit Kawasaki’s Martin Davalos secured the surprising Motorcycle-Superstore.com holeshot—his first of the season—over Roczen with the GEICO Honda duo of Justin Bogle and Tomac, along with MyPlash/Star Racing Yamaha’s Jeremy Martin, all in play.

Roczen, in desperate need of a moto win following a fifth in moto 1, quickly commanded the lead from Davalos. With Tomac buried behind Martin, Bogle and Davalos, Roczen began to extend the lead. But as we’ve seen in the past, no lead is safe with Eli Tomac on the track.

Tomac would trail Martin and Bogle for a brief moment before finally making a push around both, setting up a battle with Roczen for the top spot. The points leader quickly hooked on the back of Roczen’s wheel. The German held serve, shutting the door on Tomac’s advances. As each lap passed, Tomac seemed to grow stronger and stronger, eventually taking over the top spot. Roczen fought back for a brief period, but in the end Tomac proved again why he will be leaving Unadilla with the red plate.

Jeremy Martin made his way into third late in the race securing his third moto podium in the last four motos. Bogle, Blake Baggett, Zach Osborne, Martin Davalos, Wil Hahn, Marvin Musquin and Cole Seely would round out the top ten.