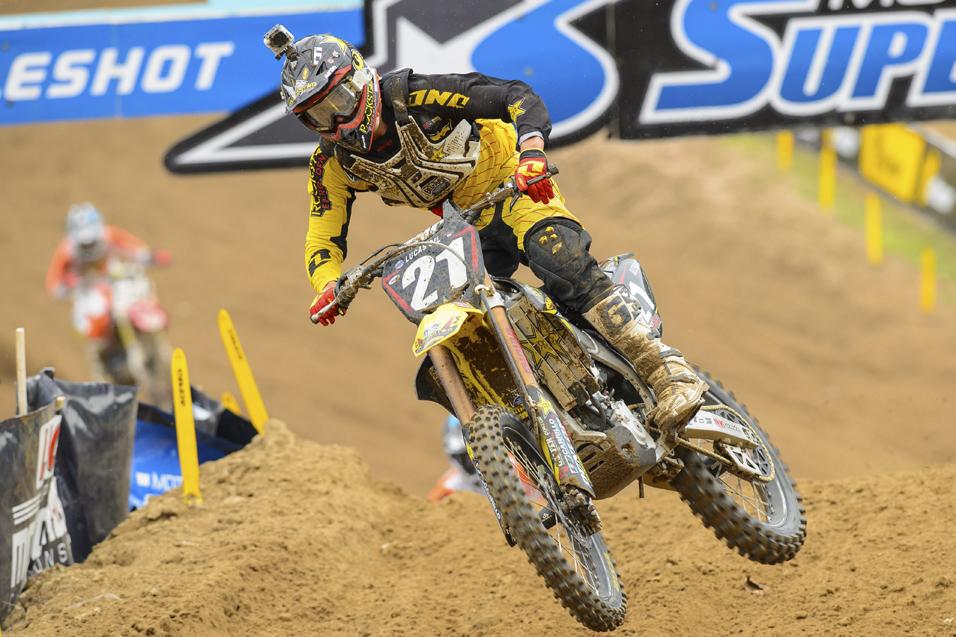 Love him or hate him, you can't deny that James Stewart was spectacular in this moto. Not only did he withstand tremendous pressure from Trey Canard, who also rode brilliantly, he set the fastest lap of the race. Let's examine the lap times of Stewart and Canard, in what we can all agree was one of the best battles of the season. The two didn't go at it hard until the final three laps or so, but we've included the last seven laps to show how Canard upped his pace when he got close to Stewart.

It's pretty rare for the fastest laps of so many guys to be so close. Check out the top five laps; they're separated by significantly less than a second! Part of the reason for this is that in anticipation of rain, the track wasn't prepped as deep and less water was put down. This translated into a bit of a smoother track than we're used to seeing at the Red Bull Spring Creek National, which allowed more guys to lay down some seriously scorching laps. The lower times added up to the longest motos of the year-18 laps!

The 450 Class is stacked. We've heard it so many times this year that at this point it just about goes in one ear and out the other. But seriously, it is! When was the last era you can remember that a rider as ridiculously dominant as Ryan Villopoto wasn't able to win despite crashing and remounting in just about dead last? Remember in 2008 when James Stewart could win no matter what? And when we say no matter what, we mean it; the dude went undefeated that year. Or what about Ricky Carmichael? There were some seasons where it seemed that he would have won even if he was still in the process of putting his gear on when the gate dropped. Well, those days are gone (for now), as Villopoto was only able to muster a sixth after going down early in the moto and watching the whole pack roar by.

Speaking of adversity, both the Ryans experienced some in this moto. We've already gone over Villopoto's crash, and Dungey had a chain come off early on, which he was able to wrestle back into place by himself on the side of the track. Let's compare the lap times of both Ryans as they were forced to fight through the pack.

When the second motos rolled around, the track had gotten rougher, which you can see in the fastest lap times. In the first moto, the top five times were extremely close. In this moto, the fifth-fastest lap is nearly a second-and-a-half slower than the fastest lap, which was set by Villopoto, who, thanks to a bad start and a crash, failed to win at least one moto for the first time this year.

Speaking of broken streaks, Dungey's five-race win streak at Spring Creek came to an end, although he was still able to get a moto win. He had to go through Stewart to get it, but when he made the pass for the lead on lap four it looked like it was all over. But Stewart fought back and retook the lead on lap six! He'd been able to go hard to the end to beat Canard in the first moto, could he do it again against Dungey? Nope, although Dungey didn't immediatley open up a huge gap after taking over the lead for good on lap seven. Check out what the battle looked like on paper through lap ten.

How about Andrew Short? After a bit of a slow start to the season, the BTO Sports KTM rider has been excellent at the past several rounds, which continued at the Red Bull Spring Creek National. His fastest lap of moto two wasn't one of the ten fastest (in moto one he was ninth fastest), but he was extremely consistent. He had no big spikes in his times, and he even turned thirteen of seventeen timed laps within nearly two seconds of one another in the second moto. He went 7-8 for sixth overall.

Another rider that's worthy of note lately is Broc Tickle. At Spring Creek he set the eighth-fastest lap (one thousandth of a second slower than Reed's best lap!) in the first moto, and the sixth-fastest in moto two. At the end of the deay, he'd earned tenth overall via 8-10 moto scores. 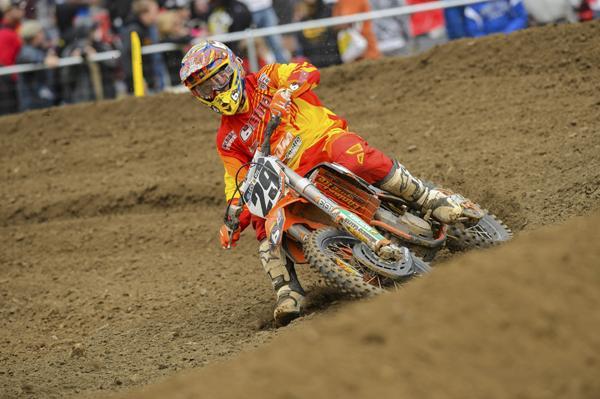 Eli Tomac’s march to the red plate continued at Spring Creek. Following a 1-1 performance, Tomac holds the coveted red plate for the first time since Freestone in 2010—his rookie year. Tomac was forced to dig himself out of an early hole (fourteenth after lap 1), but still set the fastest lap in moto 1 with a 1:57.309. Tomac and MyPlash/Star Racing Yamaha’s Jeremy Martin were the only two riders to set a lap below 1:58.

It’s been a long time coming for Rockstar Energy Racing’s Jason Anderson. The New Mexico native, who was tabbed as the next big thing after turning pro, finally broke through for his first career moto podium in Lucas Oil Pro Motocross. Anderson would set the fourth-fastest lap of the moto (1:58.691), which was just over a second slower than Tomac’s. 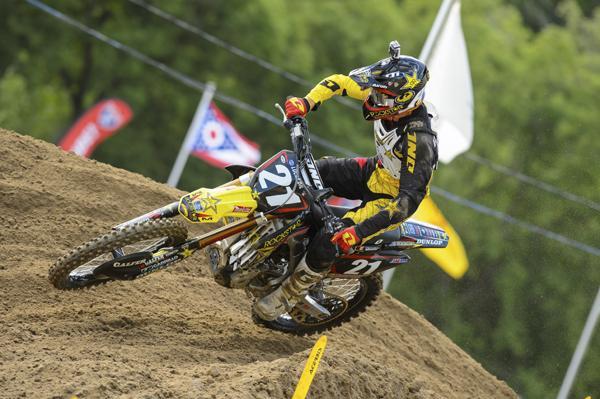 Another brilliant performance from Eli Tomac followed in moto 2. Once again mired in a bad start, Tomac ran off tweleve consecutive laps under 2:00 minutes to roar into the lead—bypassing title contender Ken Roczen in the process. Tomac was joined by Blake Baggett as the only two riders to set laps under 1:58 in the moto.

Although he lost the points lead--and the second moto win--at Spring Creek following a brutal crash in moto 1, Ken Roczen did salvage some points on the day with a gutsy second in moto 2. Roczen set the third fastest lap of the moto and even led for a brief period. Let’s take a look at see how Tomac took the lead from Roczen.

GEICO Honda’s Justin Bogle has quietly worked himself into a consistent top-five threat following numerous injuries throughout the past two years. Bogle pieced together another solid performance at Spring Creek, just missing out on a top five spot. He would set the sixth-fastest lap of moto 2.