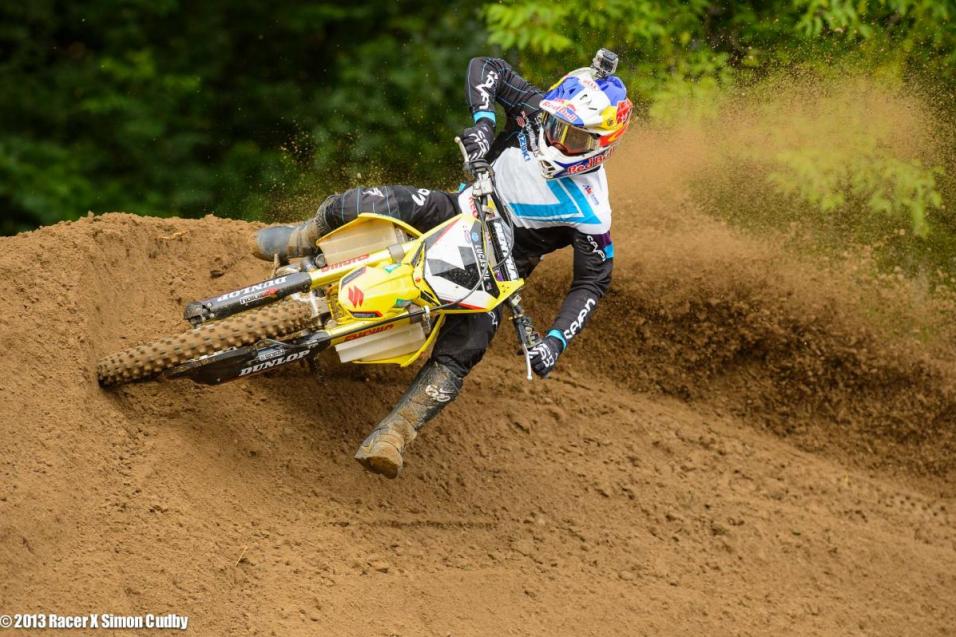 The sky looked rather gloomy as the 450 riders lined up for the first moto at Spring Creek, but as we know from year’s prior, the weather rarely cooperates here. Regardless, the motos go on. Justin Barcia edged out Josh Grant for the Motorcycle-Superstore.com holeshot. Grant was forced wide, went off the track slightly and lost a few positions. Barcia’s teammate Trey Canard followed in second and Ryan Villopoto was there for third. Villopoto, however, was left behind after being thrown from his bike just before the infamous Millville whoop section. Ryan Dungey and James Stewart were there to pick up the positions, while Villopoto remounted and crossed the finish line outside of the top twenty.

Stewart was able to get by Dungey, and once in third, he set his sights on the Honda Muscle Milk duo of Canard and Barcia. Stewart moved by Canard, but that pass was far from sealing the deal. The two went back and forth over the course of a lap before Stewart put the hammer down and pushed past Barcia for the lead. Meanwhile, Dungey had bike problems and had to momentarily pull of the track, sending him back to 11th. The Honda Muscle Milk riders were able to stick with Stewart, but Barcia got squirrely of the finish-line tabletop and gave up second to Canard. That was all Canard needed to up the ante.

From there, the rain started coming down and an epic battle for the lead between Stewart and Canard had begun. The two riders were using the entire track as they passed each other back and forth for first. Canard must have been feeling it, because he was throwing down some impressive scrubs as he tried to work around Stewart. However, Stewart controlled the lead as the checkered flag came out and it seemed as if Canard had either exhausted his line options or fell into Stewart’s pace. Canard made a late-moto charge as they neared the finish line, but was unable to find an opening. Stewart won his first moto of the season, with Canard and Barcia rounding out the podium. Grant and Dungey rounded out the top five, and Villopoto made an impressive charge all the way back up to sixth.