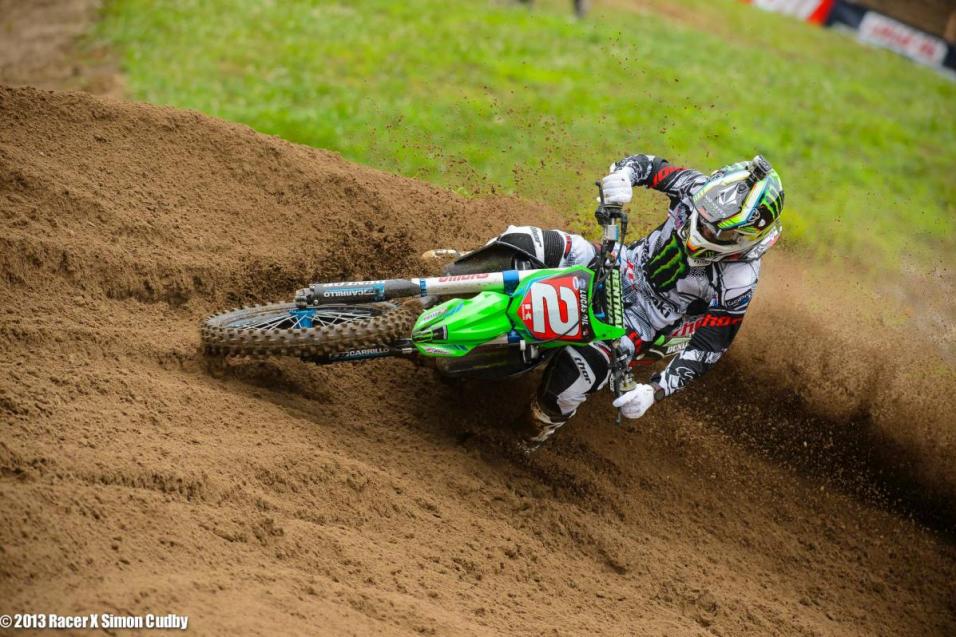 The start of the second 450 moto was quite opposite in comparison to the first moto. This time around, most of the major players started up front instead of being scattered throughout the field. Ryan Villopoto was right there around the first turn and ready to take the Motorcycle-Superstore.com holeshot award, but Ryan Dungey cut to the inside to take home the cash prize. Dungey may have led around the inside of the left-hander, but Villopoto regained the lead by being set up for the next inside right-hander.

Justin Barcia and James Stewart were right behind the two Ryans to keep them honest, and Phil Nicoletti started off with another good start in fifth place, but fifth back to fortieth soon became a race of their own. Villopoto, Dungey, Barcia and Stewart separated themselves from the rest of the field within the first few laps. Fast forward a few more laps and the two Ryans had unhitched from the four-rider train and shoveled in more coal to steam ahead. Dungey initially lost some ground on Villopoto as they began to stretch the gap between themselves and third place, but it only took a couple of laps for Dungey to close back in and apply some heat. With time, though, Villopoto inched away from the Red Bull KTM rider and left him by himself.

As the battle for the lead flamed out, two new battles caught some spark. Stewart reeled in Barcia, and Metcalfe—who advanced from seventh to fifth—found new company in eleventh-place starter Trey Canard. It was impressive to see Canard and Stewart back out charging in the second moto considering the soil samples they took in the first moto.

Though Stewart had closed in on Barcia, he wasn’t close enough to take advantage of any passing opportunities. Stewart slowly drifted off of Barcia’s pace, but the gap between them never extended more than a few seconds.

Canard had rode on Metcalfe’s back wheel for a few laps before he was able to make a pass happen. The Honda Muscle Milk rider held it wide open after the finish line tabletop and drag raced down past the signal area before sealing the deal.