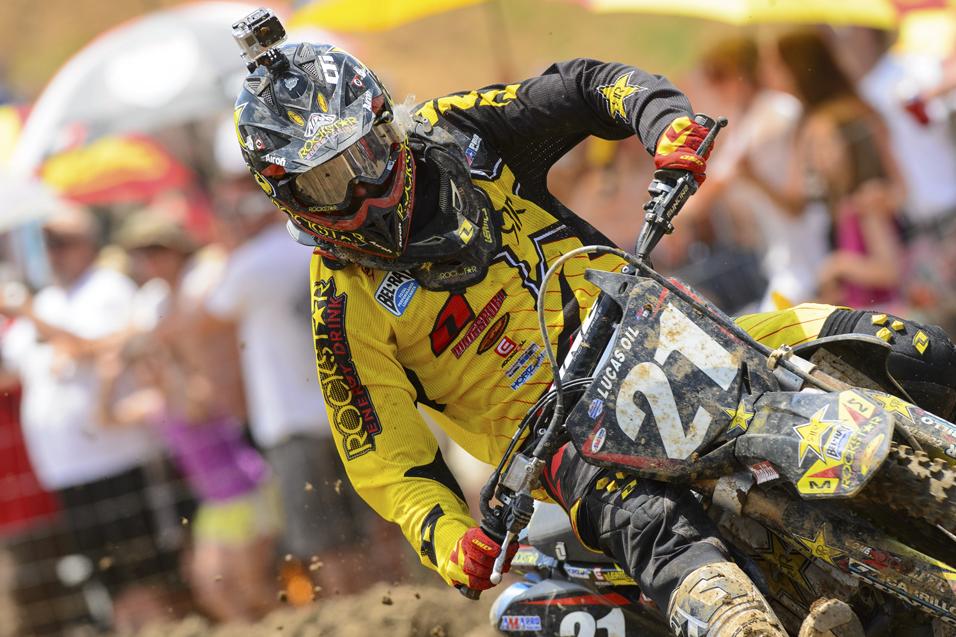 - There were raves for the Muddy Creek facility as a whole, as the place packed in the fans and provided them with some great views of the racing thanks to its in-the-valley layout. The track received mix reviews from the riders, though, as some, especially the 450 riders, said it was too tight and too small and hope to see things opened up a bit for next year.

- The Belgian duo of Clement Desalle and Kevin Strijbos after heading back to Europe after their two-race American adventure. Many thought the heat of humidity of the south would affect the Europeans, but Desalle and Strijbos adapted well. Desalle was very strong late in the first moto, tracking down Mike Alessi for fifth and closing right to the rear fender of James Stewart on the last lap in an attempt to get fourth. In moto two, he looked to possibly have the holeshot but slid out on the exit of turn one, going down. He then came from way back to finish ninth. Strijbos, meanwhile, was back early in both motos (in moto two, he actually got held up when Desalle fell in front of him), but he was able to claw back to 14th and 7th, place finishes, respectively.

- Trey Canard had been Mr. Consistent through two rounds, having yet to finish outside the top five. Another top five finish seemed to be in the works in the first moto, as he ran third early. But a huge crash just before the finish line ruined chances. Canard had to pull in for repairs, but did return to finish 29th in the moto. He bounced back in the second, holding off Ryan Villopoto in the last corner for his first moto podium of the season. 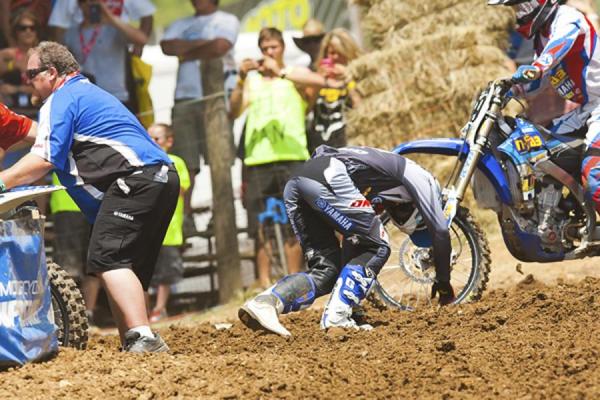 - It’s been a rough beginning of the season for JGR/Toyota Yamaha—with a seemingly ever-present dark cloud hanging over the team. For a brief moment on Saturday, the cloud parted, and the sun shined through. Josh Grant was the fastest qualifier, in both sessions, and both riders had top ten finishes in the first moto—Grant seventh, Justin Brayton tenth. But the cloud returned in the second moto. Brayton was involved in that huge first turn pile-up, and the crash damaged his bike to the point where he couldn’t continue. Meanwhile, Grant had problems with his engine cutting out, probably an electrical issue, and he had to pull into the mechanics area, ending his day.

- Rock River Yamaha’s Ben LaMay was back after missing the first two rounds with a knee injury. LaMay admitted he wasn’t 100 percent coming in, and then he tweaked the knee in moto one and didn’t finish. He came back in moto two and gutted out a 15th for 23rd overall.

- Munn KTM’s Vince Friese, who’s on his third bike and second class in 2013, was great in the second moto. The Missouri native keep pace with Chad Reed all moto, finishing 14th.

- Robby Marshall, who’s been piloting a KTM 450 during the first two rounds, was on a KTM 250 two-stroke at Muddy Creek. Marshall qualified inside the top 20, but was a victim of the Trey Canard crash, as he hit Canard’s bike coming off the blind jump. Marshall would not return for the second moto and early reports are he may miss a few rounds with a shoulder injury. Here’s hoping Robby can make it back for his home race at Southwick, at least. 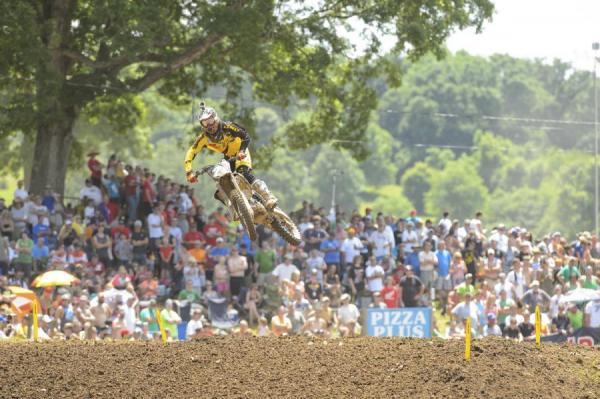 - Add another weapon to the arsenal of GEICO Honda. Justin Bogle is back. Bogle stormed onto the scene at Unadilla following his 2011 Horizon Award performance at Loretta Lynn, but has dealt with injury after injury during his two full-time professional seasons. After leading briefly in the first moto, Bogle crashed fell back to 28th then proceeded to carve up the pack to salvage twelfth. The Oklahoman was strong again in the second moto battling inside the top five before eventually finishing sixth.

- MyPlash/Star Racing rookie Cooper Webb’s second moto misfortune continued at Muddy Creek. Following a hard fought fifth in the first moto, Webb was battling Marvin Musquin for second on the first lap of the second moto, but he cross-rutted and crashed in the big sweeper following the finish line. The mistake left Webb in dead last. Fitness is a big strength of Webb and it showed as he fought back to a 15th place finish.

- It was a tough day for Webb’s rookie teammate Jeremy Martin. The other half of the 1-2 rookie punch was mixed in with the huge battle for the top five in the first moto but a problem left him in 21st. He would recover for a tenth in the second moto after coming from deep in the pack.

- The older brother of Jeremy, Alex, had his best ride on the young season. The Eleven10 Mods Yamaha rider, who missed all of Monster Energy Supercross with a wrist injury, put together consistent 15-16 scores for 16th overall—one spot behind his brother. We’re sure that will provide motivation for Alex this week.

- Monster Energy/Pro Circuit Kawasaki’s Darryn Durham, although still not 100 percent from his huge crash at Hangtown, was in position for a top ten finish in the second moto before going down on the inside after The Bomber triple. Durham would finish the moto in 17th. 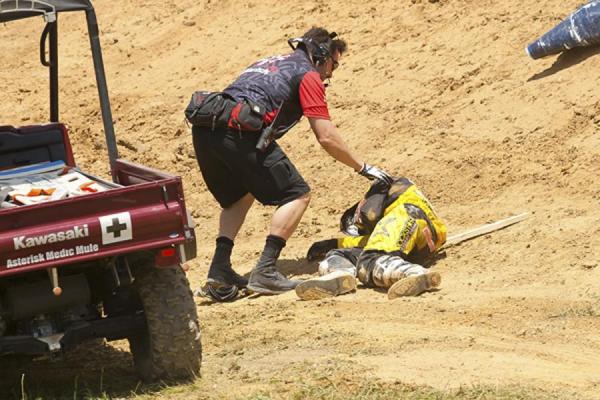 Nico Izzi had a big crash in the first moto and did not return for the second.
Andrew Fredrickson photo

- Rockstar Energy Racing’s Jason Anderson evolution continues. Two years removed from a disastrous rookie campaign, Anderson has morphed into a consistent top five threat that seems a breakout ride away from truly challenging for podiums week-in and week-out. Anderson was solid again at Muddy Creek, mixing it up in that huge battle for the top five in the first moto, eventually finishing seventh, and came from outside the top 10 to secure seventh in the second moto for sixth overall.

- Nico Izzi was in the midst of his best ride of the season since his return from ACL surgery—that caused him to miss all of Monster Energy Supercross. Izzi was on the cusp of the top ten before a hard crash. Izzi would not return for the second moto. We will update his progress for this weekend as more news becomes available.

- While other rookies have garnered a majority of the attention, FMF/Orange Brigade KTM’s Joey Savatgy is starting to find his place amongst a very deep field. Savatgy scored his second top ten of the season in the first moto and followed it with a solid 12th in the second moto. 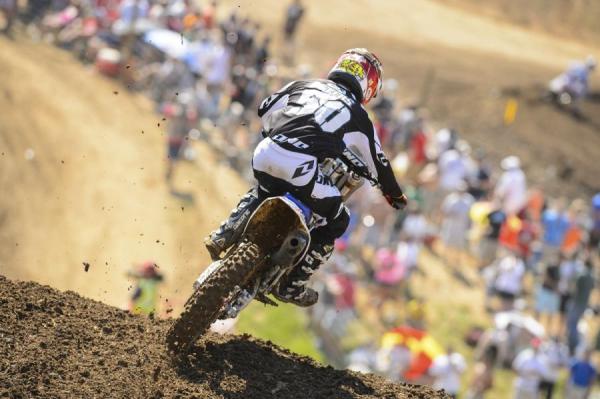 - IN OTHER ROOKIE NEWS: Mitchell Oldenburg made his 2013 Lucas Oil Pro Motocross debut at Muddy Creek. Oldenburg failed to score any points in his debut, going 25-22 for 25th overall. Dillan Epstein continues to prove his merit in the 250 Class. Following back-to-back weeks as the top privateer Epstein finished 17th in the first moto but had problems in the second moto—finishing 39th. Eleven10 Mods Yamaha’s Brady Kiesel continues to fly under the radar. The Texan had a great ride in the second moto, finishing 18th—his best finish of the season.

AG Motorsports’ Kyle Peters was back in action after missing the first two rounds with a strained shoulder, hip and ribs. The second year pro would finish 20-21 for 22nd overall in his return.

Much better this week for Witt’s End Racing KTM’s Les Smith, who had failed to score points in the first four 450 Class motos. The South Carolina native went 17-18 for 19th overall at Muddy Creek.