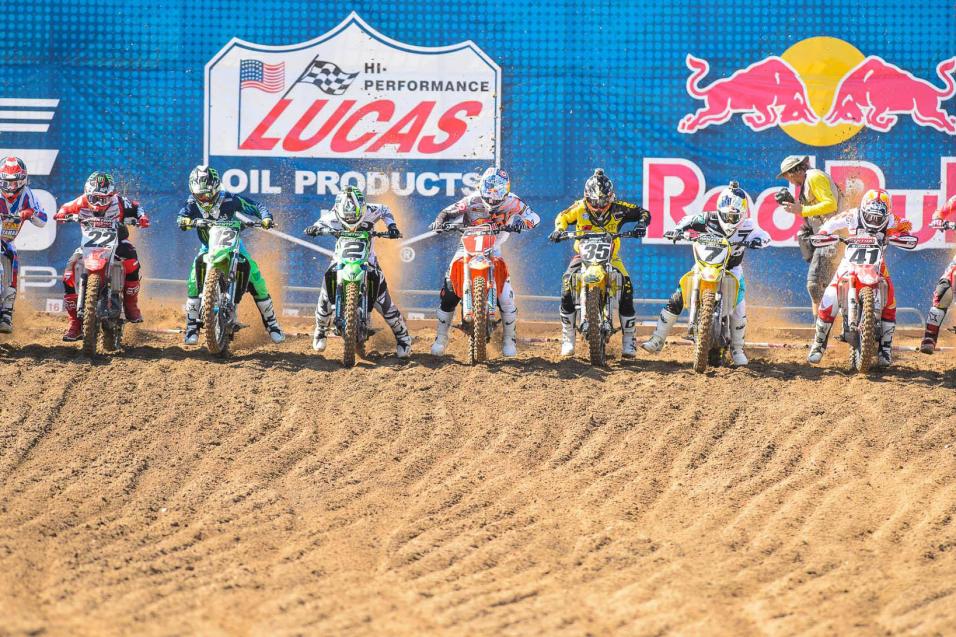 After Hangtown, we all need to stay the course and believe in the “stacked field” theory we had coming in. But it won’t be as easy as it seems, because Ryan Villopoto and Ken Roczen didn’t just go 1-1 in the 450 and 250 classes, respectively, they dominated the proceedings. Don’t they know you’re not supposed to be able to do that in a stacked field? They even passed most of the riders expected to challenge them this year. Villopoto made moves on James Stewart and Ryan Dungey in both motos to get to the lead, and Roczen did the same to Blake Baggett, Eli Tomac and Marvin Musquin in the first moto. Roczen passed Baggett again in moto two.

But before we go too far, it’s worth reminding how often Hangtown actually doesn’t indicate the way the rest of the season will go. Just think back to Villopoto struggling here in 2011, only to come back and win the title. Or James Stewart winning here last year only to crash out of round three. Or Chad Reed winning in 2010 during an ill-fated season with Kawasaki, while eventual champion Ryan Dungey struggled. That’s the way it goes sometimes. But only sometimes. Baggett won Hangtown last year and held the red plate all season. 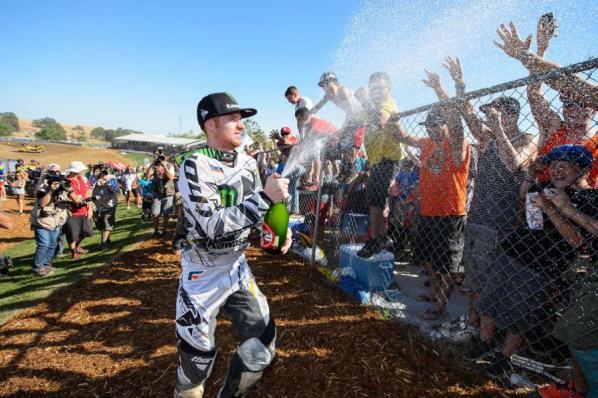 Round one doesn't always serve as a clear indicator of the season ahead. But when Ryan Villopoto wins a race, it sure doesn't feel like a fluke. 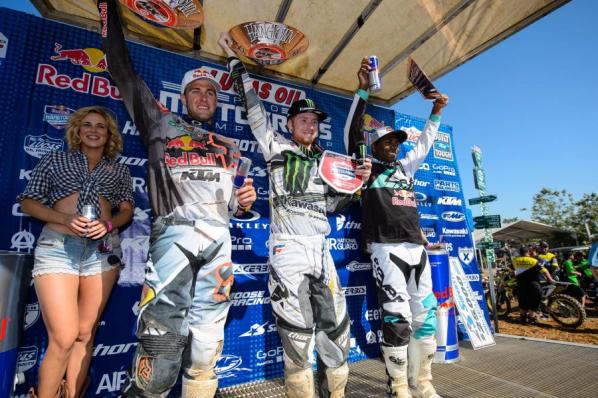 On the other hand, Dungey and Stewart seemed plenty happy with their podium rides and what's to come.
Cudby photos

Villopoto said he learned a valuable lesson in 2011 with his early-season struggles. While his Monster Energy Kawasaki team didn’t have a lot of time to prepare for Pro Motocross during the brief break from supercross, “We were determined not to put ourselves in that position again.” So far, so good. Of note, Villopoto had the newest version of the Showa airfork on his bike, the triple chamber, and he said it was quite plush on the rough Hangtown track.

James Stewart grabbed both Motorcycle-Superstore.com holeshots on his Yoshimura Suzuki, but it didn’t appear that he put in a concerted effort to hold the lead in the first moto. He was content to ride his own pace, and he didn’t give much of a fight when Villopoto or Dungey went by in moto one. After the moto, he admitted his number one goal this season is to just get through all 24 motos, which he hasn’t done in a long time. James appeared to just ride a comfortable pace and stay safe. He fought harder in moto two, fighting back Dungey’s advances for nearly 15 minutes. But then Dungey bobbled and Villopoto took over second, and RV immediately went inside of James over a jump and took the lead. Then Dungey passed Stewart, too. But Stewart again said he was happy with performance with 3-3 on the day.

Also consistent were the Honda Muscle Milk boys, Trey Canard and Justin Barcia. They went 4-4 and 5-5 on the day, respectively. Canard even hung with Villopoto in a battle for third early in moto two. That’s a solid outing for Canard’s first outdoor performance since Washougal in 2011.

Roczen clearly had something extra compared to his 2012 performances. He said he simply trained harder this year, especially in the pre season before supercross. Laying down that base fitness helped, because Kenny admitted that for the last two weeks, he’s been just having fun with friends, like learning to surf and going to a trampoline park. He even ate two In N Out burgers on Thursday! “What can I say, I like to keep it fun sometimes,” says Roczen. “After this I’ll be back at it with hard training.” 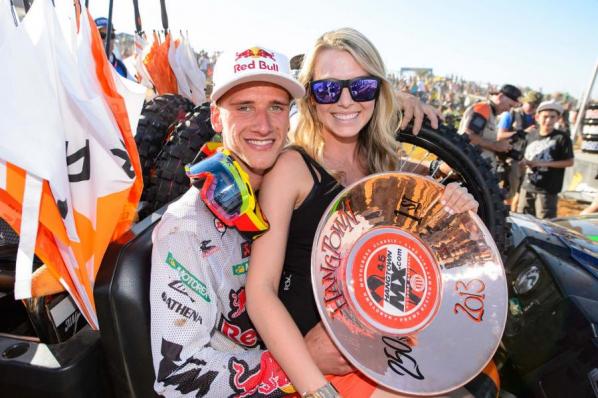 With GP and SX titles to his credit, it's hard to believe this is Kenny's first overall MX win in the U.S.

Baggett’s wrist is not 100 percent after his big injuries in supercross back in January. He has hardly any range of motion in it, and he said it was sore all day. Considering that, he rode well for second overall, and even showed flashes of his old El Chupacabra self with some late-race charges. In the second moto, for a few laps, he pulled Roczen back in sight and looked ready to go for the win. But unlike Hangtown last year, it wasn’t enough to go get Roczen—partially because Roczen seems stronger this year, and partially because Baggett is still dealing with wrist issues. It’s anyone’s guess how this injury impacts this series goes moving forward—even Baggett doesn’t know what to make of it, and, he says he’d rather not use it as an excuse, anyway. “Everyone is dealing with injuries at one time or another so I just have to deal with it, I’m not going to use it as an excuse,” he said.

Eli Tomac was right in the mix, as well. He wasn’t quite able to match Roczen’s mid-race surge in moto one, and didn’t get a very good start in moto two en route to third. No cause for panic in the Tomac camp, he has established himself as a sure-fire front runner in this series. 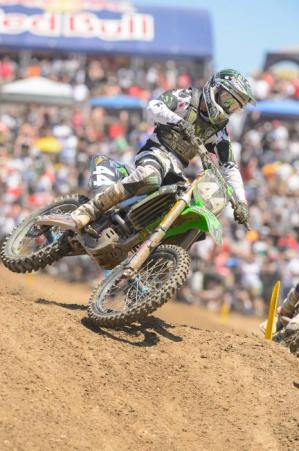 It was good to see the #44 of Darryn Durham back in action, as he missed a year of racing with recurring shoulder problems. He was fast at Hangtown, too.
Cudby photo

Marvin Musquin was probably not quite as happy with his day, as he finished just off the podium in fourth, and that included a first-to-fourth struggle midway through the first moto. Fifth came GEICO Honda’s Zach Osborne, and he and Musquin were close at times. How close? They came together in moto two and both ended up on the ground, yet they charged back to salvage top-five moto finishes, anyway.

Lots of fast riders in the 250 class will have results that don’t show how well they rode. Darryn Durham was sixth in moto one, but had a huge crash in moto two. He was uninjured, though, and very fast all day. Durham was impressive considering he missed all of last season with a shoulder injury. Expect better things when the series moves east. Jason Anderson was fast in practice but took 12th in moto one. He came back for sixth in moto two. Cooper Webb was a solid fifth in his first pro moto, and was fighting and battling down the stretch of moto two to hold onto a top ten. But he stalled on the last lap, dropping him to 18th.

Not a good day for regular 450 contenders Chad Reed and Mike Alessi. Reed was sick all weekend and didn’t finish the second moto. Alessi struggled throughout and had a crash in moto one. He was eighth overall.

On the other hand, Ryan Sipes surprised on the Rockstar Energy Racing 450, the bike that was supposed to belong to the now-injured Davi Millsaps. Sipes was a solid sixth overall. Also, huge props to privateer Weston Peick, who was tenth overall and eighth in moto two. Somebody give Peick a ride!