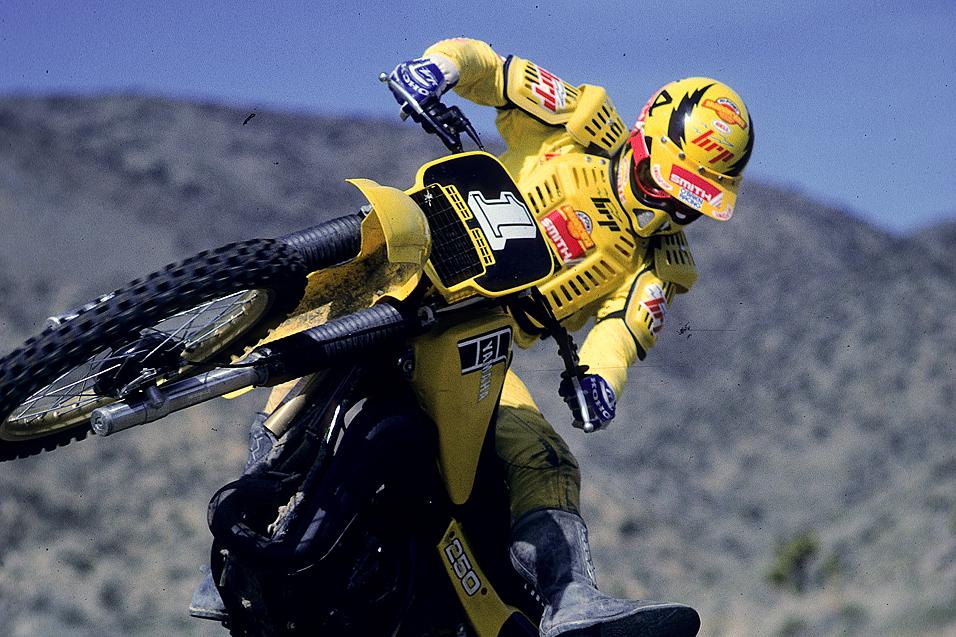 May 9, 2013 11:10am
by: Andy Bowyer
Hello, everyone, and welcome to the Rev Up. There is no sport in the world like motocross. With the 2013 Lucas Oil Pro Motocross Championship only a week in the distance, I wanted to write about some of my favorite memories over the years.

My motocross recollection began in the early 80s and my first bike—a brand new 1982 Y-Zinger PW50. With it came a yellow Yamaha jersey that had white lightning bolts down the sleeves. That was my first mental image of a motocross hero—Bob “Hurricane” Hannah. Being five years old and from Kansas I had no clue what a hurricane was, all I knew was that the lightning stood for Hannah, and hurricane must have meant fast. To my frustration, all I ever got to see of Hannah was a junk VHS tape of the 1986 USGP that had been rewound a thousand times (the one where O’Show runs out of gas.) Then, on my first trip to Ponca City for the old Grand National Championships Hannah was there in person. He had the same parted hair as he does today, and he went out at intermission and did some laps. I remember digging my feet into the chain link fence and resting my elbows on the sharpness at the top to get a better look. Afterward, I ran straight over to the Suzuki pits with my event program and got an autograph. Roughly 30 years later I remember his white polo shirt with Suzuki embroidered on the left chest in blue. I remember not being able to talk and just giving him a thumbs up and then sprinting back to our camper to stare at the signature. 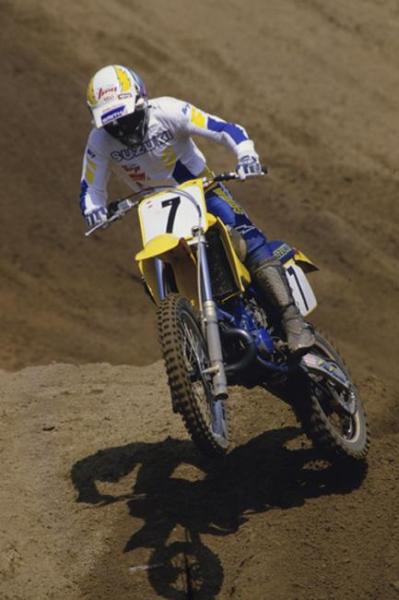 Growing up racing every weekend at the local and national level rewarded some memories of riders that weren’t the superstars I read about in the magazines. Yet. Oklahoma’s Robbie Reynard remains the most amazing rider I ever saw. From 60s, to 80s, all the way to his pro career he did things on the bike that made people shake their heads. It wasn’t incredible jumps, or hitting a berm wide open that made him stand out to me, it was simply the nonchalant style. I was one of the fastest kids in the country, but at the local races he would always let us go to the first corner before taking off. On my best days I could hold him off until the last lap, then he would pick a different place to pass me every time. Later in his pro career, the Fox Racing guys started putting “Bionic” on his pants because when Robbie was in the zone he barely moved on the bike. He would stand tall and straight only moving his outstretched arms to navigate the track. It’s still sad to me how his pro career was stricken with injuries. I’ll always see him standing up on the pegs around sweepers on rough outdoor tracks with #67 on the side plates. When Racer X does the top 30 amateurs of all-time he'll be near the top. He was the fastest man that ever lived on dozens of days during his best years on a motorcycle. He's still fast, too. Ask Ricky Carmichael.

Speak of the devil. One of the most entertaining, if not funny racers to watch for me will always be RC. Obviously he had a prolific career, and one thing he never shed from his arsenal was the will to pin it all the way, at all costs. One year at Loretta’s on 60’s he jumped, and crashed, in the ten commandments almost every single lap. He would cart big, get up and pass 10 or 12 riders, then go down again—casing the last set of doubles. Film caught a lot of RC’s pro follies from his no-footed can can to endo over the bars at Millville in ‘98, to the loop out at Pontiac in ‘02 all the way to that flying one-handed handstand at Washougal in ‘06. He is also the best goon rider I’ve ever seen. Carmichael has always been a funny guy and he loves to laugh. There was his serious side, of course.

He pulled off something I’ll never forget, coincidentally at the Hangtown National in 2002. The old design had a slightly off-camber 90 degree left that lead into the finish line and they had watered it heavily before the moto. Beforehand, it had been dry and really chopped out with a silty, blown out berm on the outside, which almost every rider used on their opening lap. Except the guy with the holeshot. Oh no, the leader centered his line directly at the apex on the inside and never shut off the throttle the entire way around. It was so wet, slick and potholed that you would literally fall down in tennis shoes. He just shifted gears around it in a controlled slide, wide open. If you were buffing a car and switched the pad to a Dunlop, you could not make a more perfect swirl mark than the GOAT did with his rear tire. He didn’t need a tear-off until he caught lappers two circuits later. I just stood at the fence line and belly laughed. Never losing a title defense, two perfect seasons, and actually lapping second place at a National all occurred in between the comedy. It seems like all of that happened so fast, and it has already been over half a decade since he retired. 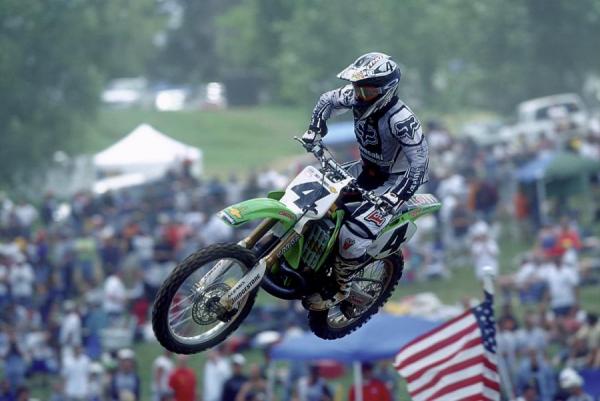 "One of the most entertaining, if not funny racers to watch for me will always be RC," Andy Bowyer on watching the GOAT.
Simon Cudby photo

It’s fun to sit back and think about other fast guys I was able to race with and watch over the years. Robbie Skaggs, J.D. Collins, Jason Partridge, Shaun Perolio, Billy Akers, Ryan Clark, Jake Martin, Brad Woolsey, Jeff Hedden, and the Stone brothers. Huge battles for plastic trophies with all those guys. Racing was one thing, but some of the best parts of motocross to me was watching the older guys. Old names like Jack Ricks, Mike Stahlman, Brent Peterson, Ben Heibel, Tim Hodes, Jason Shultz, and Willy Bowden. Fast guys from Kansas, Missouri and primarily Texas that most have never heard of. There was also Jeff Emig, Chad Pederson, and Denny Stephenson around at my local tracks getting into battles that warrior poets would envy. I remember staring at them from a few campers away and watching them hangout. Denny was always so cool and would pick the sand burs out of my shoelaces.

The common denominator in all of these memories is they were under the sun on an outdoor track. Thinking about the outdoor nationals beginning in a week gets the wheels turning in a good way. It’s summertime and the season to be out in the elements. There are two of the most stacked classes we’ve ever seen, and a new set of memories lay in wait. It’s going to be a good scene with all the pro guys shinning in their splendor while dozens of kids will be meeting their own “Hurricane” for the first time in person.

Thanks for reading. Happy Mother's Day weekend. Hangtown next week.