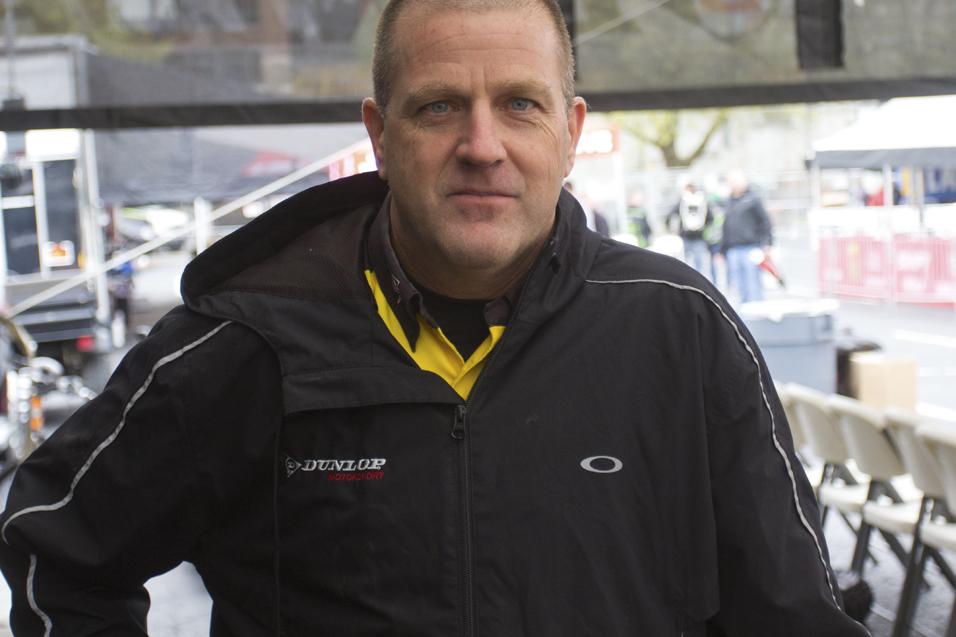 Advertisement | Advertise with Us
The athletes of Monster Energy Supercross and Lucas Oil Motocross may come from all over the world but one thing that just about all of them have in common is Dunlop rubber. The overwhelming majority of bikes in the pits at any supercross or motocross race are all shod with Dunlops, and just about all of them rely on the expertise of the seasoned crew of Dunlop tire technicians that can be observed changing hundreds of tires for the pros on any given weekend. We got in touch with team leader Brian Fleck to see how the supercross season went for his crew, and what they’ll be dealing with this summer.

Racer X: How’d the supercross season go for you guys?
Brian Fleck: It was really good. It’s the fourth consecutive year that we’ve swept every podium in the championship. It was one of our better years, for sure.

We only had one mud race this year. Does that make things easier for the tire guys?
Sometimes mud races are easier because you know what the conditions are. But this year at Seattle, it rained on Friday and we really didn’t know what to expect until they uncovered the track. It was a mixture of soft and hard-pack because they rolled the track pretty firm when they built it. You’d almost want to have just a mud race, because you know what you’re getting and the conditions are consistent. I’m sure that’s not what other people want, but for us it’s nice to know whether it’s going to be dry or wet. When it’s in between it’s really hard for us and we have to take some chances. We made a bunch of changes in Seattle as the practice sessions went on.

Yeah, the conditions were ever-changing in Seattle.
Yeah, in the afternoon the track didn’t really rut up too much, but in the night show it really rutted up bad. Earlier in the day it didn’t look like it was going to do that, so the conditions were definitely changing. Several guys changed tires before the mains, just because of the ruts.

Most of the guys in the pits are on Dunlops, but they aren’t all using the same model. How do some of the different riding styles affect tire choice?
It affects the front tire more than anything. Some guys want the front to not have much bite, like Davi Millsaps. He doesn’t like an aggressive front tire, even when it’s a little soft. He complains of having too much grip, or if it’s too grabby in the ruts. Other guys want it as aggressive as possible, like Ryan Villopoto. He runs an aggressive front tire even when it’s dry and hard, like it was in Las Vegas. The front tire is definitely more rider preference than the rear. In the rear there’s probably three or four models that everyone chooses from. Some of it depends on the balance of the chassis too. Some bikes have a little more weight toward the front and need a tire with a little stiffer construction, and some guys just put a lot of weight on the front. 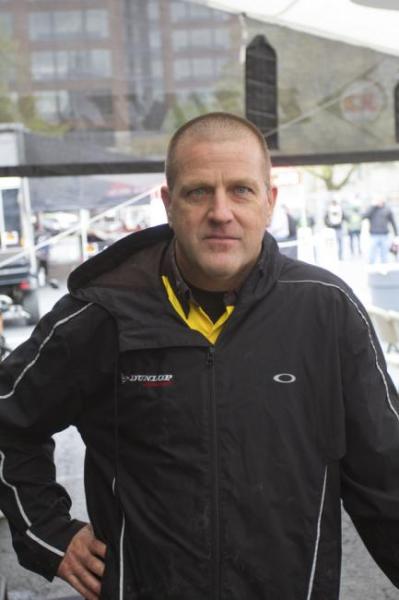 Were there any particularly peculiar tire choices that any of the guys made this season?
Not really, it was pretty much what we expected. Villopoto was kind of a surprise, because he runs a tire that we have a preproduction version of, it’s called an MX32, which is our soft terrain tire. He started using it at Daytona. We tested with him at his house right before Daytona and he liked it. Then he ran it at Indy, and he’s pretty much had it on the rest of the year. Even at Las Vegas, where it was pretty dry, he ran it. Normally you’d say it’s too aggressive of a tire, but he likes the way it feels and he makes it work. He tends to run more aggressive tires, even on hard-pack. Other guys would not run that, they’d run an MX51 or an MX71 front tire.

We’ve got a pair of new venues coming up this summer, and we’ll have two different races next year in supercross. How do you prepare for the unknown in these situations?
A lot of times we’ll go test prior to the event. Of course in supercross you can’t do that, but outdoors, like last year at Elsinore, we were lucky that Racer X had their ride day and we were able to do some testing that day. We tried some stuff with the guys on that ride day before the season even started. We may end up doing the same thing at Miller. We’re talking to some of the teams right now. I know Chad Reed rode there before Salt Lake City and he tried a couple things for us. We normally have someone that goes out and rides them ahead of time so we’ll know if we have a good base to start with. We want to know what to suggest to the guys to start with, then we can go from there.

We try to look ahead quite a ways. In September and October I actually put my orders in with the factory in Japan so we’d have stuff for A1. We have to look a long ways out. Last week we were actually testing supercross tires for 2014. Even though the 2013 season was practically over, we were testing stuff to get a head start on next year. It’s an ongoing process for sure.

How much different is the testing process between motocross and supercross?
The biggest thing for outdoors is that we run the solid mousse tubes. It’s mainly getting the riders and suspension guys used to how the mousse handles. It’s a little bit heavier than a tube, and it’s a little bit better feeling; it’s not as springy or lively as an inner tube. It takes several weeks of riding with the solid foam tubes to get used to them and to get the bike set up around it. But the tire choices aren’t that different between motocross and supercross.

The biggest difference is the workload. There’s more riders outdoors, especially with the teams putting all their 250 guys in, whereas in supercross they’re separated into two coasts.

Is it frustrating trying to get a guy the right setup when he isn’t quite sure what he wants?
You try to relate their style on a bike to somebody else’s. It’s mainly just a lot of experience between me and my entire staff. The teams will say the same thing; getting good feedback from a rider takes time. The fastest rider in the world isn’t necessarily the best test rider in the world. It takes some communication, and learning to know what it actually means when they say something. It takes time to learn that. An example this year is Zach Bell, who just moved up. He doesn’t have a lot of comments on tire performance, so we just have to try something based on what we’ve used with other riders. If we wait for him to tell us, he’s probably just going to say he’s fine. But a lot of the time we think we see something better, or we’ve found something better earlier in the day with someone else. Then we’ll have him throw it on in the last qualifying session just to have him try it, even though he didn’t have any complaints before. He’s just riding the bike, and we’re just trying to learn and work with him. We have stuff, and we can help, we just have to get the info and communicate. It’s just a learning experience, and the longer you work with a rider, the more he’ll give you.

Is durability more of a factor in motocross?
Yes, especially at a place like Steel City, which we don’t have this year. But in the past the second moto at Steel City was traditionally very hard and blue-grooved. A 35 to 38-minute race with a mousse is a challenge there for sure, to get the tire to last that long and have a soft enough compound to give the riders the grip they’re looking for. Depending on conditions, the second motos at High Point can be very hard-pack as well.

In supercross durability is an issue based on how the whoops are. The whoops put such force on the knobs, especially if they’re hard and get cupped out. It puts a lot of force on the side knobs and we see those starting to tear sometimes. You’ve seen pictures I’m sure of where the rim is almost hitting the ground, where the tire is bottomed out all the way in the whoops. There’s a lot of force on the tire at that point! The knobs bend and bend and give, and you’ll eventually start seeing some tearing and pulling. Outdoors we don’t have whoops, but the tires run a lot hotter. The speeds are higher and we’re running that foam tube.

In the past I’ve asked you which Nationals are the hardest to find the write setup and the answer always seems to be Unadilla and Washougal. So what’s the easiest?
Southwick. I love Southwick because rain or shine we’re going to run the same tire. If every track were like Southwick my job would be a lot easier for sure!