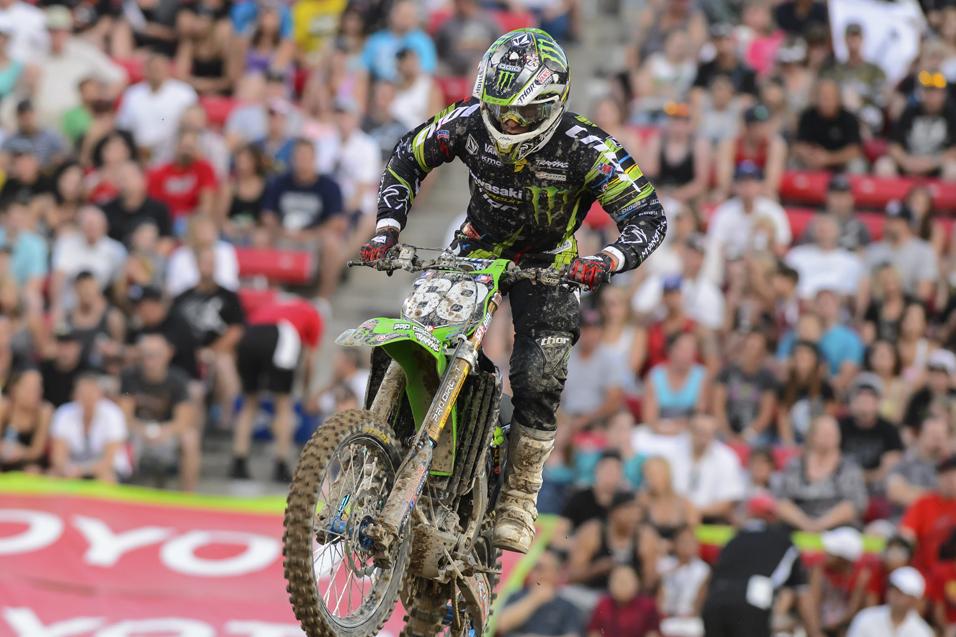 Advertisement | Advertise with Us
Las Vegas, NV Las Vegas Monster Energy AMA Supercross Championship
Well, turns out Monster Energy/Pro Circuit Kawasaki was a factor in both championships. Just not the way they wanted to be.

It’s pretty amazing how similar both the 250SX East and West Regional Championships turned out, with the title contenders racing through the pack in each main event, and a Kawasaki rider holding the lead—and the ultimate points that would unlock the title. In the East, Tyler Bowers held tough against a furious charge from Marvin Musquin, using his experience with victories in Amsoil Arenacross to put in a measured effort down the stretch. For sure, the final lap of that race showed two distinctly different scenarios between Musquin and Bowers. Musquin let it all hang out in a win-or-crash style charge, knowing second place was essentially worthless in the title fight. Meanwhile, Bowers was going for his long-awaited first career supercross win. He didn’t want to throw it away, and he knew just how much ground he had to work with. On the final lap, Bowers played it safe while Musquin poured it on. Bowers won by just a bike length, and that was enough to hand the title to Wil Hahn. 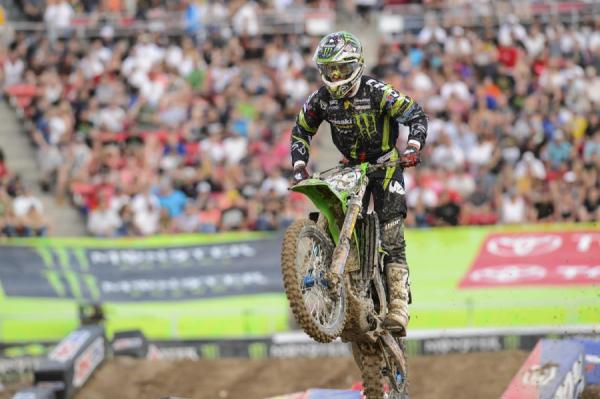 The same exact thing was playing out in 250 West, as Monster Energy/Pro Circuit Kawaski rider Martin Davalos took the early lead while title contenders Ken Roczen and Eli Tomac were further back. In the East, Musquin admitted the muddy track led him to ride conservatively early, and that’s what put him so far back. In the West, it just looked like Tomac couldn’t find his rhythm early. In the second half of the race, though, Tomac found it, and he started setting the fastest laps of any 250 rider all night long. Trouble was, like, Bowers, Davalos had already built a massive lead.

The entire season would boil down to this: could Tomac and Roczen catch Davalos? Indeed, they did. Davlos’ five-second lead would not hold up, as Tomac’s incredible pace down the stretch quickly gobbled up that gap. Once Tomac had the lead, it was up to Roczen to get Davalos as well, and once again it was a KTM all over a Kawasaki down the stretch. The difference? Roczen got to Davalos’ wheel with two laps to go, where Musquin only got to Bowers on the final lap. Bowers choose to be conservative in the final rhythm lane, doubling instead of tripling, and Musquin nearly passed him. Davalos simply bobbled, doubling as well, and Roczen leaped past him to take the spot. For Roczen, it was enough to win the title with a lap to spare. For Musquin, he came up a lap short. Incredible that the entire year ended up being decided by such small margins.