Queensland-based Motorex KTM title favourite Todd Waters won his third straight round of the 2013 Monster Energy MX Nationals at Wonthaggi in Victoria on Sunday, maintaining his perfect record of overall victories since returning to the Austrian brand ahead of this season.

The 22-year-old, who finished second in last year’s series, has stretched a commanding 44-point lead in the series following three of 10 rounds, his overall at today’s most recent round coming via a dominant 1-1 moto finish aboard the Factory Edition 450 SX-F despite qualifying third.

“It was a great day today, we’re getting there, getting the job done,” said Waters. “I’ve got a goal ahead of me and I want to reach that.”

“I’d like to thank the guys at Motorex KTM and everyone who is making it possible. We’re building as a team and working on the bike to get it better and better and I’m doing the same myself. I’ve just got to get the thing out of the gate better and we’ll be able to keep going with it.”

Winner of the GoPro Super Pole and claiming the five points that goes with it was Matt Moss for Motul Pirelli Suzuki, before bringing home 4-3 moto results in the pair of 30-minute races. Thanks to his pole, Moss finished second overall and also boosted himself to that same position in the series behind Waters.

“It’s been a great start to the year, I didn’t think I’d be up here this early,” said Moss. “I’ve got a great team manager behind me and he just tells me to build, build, build, each week. It’s going to be hard to try to catch Todd, he’s on fire, but we’ve got to chase someone so it might as well be him. We’ll chase as hard as we can.” 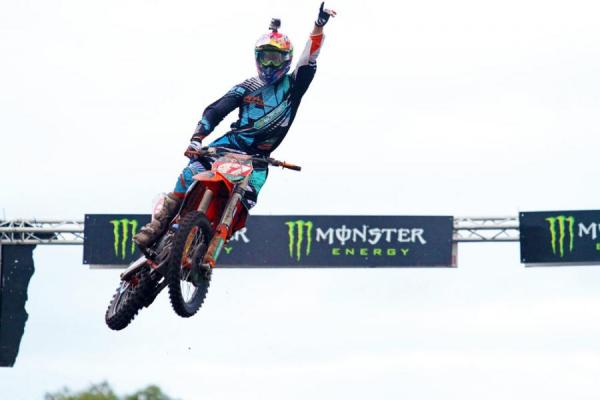 Victorian fan-favourite Adam Monea broke through for his maiden MX1 podium with third overall on the Monster Energy Kawasaki, finishing fifth in moto one despite a frustrating fall and a swift second in moto two. For Monea it was a confidence-inspiring ride that has further established him as a premier class threat.

“I knew I had some speed after getting into the Superpole, and that’s what I worked on last week,” said Monea. “I’ve got to make life easier and get some more points in, and it was a case of mission accomplished there. The first race was tough, but to back it up the second race and even lead a couple of laps was good. It was good to sit in and see some of Todd’s lines.

“This is something to build on, we’ll work on this result. I want to get on that top step and if we keep working extremely hard then before too long we’ll be up there.”

CDR Yamaha’s Lawson Bopping continued his consistent effort with fourth overall for the weekend with a scorecard of 3-4, still third in the championship standings. Bopping edged out Kiwi Cody Cooper (Motul Pirellu Suzuki), who was again far stronger in moto one with second before crossing the line eighth in moto two.

Another rookie campaigner, Kirk Gibbs (Motorex KTM), was sixth overall as he continues to build confidence, one position ahead of former MX2 rival Ford Dale (Carlton Dry Honda). Dale was another to have a mixed round after qualifying for Super Pole for the third round in a row.

Trailing Dale was teammate Daniel McCoy on the second of the factory CRF450Rs, while privateer Yamaha riders Tye Simmonds (Berry Sweet/Lucas Oil Yamaha) and Robbie Marshall rounded out the top 10.

Monster Energy Kawasaki’s four-time series champion Jay Marmont struggled to 11th overall, but did show form with sixth from back in the pack during moto two. He was ahead of former teammate Billy Mackenzie (CDR Yamaha), who also had a troublesome run in moto one before a crash in the second meant he had to settle for 12th.

Zero Seven Motorsports’ difficult run continued in the MX1 ranks with Cody Mackie transported after a crash in moto one, while Honda part-timer Cheyne Boyd suffered rib injuries in a collision with Mackenzie during moto two. Earlier in the day he surprised with sixth in moto one.

Serco Yamaha’s series leader Luke Styke won his second round of the season in the Motul MX2 ranks, winning the overall at Wonthaggi with 1-2 results aboard his YZ250F.

Styke was again in stunning form, picking up pole position and winning the opening moto with rookie teammate Luke Clout in tow. A calculated second in the final moto behind a determined Josh Cachia (Carlton Dry Honda) was enough to seal him the round win.

“All the hard work is really paying off, so a big thanks today to Serco Yamaha who are working around the clock to get us there,” said Styke. ”The bike is unbelievable, me and my teammate are riding well and we’ll be looking for consistent results like that throughout the year.

“My line choice wasn’t one-hundred percent in the second moto, Josh [Cachia] had better lines than mine today and that’s something I’ll need to work on.”

Clout also maintained his podium run, the rookie once again trailing behind Styke in formation during both motos. It was another special ride from the teenager, again going to school behind his more experienced teammate. His 2-3 finishes resulted in second overall.

“I got stuck into the same pace in that second moto, the boys are riding really good and they made it hard,” said Clout. “Second is pretty good, I’ll go back and do some homework and keep learning and hopefully come back at Broadford. 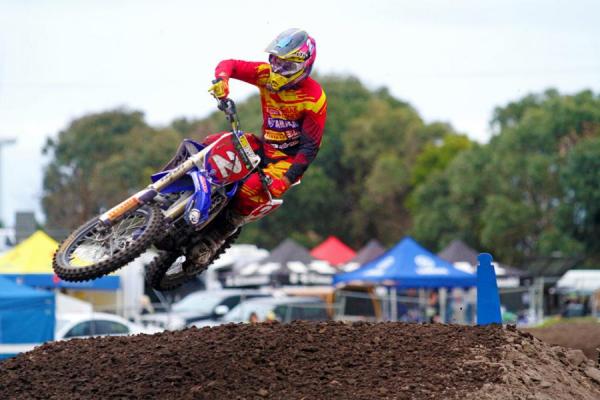 “Second to my teammate is an awesome result, and it’s really good for Serco that we’re able to put our bikes up front, one and two.”

Rounding out the podium was another rookie in KTM’s Kale Makeham, the Victorian picking up his second top three of the year. Makeham was third in moto one and fourth in the second to secure that position.

“It’s a good result and we can keep moving forward with results like these,” said Makeham. “It wasn’t easy, and I knew if I made a mistake in that race it would go to the wire. The bike is performing out of sight – it’s been great.”

In the standings it is now Styke who leads with 202 points from Clout’s 184, while Makeham is third.

Cachia was fourth overall for the round due to his moto two win, rebounding after a first turn crash in the opening moto saw him forced to settle for ninth in that one. That incident also involved Kade Mosig (Zero Seven Motorsports Kawasaki), who was transferred to hospital under the observation of Suzuki RACESAFE.

Completing the top five in another fine performance was Queenslander Broc Winston on yet another KTM two-stroke. He had a consistent round with 5-6 finishes.

Stapleton was an impressive fourth in moto one before he was involved in an early incident during the second. It was the opposite for teammate Ryan Marmont, salvaging fifth overall in the second moto to claim 12th for the weekend.

Between Stapleton and Marmont in 11th overall for the round was Suzuki privateer Wade Hunter.

In Pirelli MXD it was again rookie Victorian Jack Simpson who starred with the overall, comfortably winning moto one on his KTM two-stroke before sealing the round win with a fighting third in the second. The result sees Simpson maintain his red plate with a 12-point advantage.

“I started a bit out of balance, and had to make up a lot of positions in the first three or four corners to get into the top five,” explained Simpson.

“From there I just let it settle a bit and picked off the places one by one. It’s another good finish to the weekend and really good to be getting these points early on – consistency will win this championship.”

Kiwi flyer Hamish Harwood was again the runner-up in a continuation of round one via a pair of seconds at Wonthaggi, while third overall was moto two winner Joel Dinsdale in a breakthrough ride for GYTR Yamaha. Dinsdale was seventh earlier in the day during the first moto.