PARK CITY, KY. - After three consecutive days of rainfall in South Central Kentucky, The Rocky Mountain ATV/MC Mammoth GNCC was nothing short of a tough mudder. For the first time in recent history, Racer Productions made the decision to combine the morning amateur race with the afternoon pro race in order to salvage as much of the racecourse as possible. With nearly 400 racers-ranging from Pros all the way to Women's and C class divisions-taking part in the 1 p.m. race, it was survival of the fittest in Sunday's condensed two-hour competition.

This time it was Shenandoah Honda/USWE-Sports.com's Thad DuVall who sealed the deal after putting in a consistent and smooth race aboard his CRF250 machine. DuVall put a late pass on Rocky Mountain ATV/MC's Josh Strang to claim the overall victory in Park City, KY. After getting stuck on the last lap, Strang finished less than one minute behind DuVall to secure his first podium finish since Round 1 in Florida.

Less than 10 riders were able to complete all five laps of the race, while the top 18 riders made four laps, and the rest of the field only made three laps around the rough course. Heavy rainfall made for sloppy conditions but perhaps it was the added element of lappers that aided in making Round 5 of the 2013 AMSOIL Grand National Cross Country Series one of the toughest races in recent history. 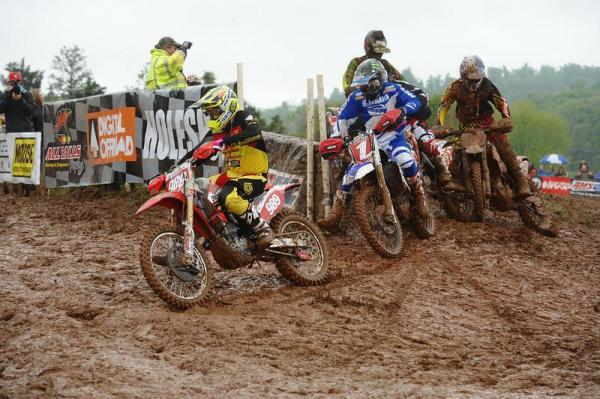 The victory was aligned from the start for DuVall, who powered his 250F through the muddy straight to claim the $250 All Balls Racing XC1 Holeshot Award. However, Strang got out to the early lead with DuVall close behind and then it was points leader Charlie Mullins, Kailub Russell and Paul Whibley inside the top five early on.

It didn't take long for defending XC2 Pro Lites champ Jason Thomas and F.A.R Husky's Andrew DeLong to physically catch the leaders, claiming the overall lead on adjusted time. Running with the XC1 front-runners early in the race allowed Thomas to set a pace that couldn't be matched by his XC2 competition, especially when his closest challengers dropped off around Lap 2. Both DeLong and Grant Baylor experienced mechanical issues due to the muddy conditions and were forced to rely on their mobile pit crews to locate and repair their machines.

Factory FMF/KTM's Kailub Russell made his way into the second place spot on Lap 2, engaging himself in a lead battle with Strang. However, Russell soon experienced a mechanical issue of his own, eventually riding back to his pit for assistance. Russell was sidelined long enough to lose several positions before heading back on the course, only to be towed in on Lap 3. 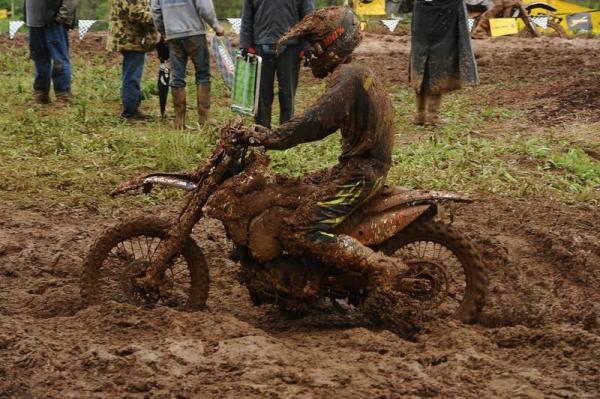 Amidst all the chaos and commotion, Strang and DuVall remained steady and consistent as the duo began putting a gap on the rest of the field. Strang led a majority of the race until Lap 4 when DuVall took over the lead after both riders stopped in the VP Racing Fuels Pro Row. From there, Strang followed DuVall on the final lap of racing but DuVall was able to break away when Strang got stuck in a deep mud section near the end.

The three-way battle for third became even more intense about halfway through the two-hour race as FMF/KTM's Charlie Mullins, AmPro Yamaha's Jordan Ashburn and Carolina KTM/RidePG.com backed Chris Bach battled back and forth. Mullins eventually made the pass on Ashburn to briefly claim the third place position, but his day quickly ended due to mechanical issues soon after. Ashburn and Bach battled down to the wire on the last lap but it was Bach who claimed the final podium position, while Ashburn took fourth overall. 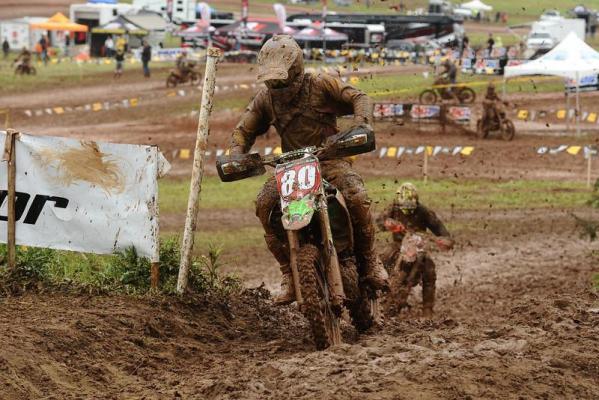 Strang led a majority of the race but DuVall never let him out of sight.
Ken Hill photo

Despite two of the top points leaders falling out of contention early on, the XC2 Pro Lites class brought several battles throughout the day, bringing a few fresh faces to the front of the pack. Factory Beta rider Justin Sode grabbed the $100 DigitalOffroad.com XC2 Holeshot Award and despite a few troubles early on, Sode made his way into the top five.

West Virginia native Zach Nolan capitalized on the muddy race conditions, immediately putting himself into podium contention behind DirtWise Schools/KTM-Parts.com/Maxxis rider Jason Thomas. Nolan slowly closed the gap on the leader Thomas and by the final lap, Nolan stuck the pass on Thomas, going on to claim his first ever XC2 Pro Lites victory and fifth overall for the day. Thomas finished a close second in the class and sixth overall, while Sode claimed his first podium finish of the season, also grabbing eighth overall. 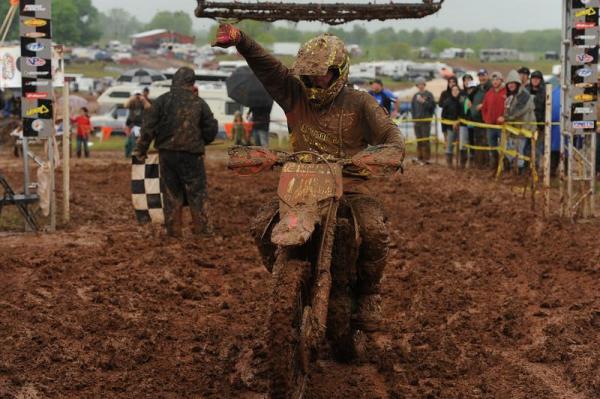 AmPro Yamaha's Paul Whibley put in a consistent ride to claim fifth in the XC1 class and seventh place overall, gaining valuable points in the championship standings. XC1 rookie Adam Bonneur finished a season best sixth place in the class and ninth overall for the day. Mullins rounded out the top ten overall, salvaging championship points despite not being able to complete all five laps of the race. However, Russell wasn't quite as fortunate, leaving Round 5 without scoring any points toward the overall National Championship.

As part of the condensed format for Sunday's race, the Women's class also took off at 1 p.m., along with the pros and top amateurs. RPM/KTM Team Maxxis rider Kacy Martinez secured her first win of the season in the Women's class, taking over the points lead from Factory FMF/KTM's Maria Forsberg. AmPro Yamaha's Becca Sheets put in a consistent ride to take second place behind Martinez and Obermeyer Yamaha/Raines Riding University/Offroadviking.com's Rachel Gutish rounded out the Women's Class podium. Forsberg ran into a mechanical issue that kept her from completing more than one lap of the race, ultimately finishing fifth in the class. 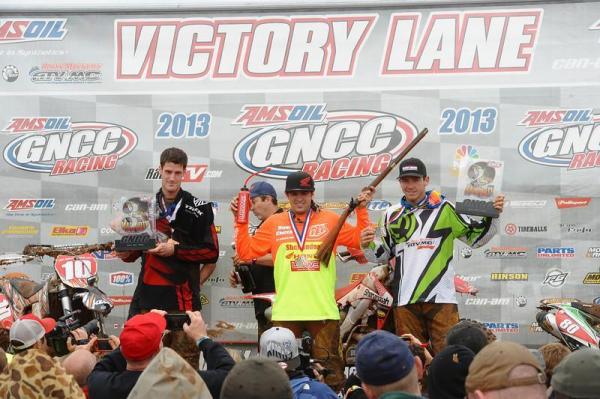 The 2013 AMSOIL Grand National Cross Country Series continues May 18 and 19 with the Dunlop Limestone 100 GNCC. For more information on the series, visit www.gnccracing.com. 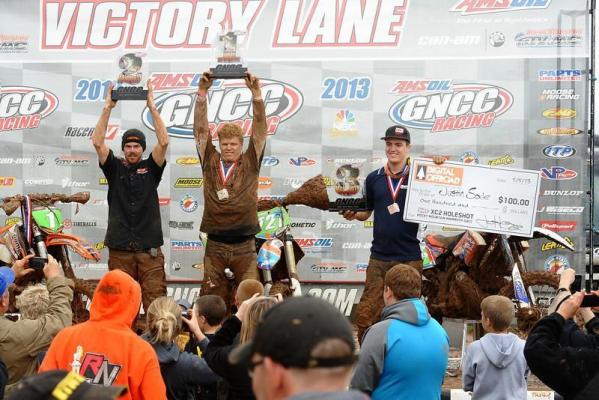