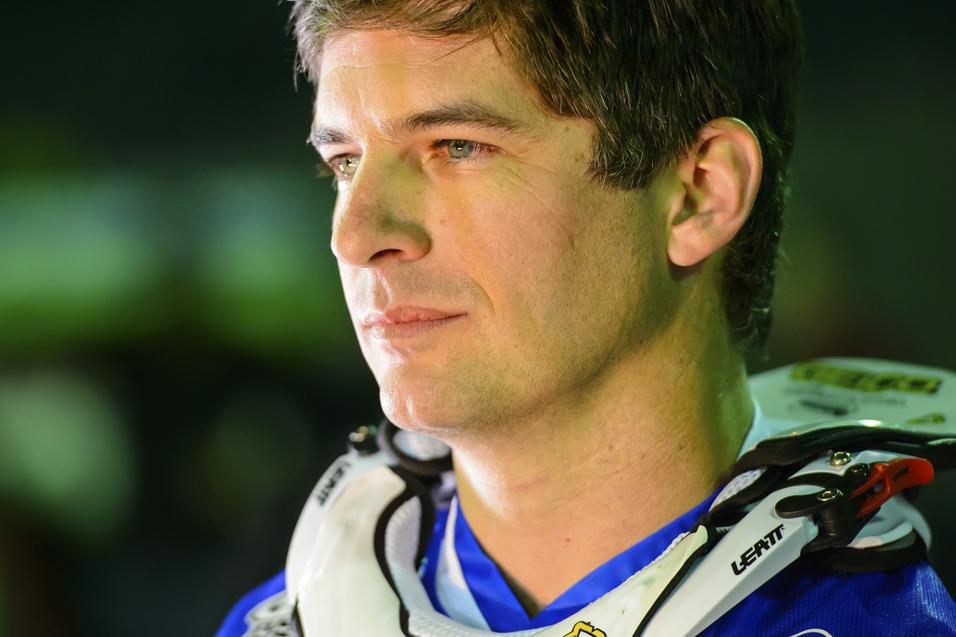 Monster Energy Supercross is just about to be in the rear view mirror. But while the 450SX title might be wrapped early, it was still a darned good season. One last time, let’s run through the moments that made it so—and boy, some of this stuff felt like it happened years ago, doesn’t it?

Millsaps and Canard Shock ‘em: With past champions like Villopoto, Dungey, Stewart and Reed in the field, there was no shortage of contenders at the opening round. So it was shocking that none of those riders led laps, the race instead boiling down to a rejuvenated Davi Millsaps and back-from-nearly-career-ending-injury Trey Canard. Who predicted this? No one. Seriously, we even talked to Millsaps several times during the off-season and he never let on about how fast he was going. And for most of the main, rookie Justin Barcia circulated in third place. This was one of the most surprising openers ever!

Stewart Tears ACL: Not all the news from A1 was good, though. James Stewart’s SX debut for Yoshimura Suzuki started with great practice times, but ended with a tweaked knee. He salvaged some points, but later announce he had torn his ACL. Scratch JS7 from title contention. 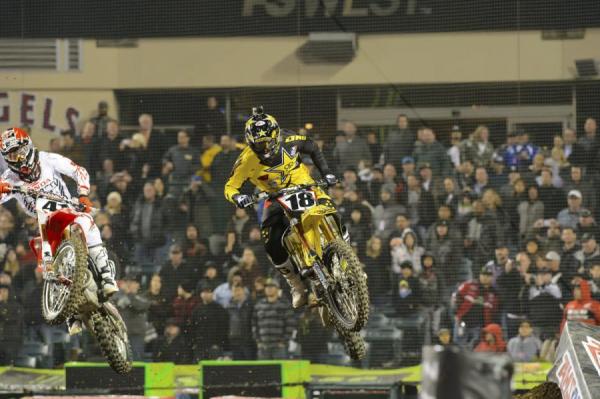 Canard (41) and Millsaps (18) were the surprise of the opener.
Simon Cudby photo

Barcia Wins Immediately: By just the second race of the season, Barcia already had a win. And his Honda Muscle Milk teammate Canard was one lap away from leading the points after Phoenix. Time for a Red Rider takeover?

Windham Calls it Quits: In a post-race interview at Anaheim 1 with our Steve Matthes, Kevin Windham hints that he’s riding with fear an considering retirement. Two weeks later, in the same stadium, he’d officially call it a career. Cool thing is K-Dub stuck around for opening ceremonies and TV work at every round—and let’s hope he never goes away completely.

Oh RV, Where Art Thou?: Ups and downs (literally) for the two-time defending SX Champion Ryan Villopoto early. Combined with Chad Reed’s early-season struggles (and his typical straightforward explanation that he didn’t like his new air forks) and the air fork became the story of the early season. 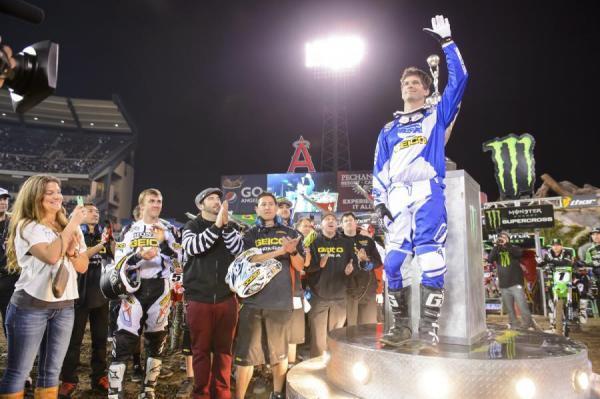 Shocking: Not like the air shock didn’t get some headlines. Red Bull KTM was trying one on Dungey’s bike, and when a seal broke on the starting line of an Anaheim heat race, it led to him barely even qualifying for the main event. An hour later, he had his first main event win of the season!

Reed and the Crashes: Reed was consistent early, and was ready to pounce when he had good starts. Unfortunately, he ended up on the ground in turn two, two weeks in a row, igniting big pileups. Soon, the Aussie vet was out of title contention, as well.

Millsaps is Legit: Reed almost got him before crashing, but Davi Millsaps proved his A1 success was no fluke by winning San Diego. Now the field had a serious problem, because Davi had confidence, speed, and an ever-larger points lead. 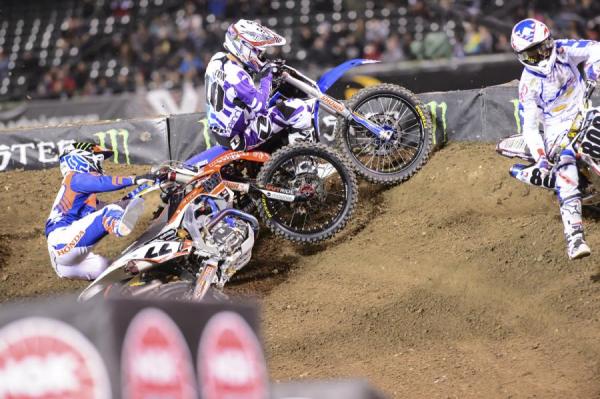 Short’s Cycle: Follow the bouncing ball of Andrew Short’s dynamic season. Started the year on a works Honda for L&Mc Racing, that team folds, he moves to L&M Racing with a production Honda, that team folds, then he moves to BTOSports.com KTM (which, thankfully, isn’t going anywhere). Combine Short’s troubles with the announcement that JDR KTM was ready to close doors, and there seemed to be a dark cloud hanging over the pits.

Stew Climbs Back: Slowly but surely, Stewart got his game back together, and in Atlanta he ran a perfect 20 laps to hold off Villopoto and win his first race of the year. Sign of things to come? Not quite.

Red Flag Gate at St. Louis: Oh, the Internet nearly blew up on this one. Villopoto runs a masterful race to slice through the contenders and win in St. Louis, but it wasn’t without controversy, as a series of red-flags, restarts, mid-race penalties and non-penalties ignited an opinion in everyone. But there was no arguing that the champ was on the comeback trail, and when Millsaps tweaked his knee a few days after the race, the door was open for RV to reclaim the points lead. 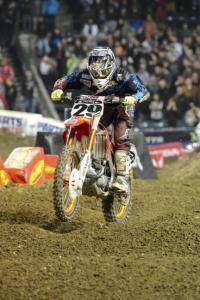 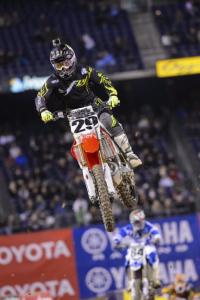 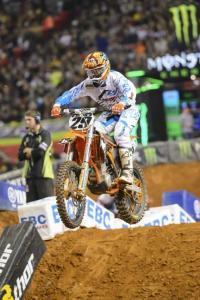 The many looks for Andrew Short in 2013.
Simon Cudby photo

I Tried, Eh: Millsaps gave one last swing for the fences in Toronto, where he holeshot and led Villopoto for half of the main. Davi wasn’t going to let RV walk away with the red plate without a fight, but eventually the champ busted through. From there, not much could stop him.

Hill Returns From the Depths: Still some feel-good stories left, like Josh Hill returning from career hell to find some of his old speed, and even win a heat race in Minneapolis. It would have been the biggest story of the night, except….

Dungey Wins in Minny: Wow! Dungey gets one shot in front of his home state fans and makes the most of it, besting Villopoto in a spectacular duel and sending 49,000 people home happy.

RV Seals the Three-Peat: Dungey and Millsaps would ultimately come up short in their title bids, but not from lack of effort. They gave everything they had to stop Villopoto in Salt Lake City, but the champ did what he does—step up in the big moments—to win the race and clinch the crown. At the end of the race, all three were fairly well exhausted from pushing so hard. It was very much the theme of the whole season. 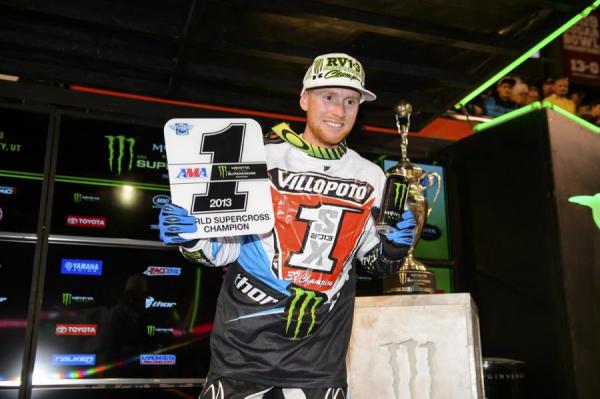