The 22-year-old North Queenslander was again in superb form as the series’ red plate holder, claiming the GoPro Super Pole award this morning and the all-important five points that go with it.

From there Waters was just as impressive in the early stages of moto one, before a crash and a later engine stall forced him to settle for a fight for third in the moto. Moto two was all Waters though, winning his third moto of the season and stretching his series lead to 19 points over Billy Mackenzie.

“The Super Pole was the decider today, so I’m thankful I was able to get that,” said Waters. “The first moto was interesting, I made a few mistakes, maybe got a bit cocky, which brought me back down and got me realising I needed to ride my own race.

“I’ve got to give it to Mossy [Jake Moss] and [Billy] Mackenzie, it’s going to be great to be battling them for the next eight rounds.” 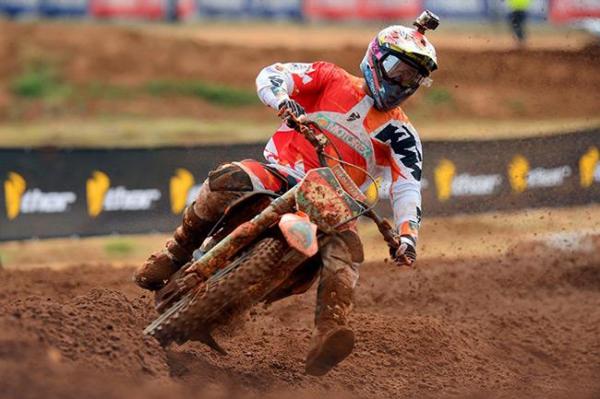 Todd Waters on his way to a second consecutive round victory for Motorex KTM.
Image: Jeff Crow/Sport the Library

“It’s frustrating not getting the wins, I missed out on the Super Pole which decided it,” said Mackenzie. “I feel like we’re doing the hard work during the week and the bike is really good, but I’m just a little bit tight on race day.

“It’s good to be back on the podium, I don’t think I was up here at all last year so it just good to have two nice solid rounds and a good points base to build from. There’s room for improvement, if I can get some more good starts and build on that then maybe I can be out front and put in the solid laps.”

Completing the podium was Jake Moss, the Campbell Mining Suzuki satellite rider winning moto one in impressive fashion, but an off-track excursion early in moto two saw him forced to work his way through the field to ninth. Moss’ result saw him climb to fourth in the standings.

“I was really feeling good those last few laps in the second moto, I wish it went for another 10 or 15 minutes!” said Moss. “It’s a big step forward, and a step in the right direction.

“I’ll go out there next weekend and try to put it on top. The first round really wrecked my start to the series so I’m glad to have turned it around. My starts have been perfect – pretty much four from four – I love the Suzuki and the Pirellis are hooking up really good.”

Mackenzie’s teammate Lawson Bopping was fourth overall with 6-3 results, displaying strong form despite having to work his way through the pack. Bopping’s consistent effort sees him now sitting third in the standings behind Waters and Mackenzie.

Fifth overall for the weekend was Matt Moss for Motul Pirelli Suzuki, finishing fourth in moto one and seventh in the second. Tye Simmonds (Berry Sweet/Lucas Oil Yamaha) was sixth overall with a pair of eighth place finishes.

One of the rides of the weekend was had by Honda privateer Jacob Wright in moto two, slicing his way to fifth ahead of a number of factory contenders in a standout performance. Combined with his 12th in moto one he was awarded seventh overall.

New Zealand champion Cody Cooper struggled to eighth overall for Motul Pirelli Suzuki. He was third in moto one, but faded during the second in a puzzling ride, eventually crossing the line 16th.

Carlton Dry Honda Racing’s Ford Dale was ninth despite crashing in the first turn of both motos, fighting back to ninth in moto one and 12th in the second. Returnee Cody Mackie (Troy Lee Designs/Maxima/Zero Seven Motorsports Kawasaki) was 10th overall after taking that same result in both motos.

Dale’s teammate Daniel McCoy was a solid seventh in moto one after losing out to Bopping late in the race, however moto two wasn’t so successful. He was 14th, ending up 11th overall. McCoy was one position ahead of fellow Honda campaigner and part-timer Cheyne Boyd in 12th.

Kirk Gibbs was another to crash in the first turn of moto one, resulting in a 20th-place finish, but he rebounded with the holeshot in moto two and was able to finish fourth. That handed him 13th for the weekend. 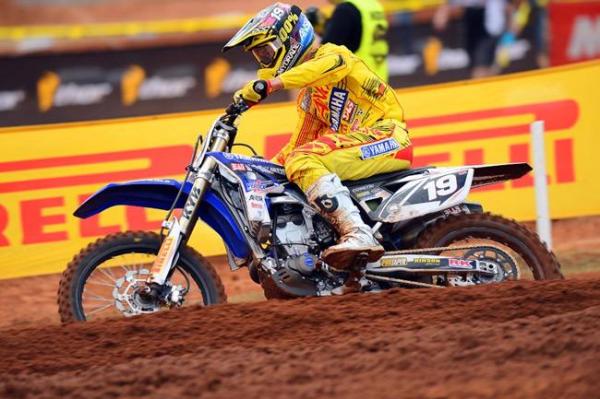 Luke Clout on the way to his first-ever moto win in the MX2 class.
Image: Jeff Crow/Sport the Library

Monster Energy Kawasaki teammates Jay Marmont and Adam Monea were both non-finishers of moto one after they came together on lap one, with Marmont suffering a severe lower back/upper leg strain. Monea was sixth in moto two, Marmont circulating to 13th.

Rookie sensation Luke Clout starred in the MX2 ranks, racing to his first ever moto win to open the day, before a calculated second in moto two sealed him the overall.

“It’s definitely rewarding to win this overall, I’ve been training my butt off with Dan Reardon and putting in a big effort for this year,” the 18-year-old commented from the podium.

“I really learnt a lot at Raymond Terrace, so I’m happy to put it into place here and I feel like top three in the championship is where I belong. I didn’t really come in expecting to win, but I guess now I’ve got one under my belt I’ll be expected to win more [laughs].”

Second for the round was Clout’s teammate Luke Styke in a Serco Yamaha 1-2, the series red plate holder salvaging third in moto one after a first lap crash. He bounced back to win the second outing, now holding down a 13-point lead in the series over Clout.

Completing the podium was an inspired performance from KTM two-stroke privateer Brock Winston, the Queenslander benefiting from his second in moto one before backing that result up with sixth in the second.

Victorian KTM rookie Kale Makeham continued his form with fourth overall due to 4-5 finishes, maintaining third in the title chase. The top five overall was completed by the ever-consistent Ryan Marmont (Raceline Pirelli Suzuki) after he took home a scorecard of 5-7.

Carlton Dry Honda Racing’s Josh Cachia had to settle for 16th overall after he suffered a DNF with a flat tyre that came off the rim in moto one. Third in the final moto marked his only points of the round.

It was also a disastrous round for Kade Mosig, the Troy Lee Designs/Maxima/Zero Seven Motorsports Kawasaki rider suffering a DNF in moto one and then forced to fight from the rear in moto two to claim 11th. He was a lowly 19th overall.

The MXD category for Under 19s contenders sat out the South Australian stop of the 2013 series.

Instead, the Rookies completed the two-wheel program at Murray Bridge, with Yamaha rising star Nathan Crawford dominating the proceedings with a 1-1 effort. He claimed the overall victory for the round from Zak Small and Connor Tierney.

The MX1, MX2 and MXD series will resume with round three of 10 at Wonthaggi in Victoria next weekend on Sunday, 5 May.