With the win, the FMF/KTM rider now holds a 20-point lead in the series standings over factory Husaberg’s Russell Bobbitt, while AirGroup Racing’s Nick Fahringer maintains a solid third another two points back.

Two straight days of rain left the Westpoint riding area extremely saturated, leaving the tight and twisty trail soft and extremely slippery. Having won under similar conditions two weeks before in Louisiana, Mullins twisted back the throttle on his 350 XC-F and took control of the race from the get-go, winning the opening test of the day by 19 seconds over FAR Husqvarna’s Andrew DeLong.

After getting off to a slow start in test one, Fahringer flexed his muscles in test two, claiming the first of his two test wins on the day, however Mullins still maintained the overall lead and would do so for the remainder of the race. 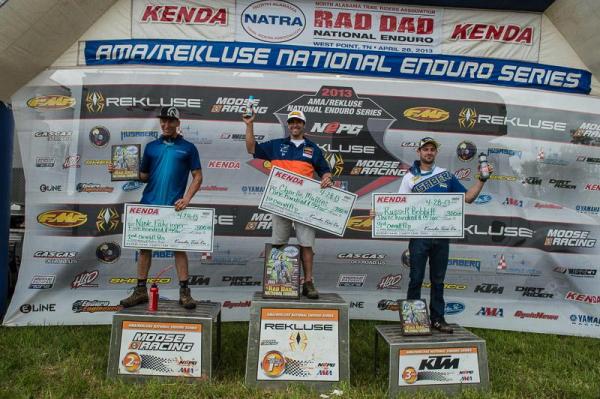 Fahringer won again in the third test, which kept him within striking distance of Mullins for the time being. Meanwhile, Bobbitt was the only other rider besides Mullins and Fahringer to win a test, and did so in the fourth test, beating out Mullins by 12 seconds.

In the end, Mullins took the overall victory by a minute and 23 seconds over Fahringer, with Bobbitt rounding out the podium another 42 seconds back.

“It was good to get another win,” said Mullins. “It was slick out there, but it wasn’t as bad as I thought it would be after all the rain we got.”

A tough time in test four cost DeLong valuable time and the Pennsylvania rider finished out the day in fourth, while eight-time national champ Mike Lafferty rounded out the top five on his factory Husaberg.

The Rekluse AMA National Enduro Series takes a six-week break before returning to action on June 9 in Marquette, Michigan for the Loose Moose National Enduro. For more information on the series go to www.nationalenduro.com.