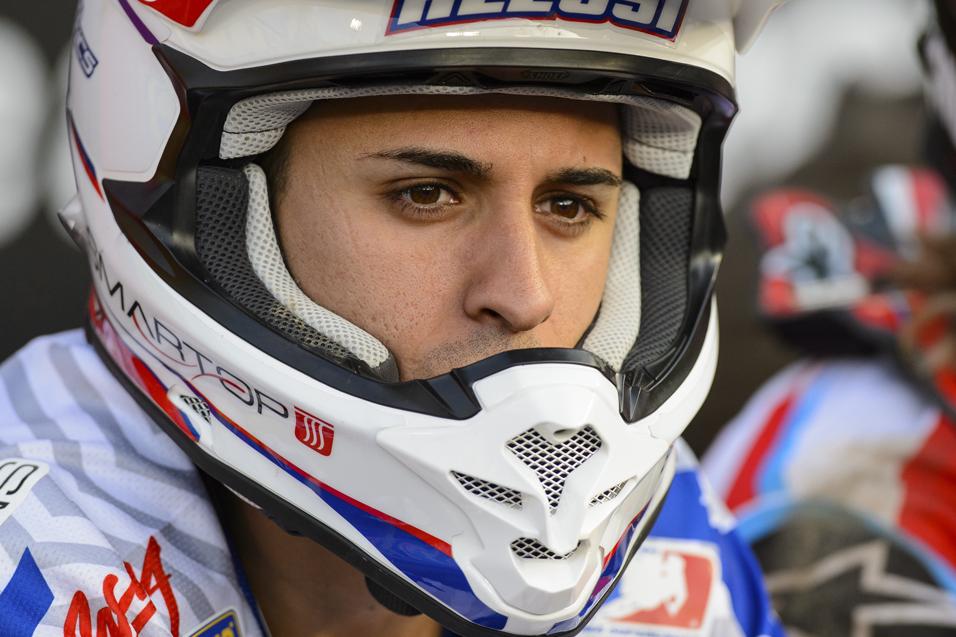 Jason Thomas (Raced a lot both indoors and out)

Per a MotoConcepts Racing press release today, Mike Alessi will sit out the two remaining supercross rounds to instead focus on the upcoming Lucas Oil Pro Motocross Championship. Apparently they have discovered new technology over at the Smartop MCR team that will require additional testing time before being ready for Hangtown.

No news yet on what the new technology is but the Alessi camp is known to press the envelope when it comes to giving Mike the best chance to win. Whether it be a hovercraft or a time machine.

Tony Alessi is sure to be excited about having new options to debut in a month’s time. In the team press release he stated, “It’s a unique situation whereby we have new technology for the 450 that requires a great deal of attention and testing time to develop.” This literally leaves anything possible. It will be interesting to see what the MCR machine shows up with on May 18, but personally I am hoping for a jet turbine.

As far as whether this is a good move or not, who is to say? For MCR, this has to be a wash. Certainly 2013 hasn’t been what they had envisioned up to this point but having said that, outdoors is clearly where they put their hopes. If I wasn’t a known waffler, I would venture to say that it is a smart move. It does take time to get up to full speed outdoors after eight months of supercross devotion and two more weeks of prep time is a huge bonus. While the rest of the field is flying to Salt Lake City or Las Vegas, racing supercross and attending awards banquets, Mikey800 will be out pounding motos in the high desert sand. He’s played this game before. In 2011, Mike was poised to come out firing in the Nationals until a massive crash while leading timed qualifying left him sidelined until mid-season. With the competition at an all time high, can we see this same level from the Apple Valley ace? Time will tell but this move will certainly build the hype when it comes to outdoors. I, for one, am a believer.

With the news of Mike Alessi pulling out of the last two supercrosses to focus on the outdoors, I have a few different rapid reactions to the deal: My first one is, A) Is Mike Genova, the owner of his team okay with this? And then depending on his reaction B), That’s cool.

Mike’s supercross season hasn’t gone that well despite his impressive ride this past weekend in Seattle. Alessi’s DNF’d four rounds with crashes and sits outside the top ten. As good as his last season was (and I thought it was very good) let’s face it, Mike’s had a tough go of it this year. And then there’s the fact that last season Mike was very good in the nationals. Actually he’s always been good in the Nationals. So if Mike and pops Tony feel like they need these extra two weeks to get ready for supercross, well go on, then.

I imagine that owner Mike Genova was okay with this decision and signed off on it so that team 800 can come out at Hangtown swinging.

A lot hinges on these summers Nationals for Mike and his dad. With a full field of racers it’s not going to be easy for the team to do as well as they did last summer but maybe this break will allow them time to get some more testing in and get the fitness up. So yeah, good decision for Mike.

I’m never a fan of riders skipping races, because I believe the more riders and stars at each event, the better. But, I’ll agree with the strategy here in Mike Alessi’s case. His SX season has been pretty bad, and I’ve been following it closely because I said in the pre-season that he would surprise people with a solid showing indoors. Alas, it hasn’t really come together.

On the other hand, we have seen a lot of riders take advantage of extra outdoor prep time. Go back to the spectacular pro rookie debuts of Justin Barcia and Eli Tomac, who were motoing down for months while the competition was focused on supercross. Eventually, the competition caught back up. Another forgotten example is Ricky Dietrich, who was killing it for a few rounds on an MX-only deal in 2011 but was soon swallowed up by the pack. Even Alessi can point to an example. He was spectacular in his debut on the KTM 350 at Hangtown in 2010, a season where he didn’t even race supercross. He wasn’t the same rider after that one, and for that matter, neither was the rider who won the overall at Hangtown that day, Chad Reed, who also put his full focus on moto instead of supercross that year.

The point is, we’ve seen plenty of examples of riders skipping some SX and coming out firing at the National opener. The advantage usually fades as the pack gets up to speed, but Team Alessi will take every advantage they can get.