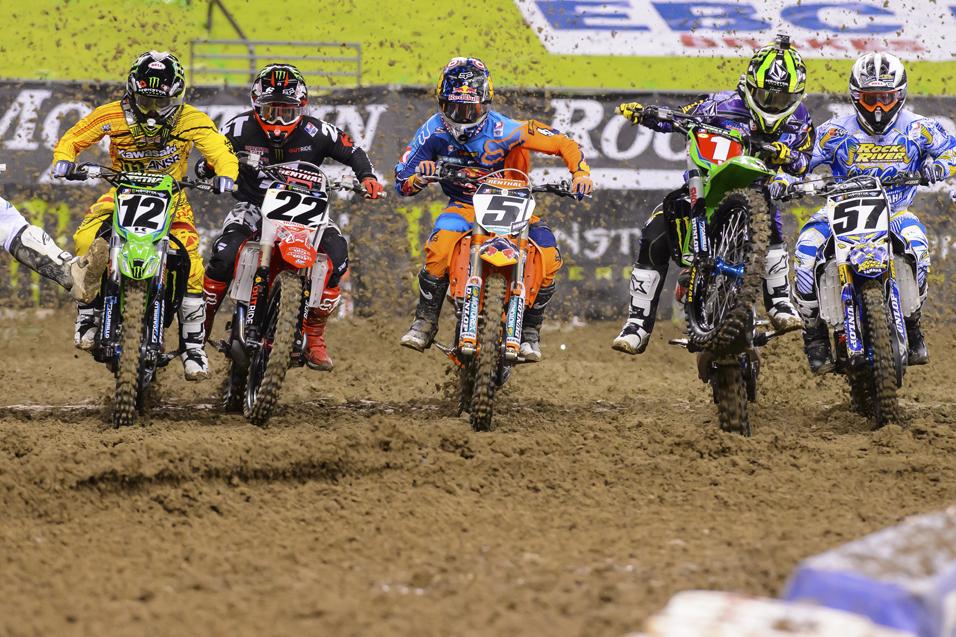 - Justin Barcia led start to finish in Seattle securing his second career 450SX victory in just his fifteenth start. But the 450SX rookie would not take home fastest lap of the night honors, nor would runner-up Ryan Villopoto. That crown belonged to Davi Millsaps, as the Rockstar Energy Racing backed rider set a 55.762 on lap four. Millsaps finished third.

- Consistency was key in Seattle’s treacherous conditions. Series points leader Villopoto and Barcia were the only two riders with only one lap over the one minute mark—and both were set on the final lap, with the race basically in hand.

- Barcia was consistent all race, but used an early spark—setting his first eight laps under 57 seconds—to put some space between himself and Villopoto.

- FOURTEEN: Numbers of riders with an average lap time over one minute, the most since Daytona.

- Phil Nicoletti, who secured his first career 450SX top ten in Seattle, was the only rider that finished inside the top ten to set every lap over one minute.

- Things looked promising for Trey Canard early in Seattle, as he set his first eleven laps under 59 seconds, but things quickly turned for the worse as Canard stalled, then crashed, eventually leading to a DNF.

- It’s no secret that Jake Weimer has been struggling since returning from a mid-season rib injury. But the Monster Energy Kawasaki rider was strong late in Seattle, stringing together his best stint during laps 12-18, during which he set all of his laps under one minute. His top-five finish was his best since round three.

- While his championship hopes took a major turn for the worse in the first turn in Seattle, Ryan Dungey was able to salvage a fourth, thanks in part to a great run during laps 6-12 in which he set all of his laps under 58 seconds. Keep in mind that he was marching through traffic during this charge.

Nothing is ever easy when you’re trying to run away from two-time defending 450SX champion Ryan Villopoto. And as you’ll see, RV made things tough on the rookie early. Let’s examine the lap charts a little closer.

Once again, we see how close the top riders in Monster Energy Supercross are these days. While Barcia jumped out to an early lead in the sloppy Seattle terrain, the hometown hero, Villopoto, was actually a tick faster than the rookie. But it was darned close, as even on a track that bred mistakes, they matched average times down to the same tenth of a second. Down the stretch Barcia showed the composure that garnered him two 250SX East Region titles, and was able to hold RV at bay, en route to the win. 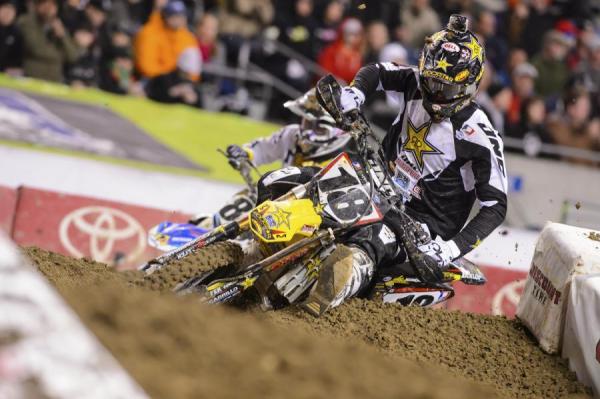 - In the blink of an eye, what would have been a fourteen-point deficit quickly turned into a twenty-point hole for Eli Tomac. The GEICO Honda rider didn’t miss a beat all night long until the rutty Seattle surface jumped up and grabbed him. Tomac was fast early, which led to his lead, setting his first eight laps under 58 seconds, including the fastest 250SX lap of the night with a 56.149.

- Eventually winner Ken Roczen joined Tomac as the only riders in 250SX to set laps under 57 seconds.

- Zach Osborne struggled early in the season with a shoulder injury, but the big break proved to benefit the veteran, as he garnered his first podium of the season and shared the latest fastest lap set with Cole Seely.

- Also benefiting from the break was Seely, who is returning from major injuries suffered nearly a year ago. Seely was strong down the stretch as he had to work back from a bad start. He set his last seven laps under 58 seconds.

- Austin Politelli was also strong down the home stretch, putting together his best string of laps during laps 8-13, where he set every lap under the one-minute mark. 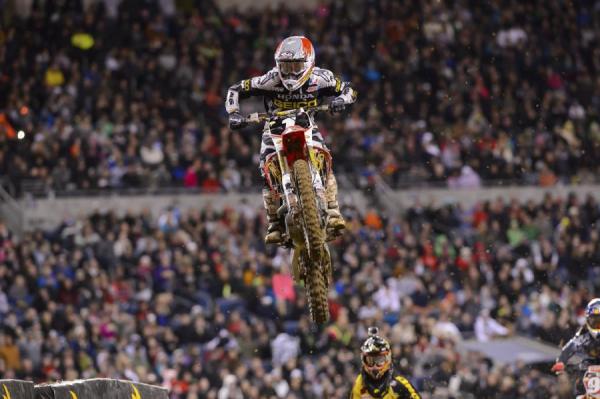