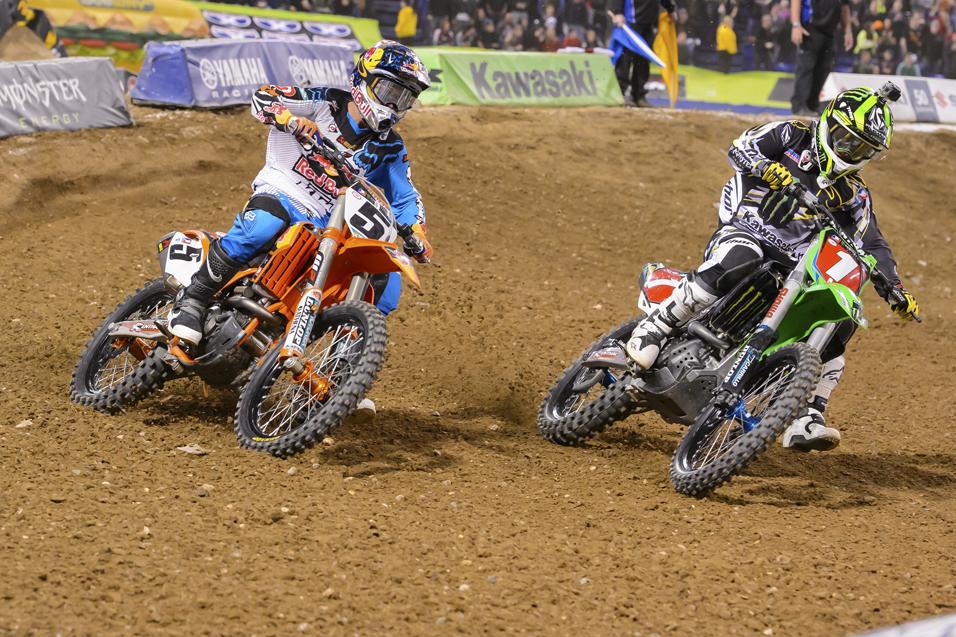 - Davi Millsaps rode to a lonesome third place finish, but he wasn’t too far off the pace of the Ryans, setting his first thirteen laps under 51 seconds. This speaks to the volume of how fast and hard the leaders are pushing early, and also, how long they’re able to maintain that torrid pace.

- James Stewart laid down seven straight laps under 52 seconds before pulling off with an apparent wrist injury.

- The Ryans weren’t the only ones laying down impressive lap times, as 450SX rookie Justin Barcia joined the duo as the only three riders to not have a single lap over 53 seconds.

- A little more than two weeks removed from knee surgery, Chad Reed looked smooth in his return. Reed only had two laps over 53 seconds—the second and last lap.

A battle of the titans took place in Minneapolis on Saturday night, in a final farewell to a packed house at the Metrodome. Let’s look at the lap charts between the Ryans for deeper analysis.

This was a pure chess match between two of the prime athletes in the sport. You might not find a race where two riders were more closely matched. For example, Villopoto would edge Dungey during the first nine laps, averaging a 50.109, with Dungey averaging a 50.110. That’s only one thousandth of a difference in average lap time from laps two through ten. ONE THOUSANDTH! The second half of the race told the real story, as Dungey set faster times in eight of the final ten laps. But the racing was still bar-to-bar as Dungey’s 50.401 was just a tick faster than RV’s 50.653, but was just enough to propel Dungey to his first win since Anaheim III. 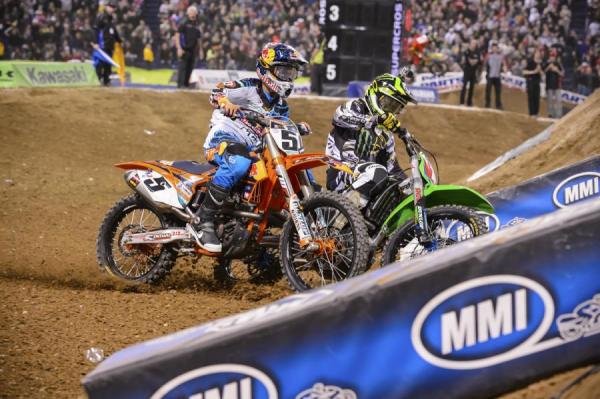 The racing was close between the Ryans on Saturday night.
Simon Cudby photo

- Marvin Musquin ran away from the field en route to his fourth win. Musquin was clicking on all cylinders early, rattling off six straight laps under 51 seconds to begin the race. The Frenchman would also set the fastest lap of the night with a 50.262.

- Musquin was far and away the most consistent rider on Saturday night. His average lap time of 51.644 bested all but Hahn’s, Blake Wharton’s, and Tyler Bowers’ fastest lap of the night.

- After going down in the Wharton incident, Bowers clicked off six consecutive laps under 53 seconds. But it was too little too late to catch Gavin Faith for fourth.

- Lance Vincent had a career night in Minneapolis with a career best finish of sixth. He set his fastest lap of 52.871 on lap 3—the only lap he dipped below 53 seconds.

- Vince Friese was charging late, setting the latest fastest lap of the night with his best time on lap ten, and four straight laps (10-13) under 53 seconds. 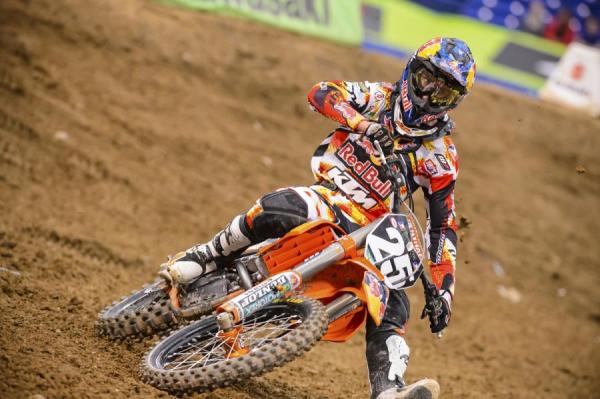