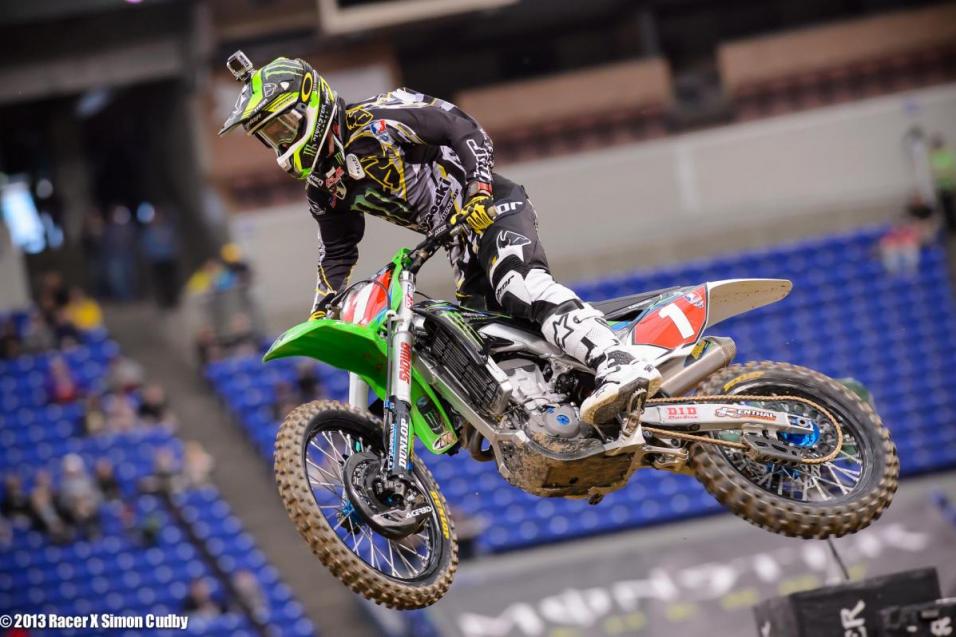 Practice is complete here at the HHH Metrodome in Minneapolis, Minnesota. The fans got what they wanted when home state favorite Ryan Dungey logged a late fast lap and took the overall best time of the day. It was four-tenths quicker than the next fastest rider, Ryan Villopoto, and nowadays four-tenths is a pretty big gap. He was also the fastest last week in Houston. So while Dungey might be known for his overall fitness and strength, lately he’s had as much sprint speed as anyone. What’s not to love? The Dunge has a real shot at a home state race win tonight.

There is a cool rhythm section here that presented a few options. The section comes after the first turn, and if riders go outside, they can triple-triple-triple through it. That appears to be a little faster than going inside and going roll-double-triple or even doubling in, but that fast line might not hold up all night. Several riders were jumping it in the first timed session, but in the second, only a handful did. It’s a hard rhythm to jump, and if you don’t get it, you’re set to lose a ton of time. Plus, it requires going outside, so you won’t be able to make a pass even if the line is quicker. The inside line, meanwhile, is much easier to do every lap.

James Stewart, Trey Canard and Justin Barcia rounded out the top five. Josh Hill, the 2008 winner here, looked strong all day and was sixth best. He’s surging here late in the season. Then Millsaps was seventh, and Ben Lamay was very strong in eighth. Yes, Ben Lamay. Perhaps the Alaska native is comfortable because it’s snowing outside? We’re kidding. But he did look good. Broc Tickle and Chad Reed rounded out the top ten.

In the 250 class, Marvin Musquin was fastest in both sessions. It’s a technical track and he excels in those conditions—and if the track gets ruttier and rougher, he’ll be even better. 250 points leader Wil Hahn looked strong early in practice but did have a crash. He’s okay, but ended up third overall. Second? Tyler Bowers. The AX champ looked smooth and fast and could be a good bet for the podium. Throw him in the mix along with Blake Wharton and the 250s might produce some real action tonight.

That’s all from here. Racing starts at 7:30 central time. Without live TV coverage tonight, the best way to follow the race is via our @racerxonline Twitter feed. See you there.