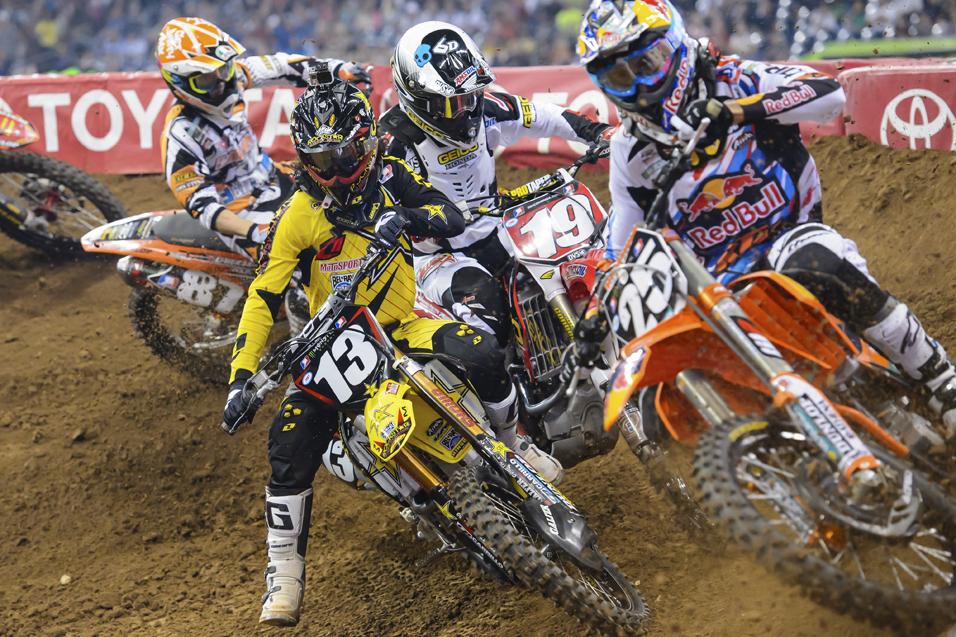 *NOTE: There was an error in James Stewart's average lap time, therefore we were unable to use it.

- Ryan Villopoto rolled to a fifth straight win in Houston. He bolted to an early lead that was helped by setting his first three laps under 52 seconds—the only rider to have more than one lap under 52 seconds. The points leader would also set the fastest lap of the night with a 51.703 on lap 2.

- Ryan Dungey came ready to match the intensity of RV, setting his first seven laps under 53 seconds, which was the best in the field.

- A crash ruined any chance James Stewart had of securing his first podium since Indy, but he was able to nudge Dungey out of the second-fastest lap spot with a 54.956, just edging RD’s 51.991—also set on lap 6.

- NINE: Number of riders that set their fastest lap in the 54s.

- Phil Nicoletti matched a career-high in Houston, and was moments away from his first career 450SX top ten—before crashing late in the race. The N-Fab/TiLUBE Yamaha backed rider set the latest fastest lap of the night with a 54.094 on lap 9.

- Trey Canard, who found the podium for the first time since A2 in Houston, was also setting a nice pace early, with his first six laps all under 54 seconds.

- Davi Millsaps was the most consistent rider of the night, setting all 20 laps under 55 seconds. The Rockstar Energy Racing man was the only rider to achieve the feat.

Ryan Dungey has been unable to stop the red-hot Ryan Villopoto, as RV rolled his streak to five straight wins, tightening his grip on the points chase. But Dungey has shown he can match RV’s intensity. Dungey’s first official lap in second came on lap eight. Once he had a clear track in front of him, Dungey actually set a faster pace than Villopoto, as you will see below.

Dungey rallied off consecutive 52s once taking control of second. RV answered with a 52 of his own on lap 10, but Dungey fired back with four straight laps in the 52s, compared to only two from Villopoto. But RV was resilient and came back strong, especially when they hit lapped traffic. He was quicker than Dungey on the following four laps (15-18), and that helped him secure his fifth straight win. 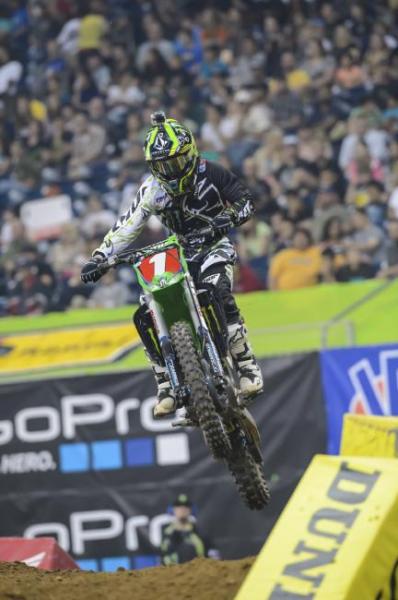 *NOTE: There was an error in Marvin Musquin's average lap time, therefore we were unable to use it.

- Blake Wharton found redemption in Houston, erasing the bad memories from a last lap blunder in Indy. The Rockstar Energy Racing rider set the fastest 250SX lap of the night with a 52.959, and was the only 250 rider to set a lap under 53 seconds.

- Points leader Wil Hahn extended his points lead over Marvin Musquin in Houston and also became the only 250 rider to set his first nine laps under 55 seconds.

- Marvin Musquin would join Wil Hahn as the only 250 riders to string together three consecutive laps under 54 seconds. Musquin’s streak came during laps 3-5, while Hahn’s came during laps 4-6.

- Mitchell Oldenburg, who has been battling an injured collarbone after a crash in Toronto, struggled in Houston—finishing 19th. But the rookie privateer did manage to set the latest fastest lap of the night with a 56.988 on lap 11.

Blake Wharton’s aggression early helped him garner the lead, but his relentlessness down the stretch led to his first 250SX win of 2013. Let’s take a closer look at the Wharton/Hahn matchup from Houston. 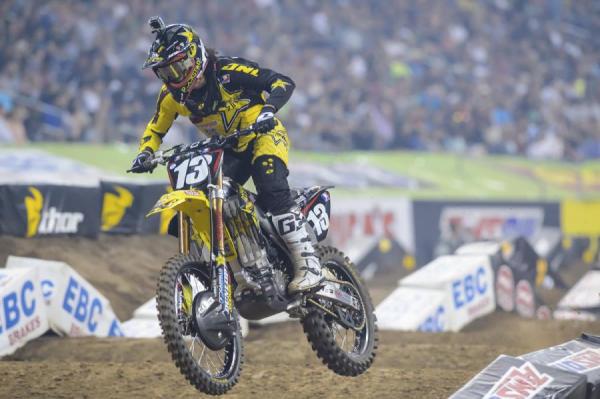