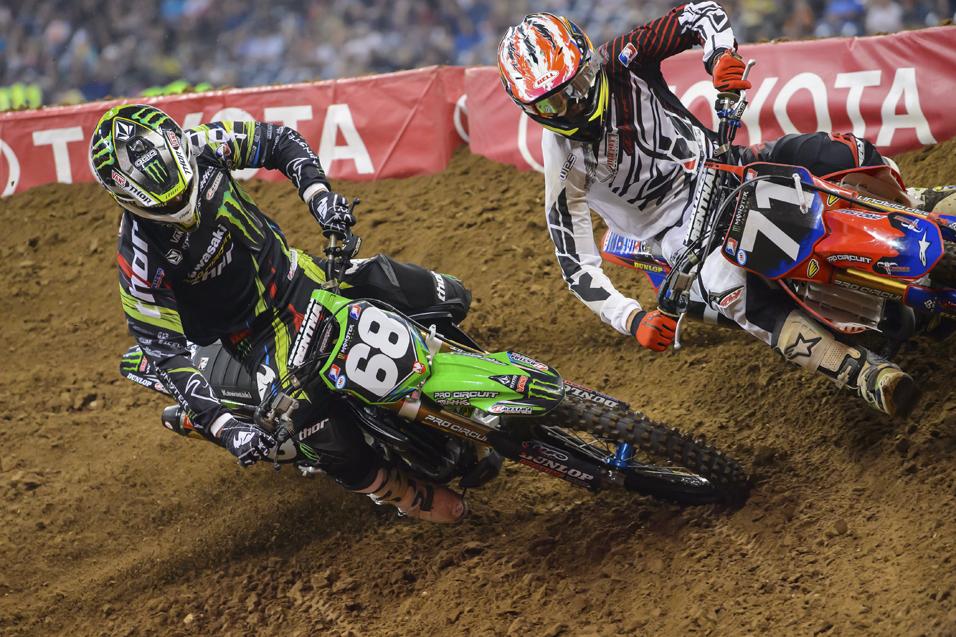 - NINE: Number of races between podiums for Honda Muscle Milk’s Trey Canard, who captured his third podium of the season in Houston with a third.

- It was a banner night for the N-Fab/TiLUBE Yamaha team in Houston. Phil Nicoletti matched a 450SX career-high with a 12th (and was running in ninth on the last lap before he crashed), while teammates Bobby Kiniry (13th) and Chris Blose (15th) both recorded season-high finishes. What led to this success? Our reporters think the excellent lunch the team served, including carne asada tacos, had an impact. Not that we had any or anything. Or that we’re biased or anything. Or that we encourage more teams to serve both lunch and dinner on race day.

- Motoconcepts Mike Alessi grabbed one of his patented holeshots in Houston, but crashed in the whoops later in race—his second crash in as many races—leading to a second straight 20th place finish. Alessi is normally pretty consistent, but this SX season has been feast or famine for him, with four 20th-place results.

- It’s been a long road back for Dodge/Sycuan/RCH Suzuki’s Josh Hill. The former factory Yamaha standout was back in form in Houston, capturing his first top ten finish since 2010, which ironically also came in Houston. 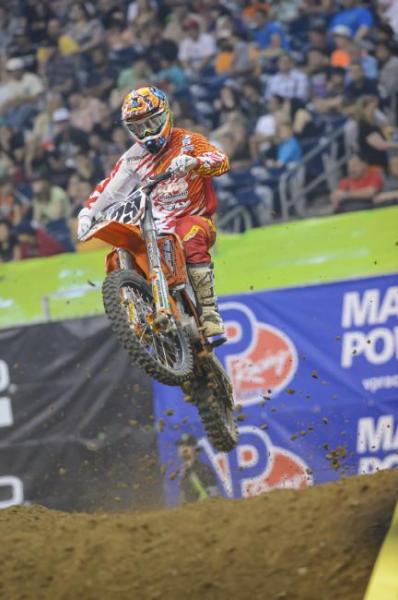 - There was a lot of buzz over in the BTOSports.com KTM pits. Literally, because there was apparently a bee’s nest right near the team’s grill, so when they began to fire up the Bubba Burgers, the bees went everywhere. Our inside source over at BTOSports.com, former team rider Jason Thomas, says the queen bee was in town, and every bee in Houston wanted to see her.

- Andrew Short sent a stinging sensation the way of the Dodge/Sycuan RCH Suzuki team, first by taking Broc Tickle down in the latest round of their on-track scuffles, and then later by passing Hill in the very last turn of the race and stealing seventh. Hill was okay with the pass, but Tickle and Short, not surprisingly, had totally different viewpoints on what went down between them.

- “Andrew Short got me again and that really irritates me,” said Tickle in a team PR. “He’s done it three or four times now. I’ve gotten him back and he just keeps doing it again. It looks like he has another one coming and I’ll make it count. He’s knocked me down twice now and I haven’t knocked him down yet.” Tickle finished the night 10th.

- “We have a difference of opinion and what not,” said Short to Racer X’s Steve Matthes post race. “I just want to move forward. I want to race. I don’t know how to say it politically correct; I’m just trying to move forward. I thought he was going to check up and he never checks up, that’s how he races. I’ve learned that. I have that problem with him and he has a problem with me, and we keep running into each other.”

- Regardless of the rough riding incident with Tickle, Short rode well, coming from a first-turn crash for seventh. Matthes uncovered a setup change in Short’s bike, as a new linkage has helped with cornering, without giving too much back around the rest of the track. They last few races, Short has been much better on the KTM than when he started. “We made a change that makes the bike turn better,” said Short. “It maybe sacrifices a little in other places. I feel like on this KTM I wasn’t able to turn as well as the Honda, and this has made a big difference.” 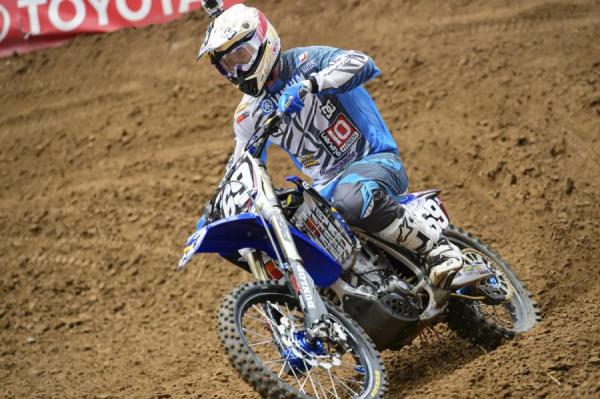 - A little less drama, but an incident nonetheless, for BTOSports.com KTM’s Matt Goerke, who was run into (or taken out, depending on your view) by Monster Energy Kawasaki’s Jake Weimer. They both went down. Weimer finished 9th, Goerke 11th.

- JGR/Toyota Yamaha’s Justin Brayton has been mired in a mid-season slump the last few weeks. The Iowa native used the week off to regroup and had his best finish since Dallas (fifth) with a sixth in Houston. After the race, Brayton commented to our Steve Matthes that he’s been putting a little too much pressure on himself to deliver for his team. He relaxed a bit for Houston and it paid off.

- By the way, the Houston whoops were huge early in practice, and Brayton looked faster than anyone through them. Not surprisingly, he said that if the whoops were that big every week, he’d be fine with that.

- It was a whirlwind week for Eleven 10 Mods Yamaha fill-in rider PJ Larsen. It was uncertain late in the week if Larsen would have a bike in Houston after some confusion about Larsen’s future plans earlier in the week. Rock River Yamaha stepped in brought down a spare frame and some other parts, while Eleven 10 flew Larsen’s mechanic and a motor and suspension to Houston. Larsen seemed unaffected as he rode to a season high seventh—his best finish since a fourth in Toronto in 2011. Larsen’s wild weekend wasn’t over as he flew back to California and competed in the MTA 2 Stroke World MX Championship at Glen Helen on Sunday.

- Although Motoconcepts’ Mike Alessi struggled for a second consecutive race, his 250SX counterpart, Gavin Faith, captured a career high fifth in Houston. It was Faith’s first career top five finish, and he earned it. After going down fighting for the holeshot in the first turn, he rounded the first lap in 16th, but climbed back through the field to finish fifth.

- Tyler Bowers was also on the move early, as he was nearly last thanks to some first-turn carnage, but quickly rode around the mess, then passed a ton of riders in the whoops, and found himself seventh by lap two! He scored a strong fourth in his debut with Monster Energy/Pro Circuit Kawasaki, a career-best for the three-time AMSOIL Arenacross Champion.

- Faith and Bowers weren’t the only ones with career highs in Houston. Canadian privateer Cole Thompson matched a 250SX career-best with a sixth, and privateer Daniel Herrlein captured his first career 250SX top ten following a ninth in Houston. 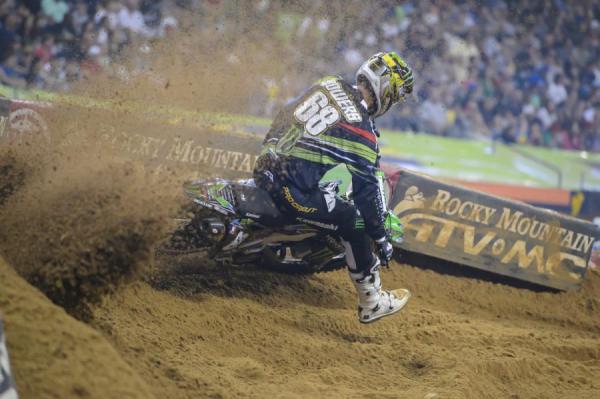 - Congrats to privateer Chad Crawford (18th) and Zack Willams (12th) on making their first career 250SX mains. Check out the upcoming June issue of Racer X Illustrated to learn more about Crawford and his 2 Dudes in a Tundra running mate Mark Weishaar in 2 Tribes.

- The state of Texas has been kind to privateers Bradley Ripple and Ryan Zimmer, as both made their first main events in Houston since the 250SX East Region season opener in Dallas. Both achieved season high (Ripple 16th, Zimmer 15th) finishes in Houston.

- Privateer Levi Kilbarger also had a season high finish in Houston—finishing just outside the top ten in 11th.

- Former Honda of Houston amateur star Vann Martin returned from a broken wrist in Houston. This marked Martin’s first career supercross. The JAB Motorsports rider would miss the main after finishing fourth in the LCQ.