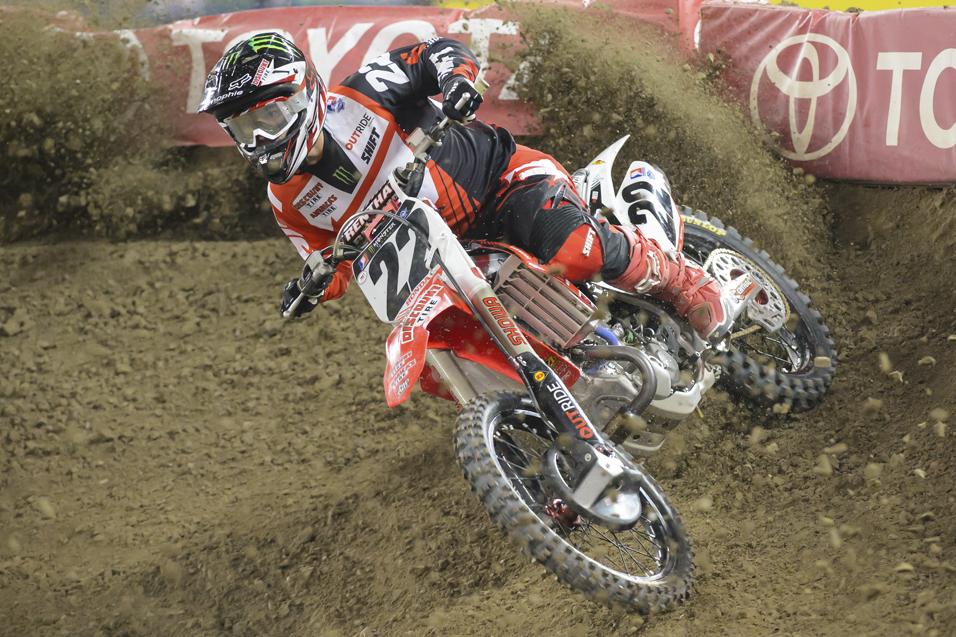 Chad Reed – Knee Injury
Comment: Reed underwent surgery to correct a problem stemming from a knee injury suffered in supercross last year. Our own Steve Matthes spent part of the week in Florida with Reed and reports that Reed is “90 percent out for Houston.”

Jimmy Albertson – Broken Wrist
Comment: Albertson crashed on the start of the LCQ in Toronto and will be out for the remainder of supercross.

Justin Hill – Fractured Radius
Comment: Hill sustained a fractured radius (forearm bone) when Gavin Faith landed on him in Toronto. Hill is week-to-week at the moment, but he won’t be racing in Houston.

Kyle Peters – Unknown
Comment: According to a press release, Peters crashed while practicing during the Easter break. The press release did not mention what he had injured, and Peters was unavailable for comment.

Mitchell Oldenburg – Broken Collarbone
Comment: Oldenburg injured himself in Toronto but rode yesterday and just tweeted that he will give it a go this weekend. 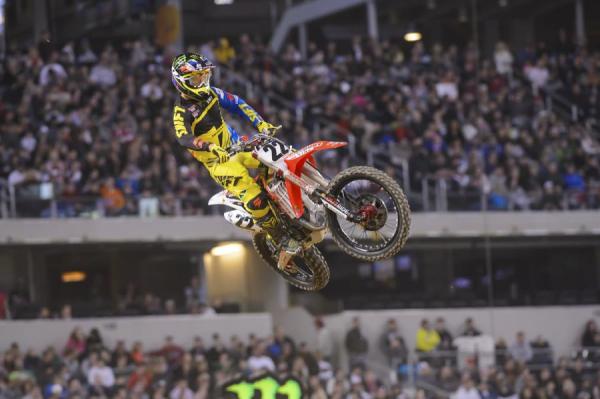 Reed is likely out for Houston after undergoing knee surgery.
Simon Cudby photo

Dean Wilson – Broken Ribs and Collapsed Lung
Comment: Wilson injured himself in a hard crash in his heat race in Indianapolis. He will miss the rest of supercross, and currently, his status for the opening round of Lucas Oil Motocross is unknown.

Trey Canard - Concussion
A big crash in the Indianapolis main event led to a hit to the head for Canard, who told us it's unlikely he will race Toronto. Besides the concussion, he escaped without injury. He missed Toronto but he’ll be back on the gate this weekend in Houston.

Ryan Sipes - Fractured Wrist
Comment: Sipes sustained a hairline fracture in his wrist at A2 during the main. He has resumed riding and was hoping to be able to race a 450 by Houston, but it didn’t work out. Sipes will be back racing in Seattle.

Brett Metcalfe - Broken Tibia and Dislocated Wrist
Comment: Metcalfe went over the bars when his bike ran out of gas in a rhythm section at Glen Helen Raceway last summer. Metcalfe is back riding and will be racing the Canadian Nationals this summer with Leading Edge Kawasaki.

Darryn Durham - Torn Achilles Tendon and Shoulder Problems
Comment: Durham has resumed riding, and it’s questionable whether or not he’ll be ready for the Lucas Oil Pro Motocross Championship opener at Hangtown. 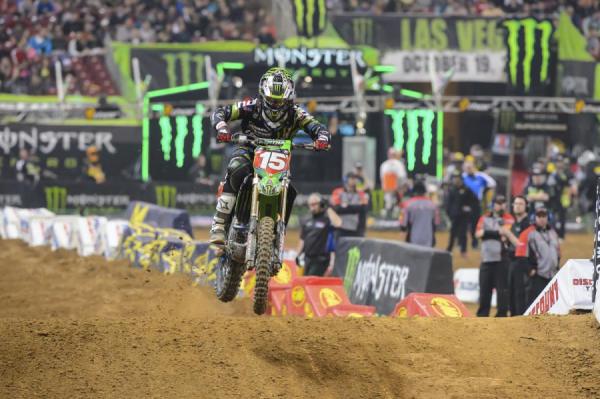 Wilson is out for the rest of supercross. His status for the Nationals in unknown at this time.
Simon Cudby photo

Justin Bogle - Broken Right Scaphoid and Dislocated Left Wrist
Comment: Bogle hoped to join the Eastern Regional 250SX ranks midway through the season, but is now shooting to be ready for the beginning of Lucas Oil Motocross in May.

Landon Powell – Broken Ribs and Bruised Lung
Comment: Powell was injured in a big practice crash following Atlanta. He plans on getting back to racing in Houston and will jumping up to a 450 in Seattle and Salt Lake City.

Tevin Tapia – Chipped Ankle Bone and Injured Knee
Comment: Tapia injured himself in Atlanta. He recently resumed riding and should be ready for the Nationals.

Alex Martin - Broken Wrist
Comment: Martin broke his wrist while training at Clubmx in December. He underwent surgery to remove the pins in his left wrist and is planning on being ready for the Nationals.

Chris Johnson – Lacerated Liver and Right Adrenal Gland Hemorrhage
Comment: The size of Johnson’s liver laceration measures 5.7 by 5.1 cm. There is no timetable on his return. 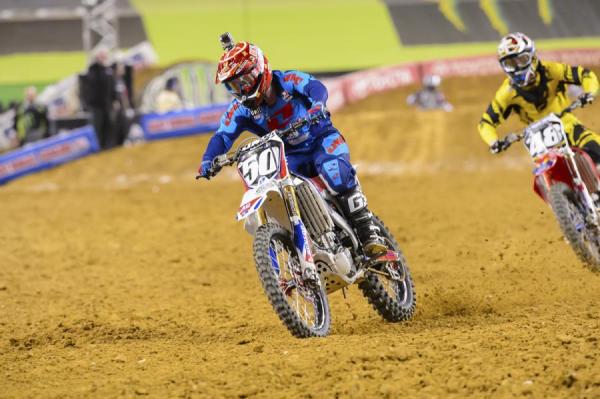 Kyle Peters is out for the rest of supercross with an undisclosed injury.
Simon Cudby photo

Joey Peters – Blood Clots in Left Lung, Two Back Fractures and Blood in Colon and Pelvis
Comment: Peters is out of action in indefinitely.

Matt Lemoine – Torn ACL
Comment: Lemoine tore his ACL in practice in Dallas and underwent surgery and won’t be back until after the Nationals.

Gannon Audette – Fractured Pelvis and Clavicle
Comment: Audette sustained a fractured pelvis and clavicle in Dallas. Audette plans to resume riding this weekend. Right now there is no timetable for his return.

Michael Leib - Broken Arm
Comment: Leib suffered a broken ulna (forearm) bone in a big crash at A2. Leib is back on the bike and is heading to race the GPs with the Dutch Suzuki factory satellite team Beursfoon.

Casey Hinson - Torn Hand Ligament
Comment: Hinson sustained a deep gash in his hand, and will undergo surgery next week. Hinson hopes to be back on the gate in Seattle.

Blake Baggett - Broken Hand and Wrist
Comment: Baggett injured his hand in a first-turn pileup at A1. Baggett has undergone surgery and will not be returning before the end of supercross. 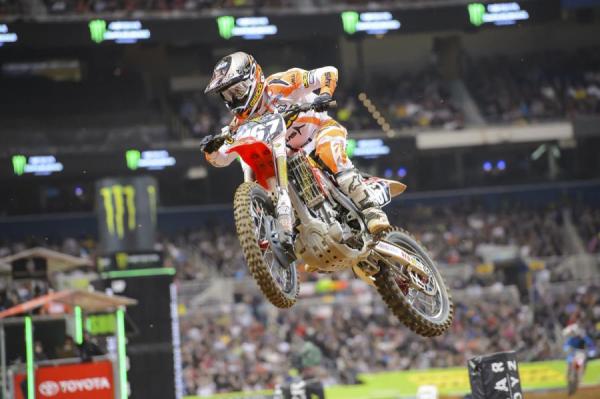 A shoulder injury will keep Zach Bell on the sidelines until Hangtown.
Simon Cudby photo

Vann Martin - Broken Wrist
Comment: Vann Martin suffered a broken wrist in December. He will be racing in Houston.

Michael Byrne - Lateral Tibial Plateau Fracture
Comment: Byrne injured himself at Unadilla. Byrne is back on the bike, but it is uncertain when he'll be able to return to racing.