Round 11 of Monster Energy Supercross is underway here in Lucas Oil Stadium. The track here in Indy is tacky early on with a short but big set of whoops presenting some challenges. The second rhythm section should provide a variety of lines, with Jeff Emig telling us earlier that he thinks riders may start to quad into the off-camber turn.

Most of the time, Indy boasts tacky dirt, but there have been some recent years where the soil dried out significantly, leading to a slippery surface. We talked to Dunlop's Broc Glover about it, and he said from what he saw during the track walk, the soil seemed tacky this time. He said it could dry out as the night goes on (and the heat is cranked up pretty high in this building) though. 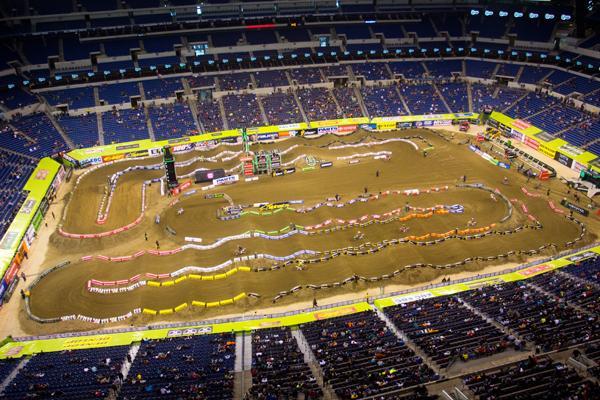 They need to crank the heat, though, because it's pretty cold outside. A few teams, like GEICO Honda, have put up their full pit skirts (with plastic windows) around their setup, trying to lock out the weather. It was nice this morning, but the sun has gone away and things have chilled this afternoon. Just another element for the teams and riders to deal with.

Indy will house a new points leader for the first time all season as Ryan Villpoto enters with the two point lead over Davi Millsaps. Millsaps admitted earlier that his knee has been causing him some problems this week, but he has been able to ride.

Pre-season 250SX East Region favorite Dean Wilson is looking to put a bad weekend in Dayton behind him, jokingly saying that he hopes his teammate Justin Hill takes the win, as long as he can gain some points.

Open practice is underway, with timed sessions beginning shortly. Remember to check out Supercross LIVE at 2 Eastern, with live coverage on Speed beginning at 7:30 Eastern.