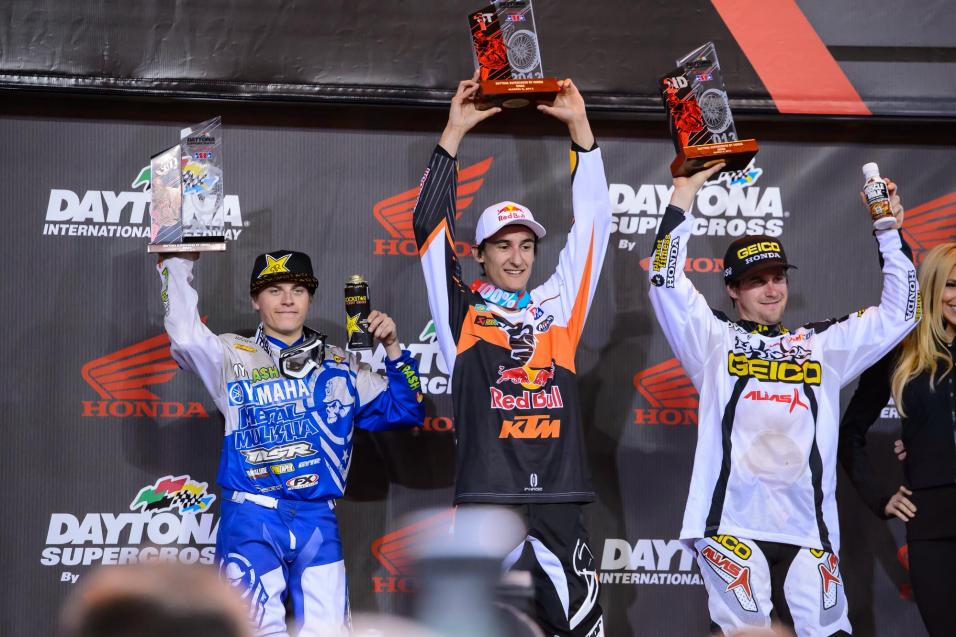 This track was just plain tough. The heat races offered up some great racing, but with the longer races in the main, there wasn’t as much action. But those heats! A KTM duo of Ken Roczen and Andrew Short was blowing minds early in one of them, battling for the lead ahead of James Stewart and Ryan Dungey. Roczen eventually wrestled the lead from Short, and he held it all the way until the last lap, when Stewart launched an attack and made the pass. In the other heat, Justin Barcia held strong under an attack from Ryan Villopoto. Seemed like anyone in that group could win the main—but when it came down to crunch time, Villopoto got the start and outlasted everyone to the finish. The 450 main was long, 28-some minutes. There wasn’t much battling left through the final laps.

Roczen was a revelation on that KTM 350 SX-F, though, nailing two starts on it and laying down some blazing laps. Eventually, arm pump got the better of him on the rough track, and the German kid was not, ahem, pumped on his performance overall. But the speed and starts where there. Too bad Roczen is one and done in the 450 SX class this year.

Roczen’s 250 SX West sparring partner Eli Tomac was pumped on his ride. It was quiet, but effective, resulting in fourth.  "I finally rode like I know how to ride and I finally felt comfortable on the bike for the first time," Tomac said. "We all kind of got sandwiched on the start and I had to fight through that. I fell into like eighth or ninth place and then just told myself to relax and let the race come to me. This time on the 450 is going really well for me. I'm learning a lot and I definitely know what it takes to ride at this level. I guess the next step is get up on the box now."

Chad Reed’s normally not all that fast (relatively) in practice—he’s way, way beyond the days of showing off with a fast lap during the day. But he couldn’t help it here, he likes Daytona and he was hauling. Fastest in the first timed session, third in the second one. Unfortunately, he was down in a pileup off the start in his heat, and he had to dig from last to fifth, all while riding without a rear fender. He didn’t have a great gate pick in the main event and had a so-so start, then crashed. He kept digging and came back from eighth to fifth. 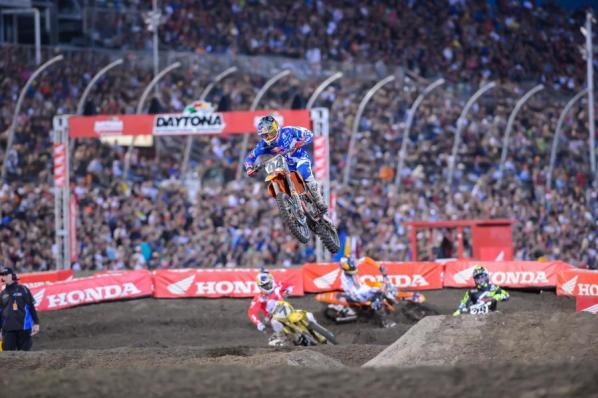 Roczen was in the thick of some battles all night long. 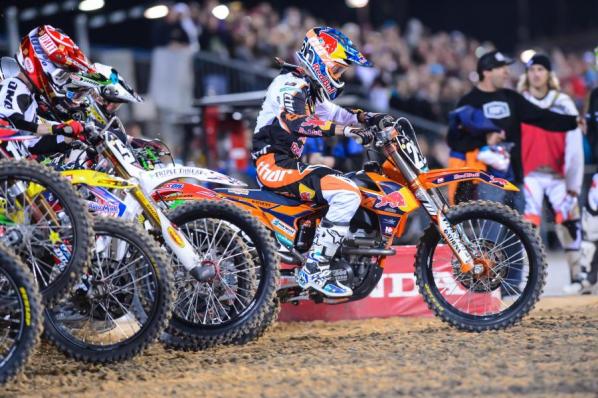 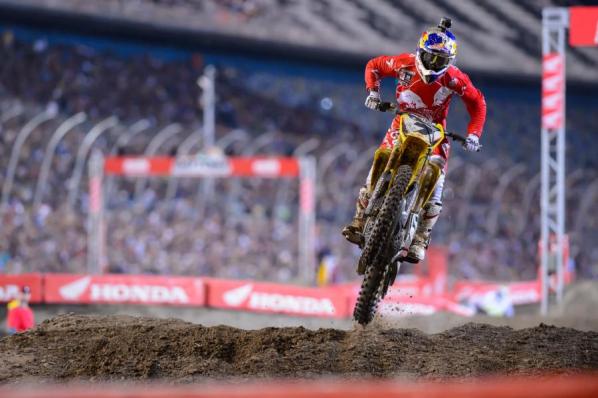 James Stewart won his heat race, but struggled with a bad bike setup in the main. A crash didnt help, either.
Simon Cudby

Davi Millsaps just didn’t seem to have the same spark that he’s had all year, and the rough Daytona track usually works well for his style. Bad starts in his heat race and main made it worse, as did an early fall in the main, but no doubt, it was the toughest night of the year for the Rockstar Energy Racing rider. He’s lost the points lead for the first time this year—it will be a true test to see how he responds.

Ryan Villopoto is now undefeated since switching to a new triple clamp offset.

Justin Barcia had four-time Daytona SX winner Jeff Stanton whipping on him for ten days leading into the event. “I’m working harder than I ever have,” says Barcia. “But this race was tough tonight. Trying to build a track to prepare for it, it’s like riding Southwick to prepare for Lommel.”

Does a Frenchman really understand the importance of winning at Daytona, home of NASCAR’s Daytona 500? Marvin Musquin says yes, he had dreams of winning this race, and doing a big burnout on the pavement. Well, half of that dream came true. He won. But he pretty much sucked at getting the burnout going. He’ll settle for the win!

Mike Alessi had a tough one, he was down with Reed early in the heat race, then came back through to get into a transfer position. Then he had another problem and ended up a lap down, sending him to the LCQ. There, he took the win, but his main event was filled with ups and downs and he struggled to 16th.

Oh, but the battle behind Alessi for the final transfer in the LCQ! Bobby Kiniry and Weston Peick had the battle of death for the last spot, passing back and forth on the last lap, then drag racing over a triple and the finish line jump side-by-side. The transponder feed gave the spot to Kiniry, but since the transponder reads at the bottom of the finish line jump, a visual override is used to determine who really had the spot at the top of the jump. That gave the spot to Peick, and Kiniry was out of the main.

Crazy, right? No, here’s the crazy spot: Peick, at first, thought he missed the cut, since the transponder gave it to Kiniry. So he was captured via the SPEED TV cameras kicking his bike to the ground in frustration. Moments later, he was in the main!

What happened to Dean Wilson? We hear he got arm pump part way through the race, and just couldn’t hang on. The 2011 250 MX Champ showed great speed in practice and his heat. But he really needed a win in the main to steal some confidence from Hahn, and it didn’t come together.