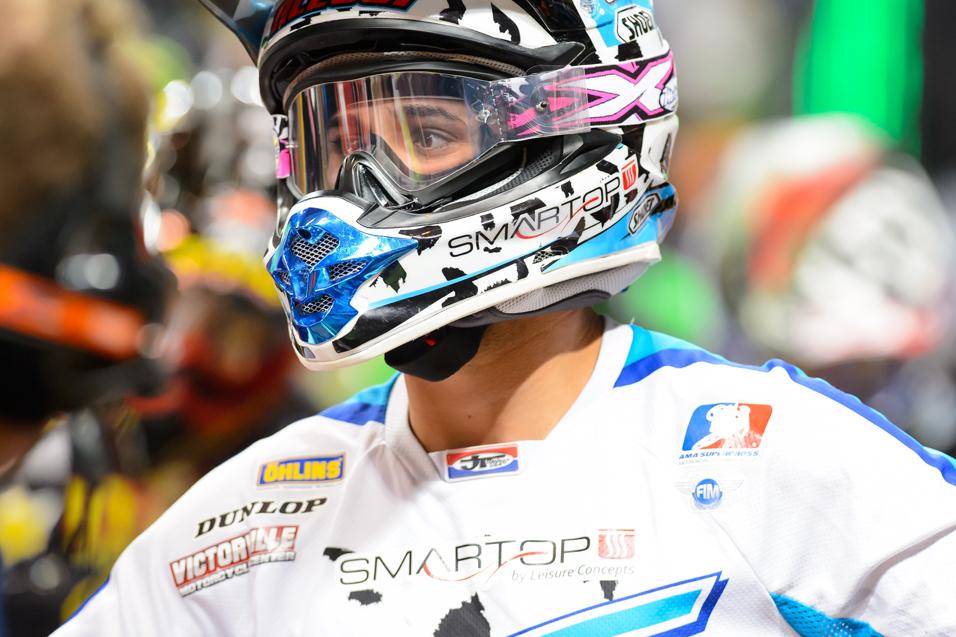 Lurking behind all of the craziness in St. Louis was the #800 Smartop MotoConcepts Suzuki of Mike Alessi. It’s been a long time since the controversial racer has gotten much mention in a supercross race, but his seventh place finish is deserving of a nod. In fact, Alessi’s name has entered conversations two weeks in a row as he has began to post some quick times and now a stellar main event finish.

Considering Alessi has become established as a motocross specialist through the years, and the depth of this year's SX field, there weren’t high expectations for Alessi coming into the supercross season. When he started off with back to back 20th place finishes, things looked pretty bleak. Since then, his signature holeshots have started to return and there have recently been some very fast factory riders looking at the back of his jersey after the checkered flag. 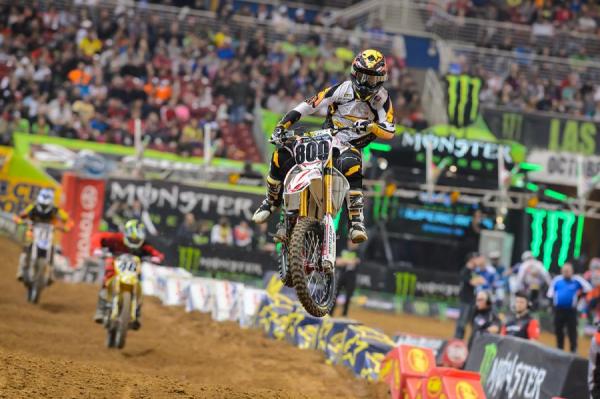 After a rough start to the season, Mike Alessi has begun to turn it around the last few weeks.
Simon Cudby photo

Alessi pulled the holeshot in the main event in St. Louis and looked ready to fight. Certainly, the whoop section was a freeway and there aren’t any technical sections separating riders with superior supercross skills. Alessi’s corners were smooth and he was riding strong. I was actually clapping for him in the press box early, but then the inevitable challenge for the lead -- from James Stewart in this case -- came his way. He and Stewart went over the wall jump side-by-side before he looked over and backed off down the straight away and blatantly let Stewart go by. The recent memory of Mike blocking and holding off Ryan Dungey for 30 minutes last summer made this move somewhat puzzling, but self-preservation against an intense pace was likely his motive. Alessi has said before that he will just ride to his level in supercross and not push beyond it, but it does make you wonder what he could do in supercross if he believed in himself a little more.

One of the biggest enigmas in the sport has been Alessi’s inability to place well in Monster Energy Supercross. You’ll be hard pressed to search through the history books to find a rider with such a handicap in the stadiums compared to his yet championship caliber speed outdoors. In addition, Alessi grew up beating Davi Millsaps and Ryan Villopoto throughout his amateur career. Quite handily and consistently at that. Perhaps watching fellow non factory Suzuki rider, Davi Millsaps lead the standings has lit a fire in him and renewed some of that old confidence? Besides letting Stewart have his way, he did fight back against the rest of the field, including a pass on Justin Barcia to reclaim second after the red flag restart. His seventh place finish in one of the most talented fields ever may be a statement that his season is beginning to turn around. With Daytona next on the tour, equipped with more of an outdoor feel than any supercross of the year, #800 may be a rider you might want to look at in your fantasy team. Who knows, it might be time for Alessi to turn the corner and showcase his talent in supercross? It was a job well done in St. Louis.