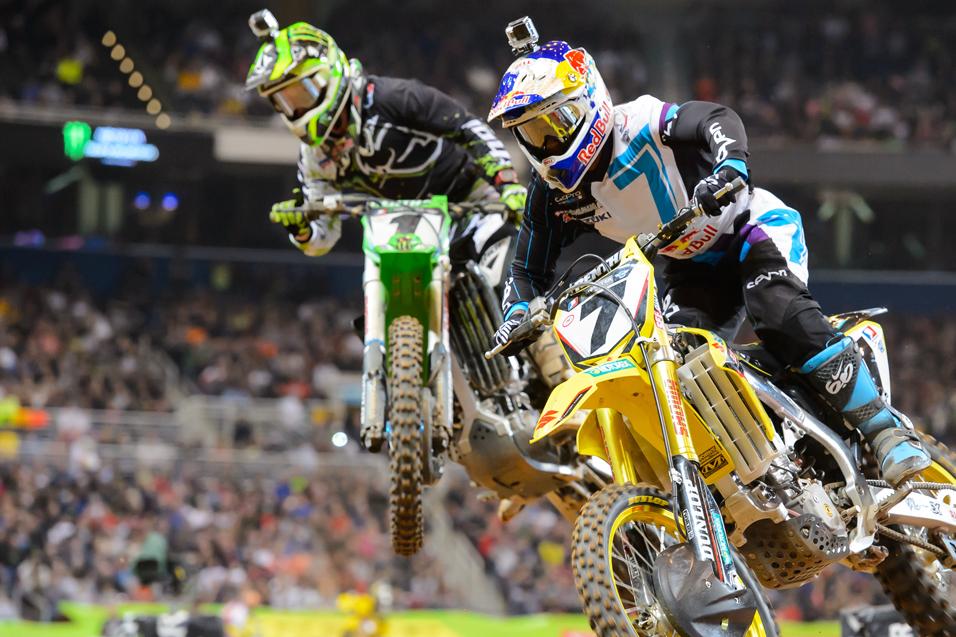 Advertisement | Advertise with Us
Edward Jones Dome St. Louis, MO St. Louis Monster Energy AMA Supercross Championship
Everyone loves a bit of controversy. The season had been fairly mellow thus far in my opinion. There hadn’t been any yelling or fighting amongst the top guys and certainly no red flag restarts in the 450 mains, as of yet. St. Louis brought not only all of that, but also maybe the best race of the 2013 season. I personally feel that the good dirt was the biggest reason for the great racing, but maybe that’s just me. Most of the passes were due to being able to cut back across the inside of the turns and generally having added traction. What the better dirt didn’t cause was the red lights, the red flags and the controversial passes made in the middle. That just made an already crazy race even crazier.

When the red light is turned on, that means don’t jump and don’t pass. Someone has crashed on the triple or near it, and there are riders and/or medical personnel in a compromised position. The red light replaced flaggers standing with red cross flags in an attempt to better grab the attention of the riders, while also keeping the flagger out of harm’s way. I feel it was an improvement, as a flashing light is easier to see and more out of the ordinary, and also gives the riders more time to react. Once that light is on, and you have to roll the triple, it then turns into a race of who can single the jumps the fastest. Many times, passes end up being made in the very next turn. I have seen riders close the gap and then set up a block pass from that opportunity. If the leading rider doesn’t safely charge through the area, he is almost always going to be passed in the next turn. It may not be the most ethical move but it’s effective racing, and these guys are looking for any slight edge they can get.

I have seen this play out many times and I am not sure there is a fix for it. Ideally, the rider up front would be able to put safety first through the red light section and then re-join the race pace once the area is clear. This is not the world we race in, however. I have been the guy in the second position many times in this spot over the years and I always looked for a way to benefit. It’s just the racer mentality. People may argue that racers should be more concerned with safety in this moment and while I may agree, I also know that this is wishful thinking. Racers, especially when battling for the win, will always be more concerned with the race at hand. It’s how we are programmed. We ride, train, study, eat and sleep to be prepared to capitalize on any advantage and in the heat of battle, even the red light situation is, unfortunately, no different. 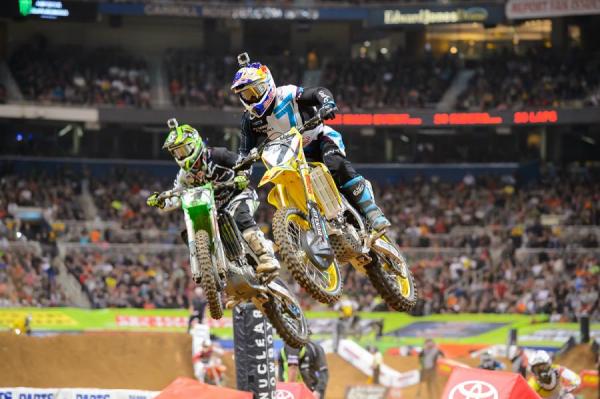 When James Stewart slowed, even for a second, in that section, Villopoto gained time (as did Justin Barcia). Villopoto was already fired up from the aggressive passing that had been unfolding so when he rolled over the triple and had a window of opportunity to force it in the next corner, he took it. According to the AMA, they were past the area of danger and into the yellow flag territory, which made the pass legal. I can understand JS7’s frustration as he felt they were still in the danger zone. I can also understand Ryan’s view that he felt they were into the yellows and he had the inside and wasn’t going to give James a chance to close the door. All of these decisions happen in an instant and it is very easy to hit the slow motion button on the DVR over and over and make sweeping conclusions. But they don’t race in slow motion. In the tunnel vision hysteria of main event racing, up front battling for the win, I personally can’t fault RV for going for the W. Passing has been such a chore in 2013, he may have felt this was one of his only chances. Fortune favors the bold, as they say.

Watching the race unfold, I truly feel that Villopoto would have found a way around regardless as he just seemed to have more than everyone else on Saturday. I am sure there will be many, many talks between the AMA and FIM, Feld and the teams on clarifying the rules. Of course the Suzuki teams think the pass was illegal, while Kawasaki and all of Washington thinks it was just clever racing. It will be interesting to see if the rule book is amended moving forward and if the events of Saturday change the face of the championship. I am sure there are some hard feelings floating around but hopefully cooler heads prevail and it leads to more exciting races like we saw in St. Louis. Anyone have any idea how much it would cost to haul that dirt around to every race?