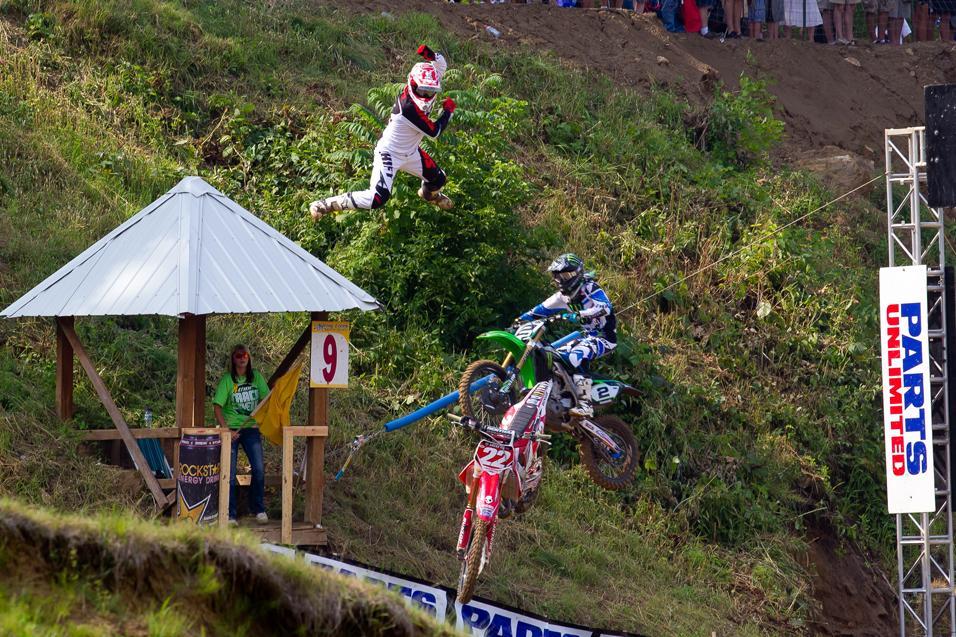 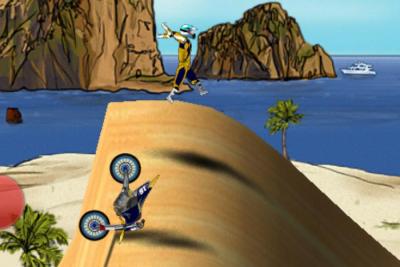 If you were one of the 54,000 people at Cowboys Stadium last Saturday night, or the millions watching live at home (or at the Racer X Viewing Party in Indianapolis), then you probably already figured out what this list is about: memorable big-air crashes that can best be described as ejections. That's the kind of bizarre crash suffered by SX debutant Zach Bell of the GEICO Honda team, captured on film here by James Lissimore. Here are a few that of recent vintage that we recall; if we missed any, add them in the comments! 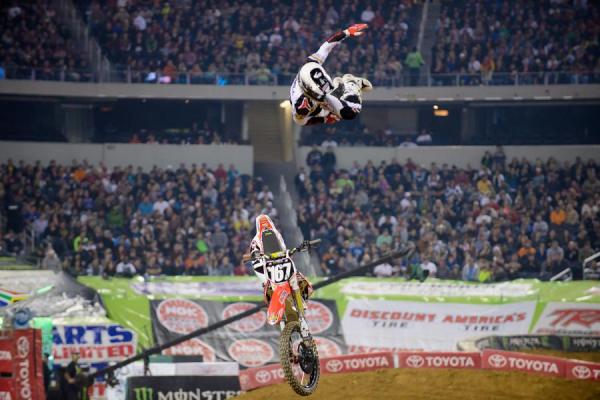 Monster Energy/Pro Circuit Kawasaki's Martin Davalos needed to have a good night in Phoenix last month after crashing out of the Anaheim opener right off the start. But in the heat race, Martin lost control of his bike as he headed into a banked left and launched his motorcycle over the walled berm in epic fashion, as captured by Vurbmoto's Ryne Swanberg. The good news is that he wasn’t hurt, and Davalos actually ended up qualifying through the LCQ and reaching the podium in the main. 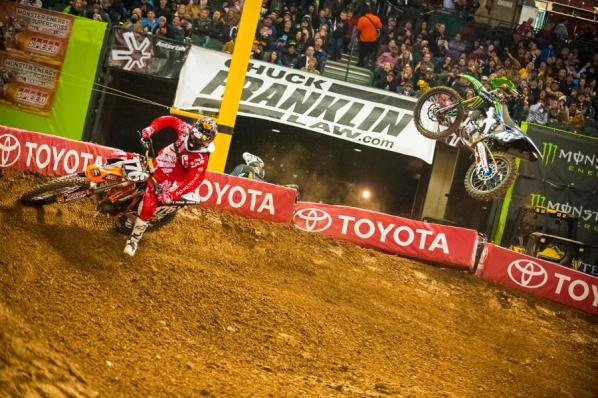 In our book, James Stewart is the fastest 125cc motocross and supercross rider of all time. He was prolific in the ways he won indoors and outdoors, setting records in both. But when he crashed, well, those were epic too. None may have been more spectacular than his crash over the bars at the 2003 East-West Challenge in Las Vegas, when he pushed it too hard and got out over his bars in the last rhythm section. The crash, captured by Simon Cudby, cost James a broken collarbone and basically that summer's 125 National Motocross Championship—once he returned, he won every single moto, and in the process debuted the “Bubba Scrub” at Budds Creek. 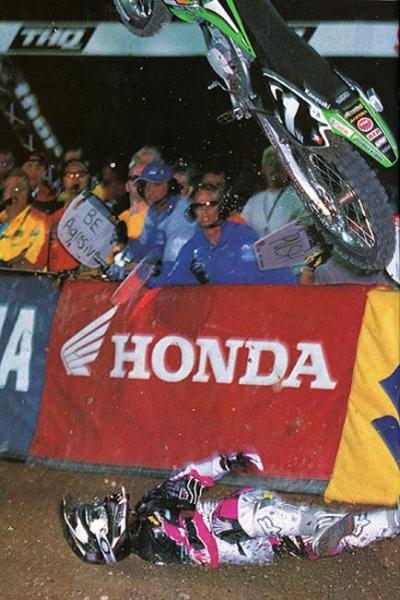 When Greg Albertyn was still trying to figure out supercross after three FIM World Motocross Championships in Europe, the South African legend was on a steep learning curve. He was as fast as anyone in the corners, but whoops and rhythm sections could be a real challenge. Crashes came often and with profound … ejectivity? At the Orlando '96 SX opener, during which #111 was still a sophomore in supercross, he was looking much more comfortable than before when—“Eject!”—he lost country in a rhythm section and went flying. Steve Matthes remembers it well:

“That Albee crash in Orlando is close to my heart. Last lap in the semi, he's holding the 5th and final transfer spot. Behind him is Ty Birdwell on a Matthes-tuned KX250. We were done. But then, Albee being Albee, on the last lap he totally ejects and Birdwell/Matthes make it into the main event. Poor Greg but a happy Steve, who was on a bonus program where he got 200 extra bucks.”

Yes, Matthes being Matthes, he refers to himself in the third person when it comes to the nineties!

Old-schoolers will remember Jason Upshaw's epic somersault ejection in the Los Angeles Coliseum at the first East-West Shootout, in 1985. It took place as part of the Rodil Cup, an early attempt at a “world supercross championship” by the FIM. He was coming down off the Peristyle into the stadium when got out of shape on the jump at the bottom and did a complete flip in the air. It's still a gem of a find on YouTube.

Another YouTube favorite is Mickael Pichon's step-through crash in Atlanta one year when it became obvious to him that he was not going to clear the big triple. The Frenchman landed so hard after he ejected that he blew his goggles off! He's lucky it wasn't worse.

“He looked like a gymnast coming off a trampoline!” shouted Art Eckman just a moment past 49:00 in this YouTube link from Unadilla '99. He was talking about Nick Wey, and if you watch it, you’ll see why.

Travis Pastrana's ugly crash on the last lap of the second moto at Unadilla in 2001 was one of the wildest, most unexpected ejects we've ever seen. Pastrana was so far out front he was cruising on the #1 Suzuki RM125, but he still pushed it too hard, and that led to a crash that would reshape his career—as we've written before, who would have ever guessed that the first moto earlier that day at Unadilla was the last major moto or race that the then-17-year-old Pastrana would ever win? 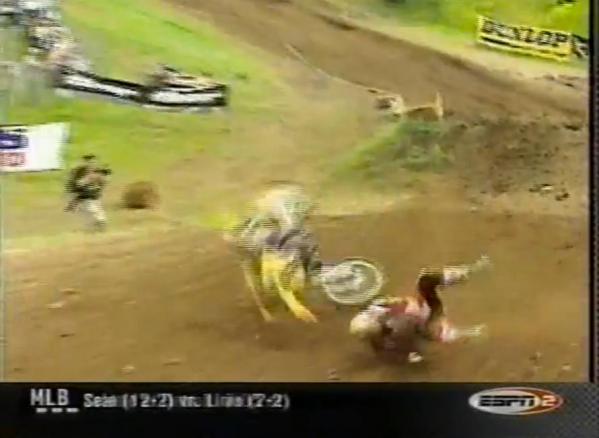 Ricky Carmichael had some real doozies over the years, but the strangest one we recall is still the late-race, all-alone, over-the-bars eject he did at Washougal in 2007. It was the GOAT's last visit as a racer to the Huffman family's beautiful motocross park in Washington, and he seemed to have the win in hand. But then he got a little squirrelly—okay, A LOT squirrelly—as he raced up to the big jump in the middle of the facility. The bike shimmied and shook so violently that it threw him up and over the bars, costing RC the overall win and eternal infamy—he kept his hand on the bars for as long as humanly possible! 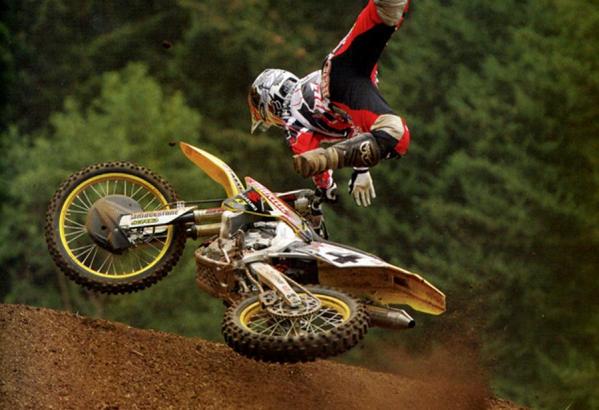 This one is the stuff of legend, as maybe just a few thousand people actually saw it—no video or photos exist—and it was downright crazy. One year in Las Vegas (maybe 1994), the track actually went up and over the old locker-room at the open end of the stadium. Late in the race Damon Huffman was going past Shane Trittler just as Shane got himself all out of control as he crested the peak of the building and did a somersault off his motorcycle. The crazy thing is that Shane—and he swears it, Huffman swears it, Ping swears it, and a whole bunch of other people who were there swear it—somehow landed on the back of Huffman's bike, passenger-style! Huffman didn’t crash, but rather rode to the bottom of the obstacle and let Trittler jump off the back.

A personal favorite: Brandon's First Race. No matter how many times we watch this, it's worth all 1:32!

Now we're down to the podium, and we think Zach Bell's crash might already have third spot nailed down. Number two came just two years ago at Spring Creek. Chad Reed's remarkable crash combined everything you want to see on a list of eject-style crashes like this: altitude, amplitude, jaw-dropping timing, a live global TV audience, no real injuries, and the man riding off like the champ he is. That was #22 on the first lap of the second moto, as he was leading the points in Lucas Oil Pro Motocross and battling Ryan Villopoto for the lead. It was insane! 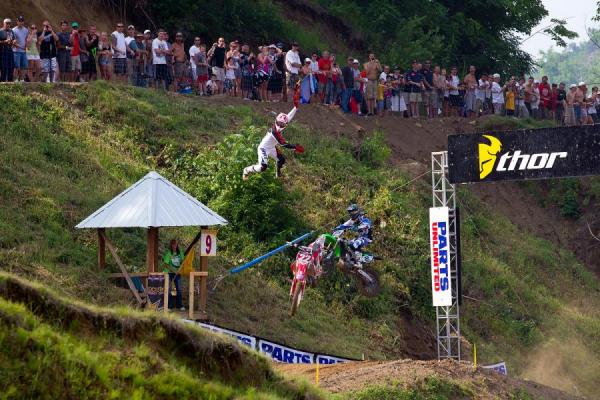 But the most notorious crash in at least outdoor national history must still be Doug Henry's incredible leap at Budds Creek in 1995, when he charged what's now called Henry Hill as he battled with Jeremy McGrath late in the moto, slipped off the back of his seat, and ended up twisting the throttle instead of letting go. In other words, he didn't actually eject. Henry didn't walk away, either—but he would a few weeks later. He landed from about six stories up, feet on the pegs, and the impact broke his back. Within a year he was racing again, within two years winning again, and in three years he was the series champion. Simply amazing. Here's the world's most overqualified pit reporter discussing it a couple years ago.