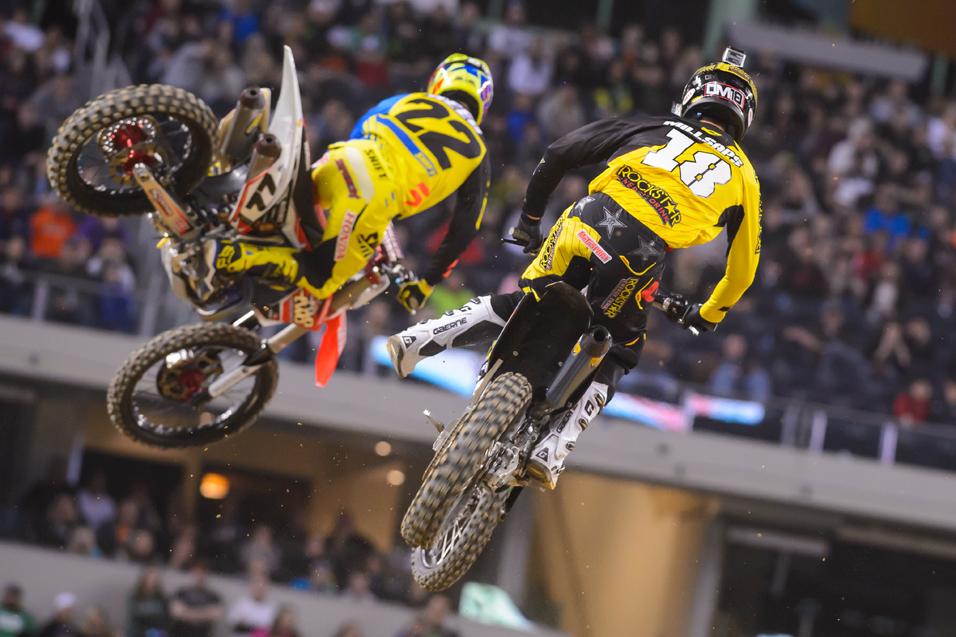 The most repeated word regarding the 450 class in the 2013 Monster Energy Supercross series is, “parity.” It’s possible to say that the sport has never witnessed a pack of racers be so close in speed, and the practice times at Dallas cemented this notion. Yoshimura Suzuki’s James Stewart and Rockstar Energy Racing’s Davi Millsaps traded the fastest lap three times before Stewart eventually claimed the pole. But what had the entire press box pointing to the gargantuan high-definition display in Cowboys Stadium was the list of the top NINE qualifiers being within a single second! Even the most veteran media members were shaking their heads and salivating for the main event.

Muscle Milk Honda racers Justin Barcia and Trey Canard were among the fastest times in practice but gated poorly. Meanwhile, the unflappable Millsaps pulled the Nuclear Cowboys Holeshot, but was quickly surpassed by Monster Energy Kawasaki’s Ryan Villopoto. Hot on their rear fenders were Discount Tire TwoTwo Motorsports' Chad Reed and Red Bull KTM’s Ryan Dungey, and just like that the stage was set for a brawl that oddly wouldn’t materialize. 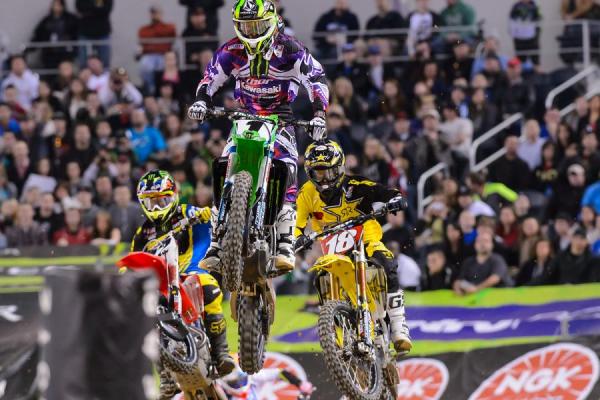 You all know the results, and have read the course didn’t lend itself to passing, but what is remarkable is how close these guys were. Its hard to imagine a mere tenth of a second being significant, but over 20 laps those tiny fractions and little victories in RV’s corners added up to a five-second margin of victory at the checkered flag.

The hours of testing and the over obsessive demands of the riders from themselves and their machines made the difference in winning the race, and making the podium. A single slip by Millsaps could have saw him go from 2nd to 4th in a flash. It was a beautiful thing to watch four of the best racers in the world attack the hard, slippery race track. Reed would put together a couple perfect sections to draw to Millsaps fender, then lose ground with the slightest twitch of his wheels. Dungey’s attack seemed to streamline with each passing lap, but it wasn’t because he was jumping a crazy rhythm combo, or blasting the whoops. He merely picked up a tenth here and there, and those impossibly brief moments almost made the difference in Davi’s point lead falling to 17 (if he would have finished fourth), instead of growing to 21 heading into Atlanta. 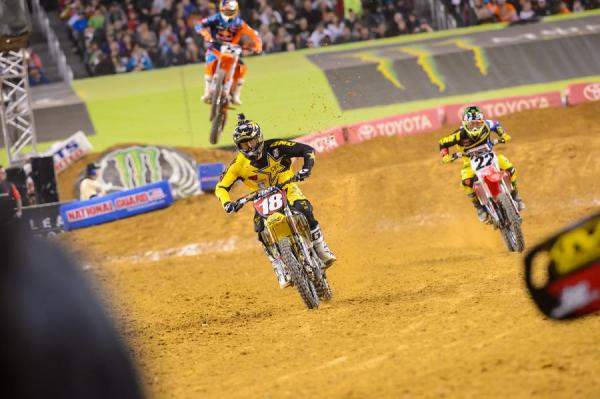 Millsaps was able to seperate from Reed and Dungey, but it wasn't by much.
Simon Cudby photo

It’s astonishing how accurate the racers are in 2013. The advantages are being earned by a single click of the suspension, or a 1/4 of a pound of air pressure in the tires. The differences between the riders are the slightest labors of cornering technique and making the most of every opportunity of traction. The days of making a huge mistake, or getting a poor start then charging through the pack don’t exist in 2013. Millsaps hasn’t established his 21-point lead with a winning streak, and Dungey hasn’t fallen almost a full race behind with a DNF. The two-time defending champion didn’t walk away to the win in Dallas after leading the first lap. The victory in Dallas by Villopoto (and extension of the points lead by Millsaps) was manifested by gaining tenths of a second in every section, and winning the game of inches.