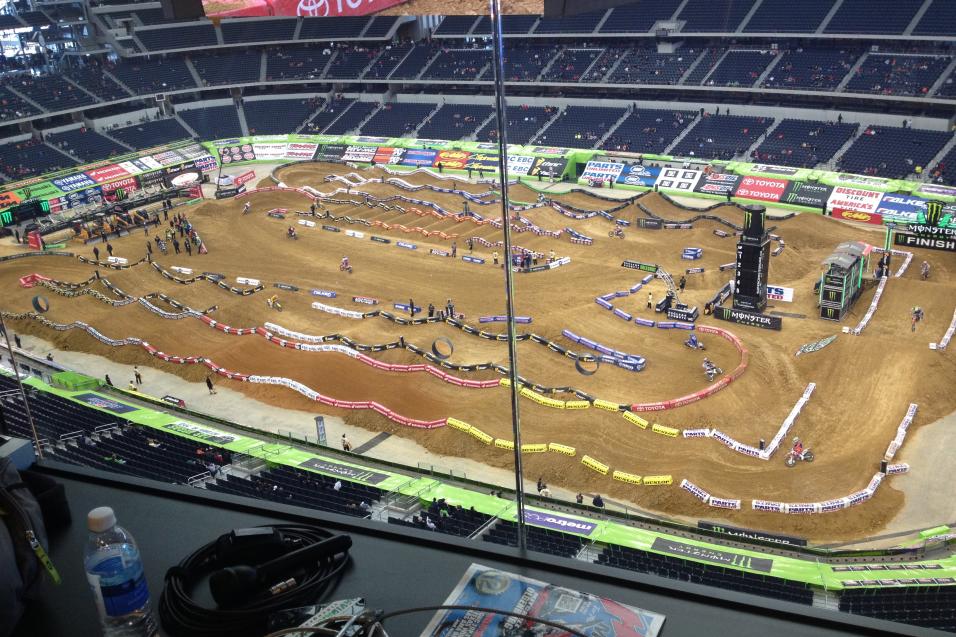 We’ve headed east in Monster Energy Supercross, with Cowboys Stadium in Dallas, er, Arlinton, Texas, serving as host. The stadium is gigantic, it has an incredibly large video screen, and pretty much everything else is huge also. We’ve been in this building for a couple of years now, but we’ll probably never get our heads totally wrapped around it.

The dirt is hard here (and slick) as usual in Dallas. Most of the rhythms seem pretty simple, we haven’t seen any major changes or moves yet. Those that watched the animated track map provided by the SX folks during the week noted there were whoops after the start, but since the track blueprint came out, the whoops and a rhythm lane have been flipped, so riders now hit a rhythm off the start. At the end of the lap comes the whoops, which are deep and tough, and the football layout returns us to the more traditional rectangular layout, with some good bowl berms. It will all probably come to the way the soil shapes up—the track could be one lined once it breaks in. We’ll see. 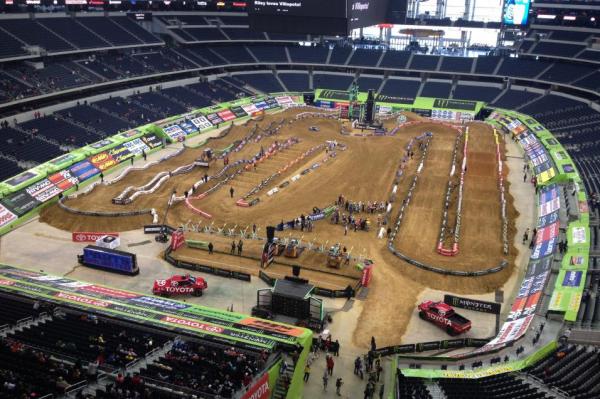 This is the kick off of the East 250 Series (in case you haven’t noticed). We’ve talked to rookies Zach Bell and Justin Hill and they seem excited, but they haven’t put expectations on certain results. We’ll see how the nerves impact them, but so far they seem to be doing a good job treating their first supercross race like any other race. So far. Dean Wilson is here and most see him as a favorite in the east—and he topped everyone in the first timed 250 session. Marvin Musquin, Wil Hahn, Gavin Faith and Vince Friese were next. 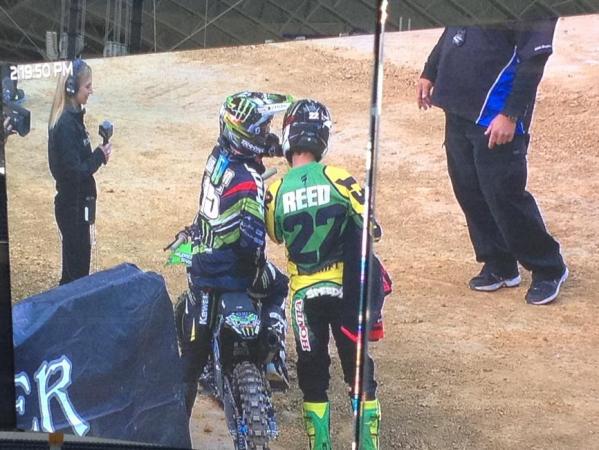 In 450s, James Stewart logged the fastest time in the first timed session, but then later had a big crash when he went over the bars in a rhythm lane. He was eventually able to get back up, but he then rode back off to the pits--the crash was pretty gnarly. We'll update you if we hear anything there. Trey Canard looked much quicker here than he has the last few weeks, which didn't go so well for him. He was second fastest, with Ryan Dungey, Justin Brayton and Ryan Villopoto rounding out the top five.