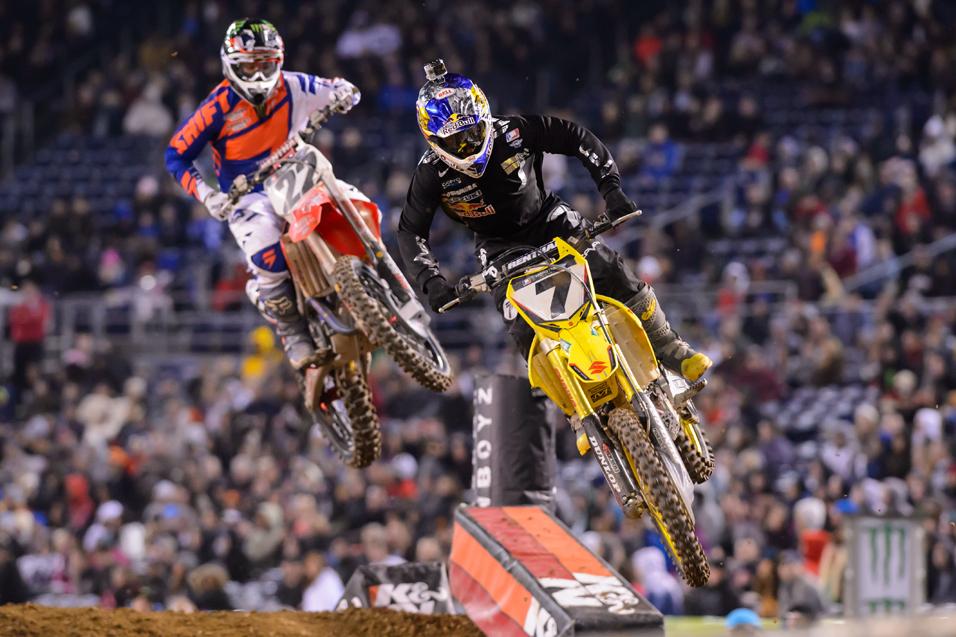 There’s no better way to describe this supercross season then to look at the San Diego 450SX main event. And more specifically about five laps around the middle of the twenty-lap main event. I’m not going to make a rash judgment based on these laps and throw out things about new sheriffs that are in town but it is an interesting snapshot of where we’re at in 2013.

Out front was the points leader, Rockstar Energy Racing’s Davi Millsaps, and we’ve all talked about him and his rebirth this year. In second was the rookie Justin Barcia who was holding strong and third was JGR/Toyota Yamaha’s Justin Brayton. It was some nice riding by those men but it was the riders behind those three that caught my eye. KTM’s Ryan Dungey was fourth, Monster Energy Kawasaki’s Ryan Villopoto fifth, Yoshimura Suzuki’s James Stewart sixth and TwoTwo Motorsports Chad Reed seventh (although to be fair to Reed, earlier he was on the back of Millsaps and went down).

And those riders, with a combined seven supercross championships, were all in a row and not really gaining on the top three. In the past, we’re used to seeing those alpha dogs finding their home at or near the front—short of a bike breaking or a massive crash. But this wasn’t happening at San Diego. The top three were matching (or going below) the big four’s lap times. It took a couple of mistakes by Brayton to eventually allow the four champs through, but Barcia and Milllsaps were long gone by then. 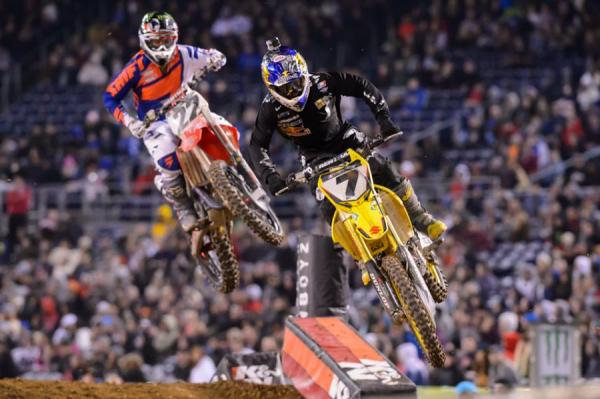 Dungey, Villopoto, Stewart and Reed (pictured above), battled on Saturday, but it wasn't for the top spot.
Simon Cudby photo

Stewart’s knee, Villopoto’s mistakes, Reed and Dungey’s so-so starts have allowed riders like Millsaps and Barcia to win races and gain confidence. In talking to Brayton after the race, he was very excited about the way he rode despite all those riders eventually finding their way past.  A bit of confidence gained by Brayton is a chip off the mountains that RV, Reed, Stewart and Dungey have created over the years. It just struck me as so strange to see such great riders and champions in their own little battle, but it not be for the lead.

This year we can’t just pencil in the top four based on past pedigrees, they’re going to have to earn every spot on the track and depend on things that their competition has needed for years. The essentials to a good race are get a good start, don’t make mistakes and get a bit of luck. No longer can they rely on just being that much better on a dirt bike to make it so that those factors don’t affect them.

Millsaps, Barcia, Brayton, Trey Canard—they smell blood in the water and it’s the toughest test the big four have had in years. Just another reason why the 2013 Monster Energy Supercross series has become must-see TV.