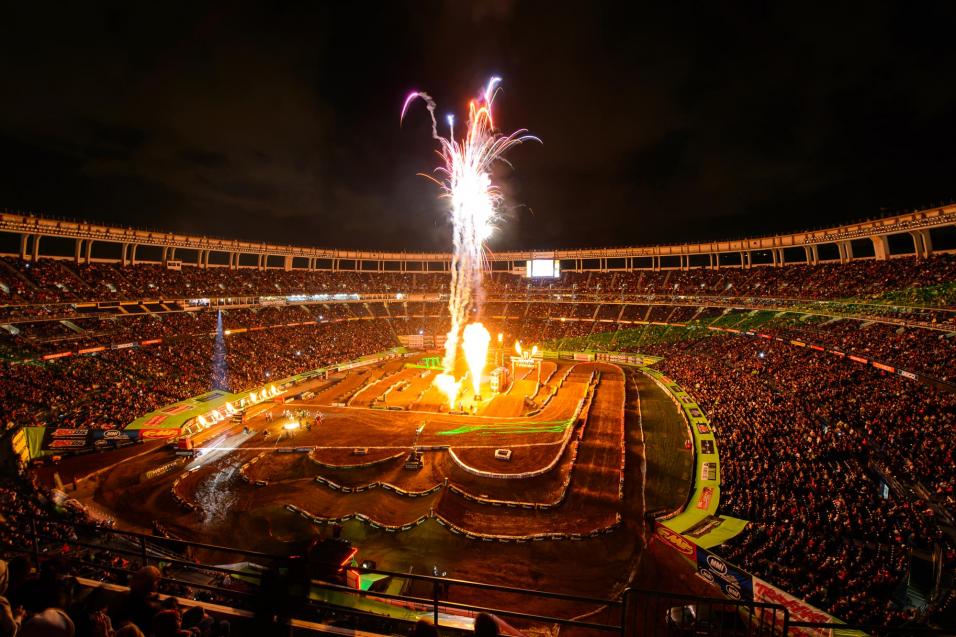 Davi Millsaps just keeps battling and fighting and the points (and wins) keep coming. From a heat race where he was passed for the lead by James Stewart—but upped the pace and kept the heat on Stewart all the way to the finish—to the main event, where he withstood pressure from Justin Barcia and Chad Reed, there just seems to be no rattling the Rockstar Energy Racing rider. And his points lead is up to a whopping 19 after just six races.

The San Diego track was a tough one, not due to the technical design or obstacles, but because of the soil. Over the years the SD track has grown harder and slicker, and then rain before race day made it rutted and muddy in spots. Overall, traction was hard to find, and any rider who really tried to push it and make up time suffered—hence costly washouts from Reed and Ryan Villopoto.

Justin Barcia had a wild ride in his heat race, when he tagged a tuff block while leading, and ended up bouncing side-saddle on his bike. He then detoured through the mechanic’s area before regaining control, and when he re entered the track, ended up battling with Reed. Reed didn’t like seeing Barcia come over on him, and they then engaged in some bar banging. “Reed just doesn’t like me, he never has,” said Barcia. “We had some words after the heat race.”

After a rough race last weekend courtesy of a bad start and a crash, Monster Energy Kawasaki's Ryan Villopoto was expected to bounce back this weekend. But, he had another bad start and another crash. Late in the race, he was up to fourth and trying to run down Ryan Dungey for third, but when he lost the front end, he lost ground. RV was fastest overall in qualifying, but although he slowly made up ground in the main, he never quite showed the speed he normally has in the main--such as in Anaheim 2, when he gobbled the field right up. The defending champion is a full 27 points down on Millsaps, tied for third in points with Trey Canard.

Another so-so night for Canard, who had a bad start in the main and didn’t get a look at the lead pack. After starting the season on fire with podiums, and nearly taking the points lead, the Oklahoman has cooled the last few weeks.

Not a good one for Broc Tickle. The Dodge Sycuan RCH Suzuki rider finally got the start he wanted—second behind Millsaps—but he wasn’t up to the lead pace, and seemed to tighten up. He dropped all the way back to 11th, which is a worse result than he had in previous weeks where he started further back. 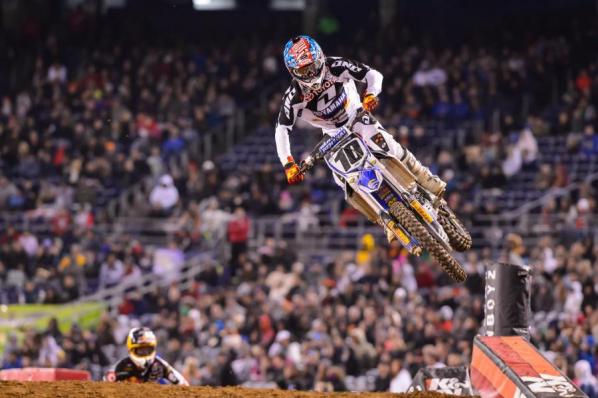 Josh Grant was out for the JGR team with a shoulder injury, but Justin Brayton carried the flag, running third for a long way. He ended up seventh in his best ride of the year. 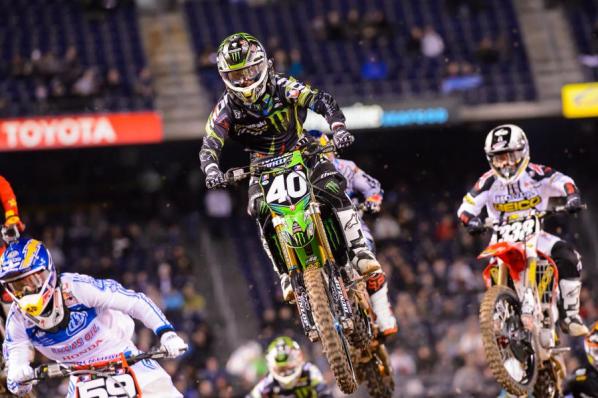 Martin Davalos crushed it in practice and won his heat. Then he crashed in the main event. Heard that one before?
Simon Cudby photos

Justin Brayton keeps getting stronger following a slow start to the season. He put his JGR Toyota Yamaha up front early and hung tough with the Dungey/Villopoto/Reed/Stewart pack for most of the race. They edged ahead, though, dropping Brayton to seventh, but it was by far his best 20 laps of the year.

Rough night for Lucas Oil TLD's Cole Seely, who crashed in his heat race and had to go through the LCQ to make it to the main, and then had more troubles there and finished outside of the top ten. Two weeks ago, Seely was in the points hunt, but now he's over 40 points behind leader Ken Roczen.

Roczen admitted he didn't feel comfortable all night for some reason, but he still charged hard at the end of the race and nearly caught Eli Tomac for the win. He was angry after the main after coming up just a bike length short of stealing the win.

Tomac got held up badly by lapped traffic late, and also seemed to be taking it a little easy on the difficult track down the stretch. That almost opened the door for Roczen. Tomac leads the west in wins with four, but is down 17 points to Roczen with three races to go.

Surprise rider who was really on it? JAB Racing’s Matt Lemoine. He was flirting with top-five lap times in practice, then finished fifth in his heat and 13th in the main. Lemoine is learning quickly in his rookie 450 SX campaign.

Surprise in the 250 Class? HRT’s Austin Politelli, who ran a rock-solid fifth most of the main, and then snagged fourth when Malcolm Stewart crashed. That’s a career best for the second-year pro.