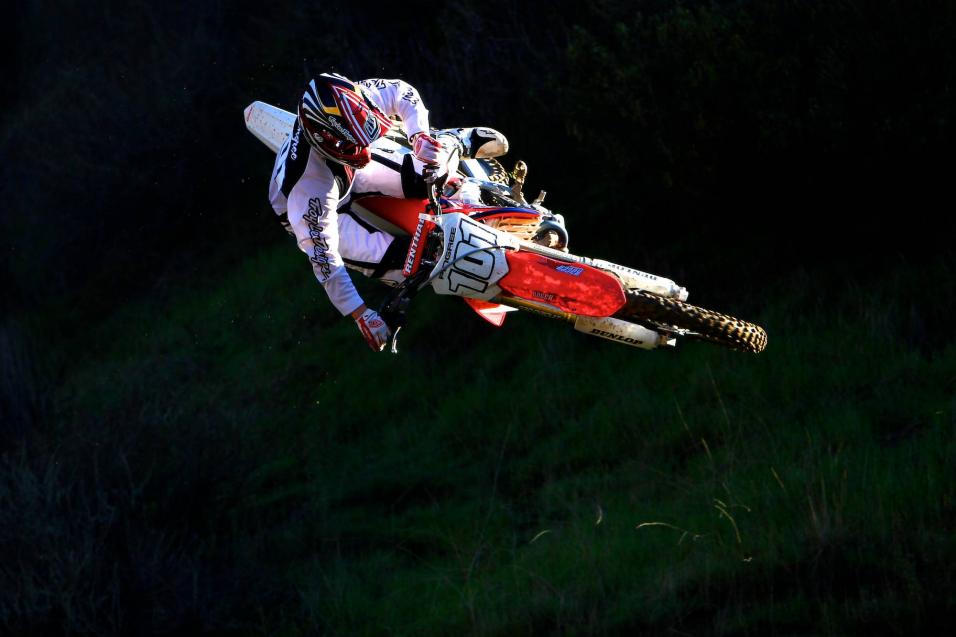 I'm going to cut to the chase. In the motocross industry it is like North Dakota does not exist. Probably since we are too far up north to ride year round and have not produced fast amateurs like other states. Or have we? A young man by the name of Tanner Reidman has won a Pro Lites Arenacross main event. Actually, I believe it was two. Did anyone notice? Nope, not at all. There is also a 16 or 17 year old kid named Ryan Peters, and this kid rips. I know people always say "oh so and so will be the next big thing", but that's not what I'm saying. This kid really is fast; he was the 250A and Open A state champion for 2012. I know you have some sort of connections with whom ever. Just get someone to hook this kid up.

I’m not sure what you do for a living, Bill, but let’s just say you work at a sandwich shop. Let’s just say it’s a Subway. Do you hire a guy because someone told you he made an awesome turkey sandwich once at a backyard barbecue? You probably want to meet him, interview him, get to know him, see his work firsthand and then make a decision. Well, aside from the delicious cookies and $5 footlongs the motocross industry is exactly the same. Unless Tanner or Ryan can get to some amateur nationals and perform well they will go undiscovered. If they show up at Loretta Lynn’s and do well I’m sure they would get a chance to talk with the guys at Team Green and Suzuki and KTM and every other company in the industry. You have to earn support, Bill, you don’t just get “hooked up” because you are fast at your local track. I was a three-time Montana state champion and four-time Arizona state champion but that did nothing to get me industry support. I had to show up to amateur nationals and beat the best riders in the country before I got a shot. Thankfully my parents were able to help me do that; it wasn’t easy for them. I’ll keep an eye out for them but they will need to get to some big races and do well.

Every race we hear Ralph and Fro talk about how pumped the crowd is and how packed the stands are. Living in the Midwest, Indy is the only race close enough for me to attend and it's always a good turnout, but never packed. Watching this weekend’s Anaheim round I couldn't help but notice MASSIVE chunks of the stands with little to no people in them. I know the sport is on the rebound and got hit hard by a failing economy but is there an unspoken rule that we just aren't going to talk about the reality of how bad it is? I'm sure Feld and Monster don't want to put out the impression of a struggling brand. I feel like if the reality was shown and people were told to get their asses out there, even if it is a 5 hour drive, maybe they would show up. Just my two cents, which I'm sure is worth about as much as a Canadian Tooney at a south Texas strip club.

Despite what Jeff and Ralph read from a script on the broadcast the turnout at A2 and A3 was dismal. After a sold-out opener I think most people here in the overtaxed wasteland that is southern California had to decide if they wanted to keep the lights on in their house or try to buy tickets for another round of supercross. By the number of available seats in Angel Stadium those two weekends I think the masses made the right call and watched from home. Sadly, the economy is allowing many fans to buy tickets to multiple rounds right now. And yet, ironically, the movie Warm Bodies grossed 20 million this week. That’s a head-scratcher.

Anyhoo, don’t worry about the health of the series. The supercross product is great and once the series heads east to cities that don’t get to see SX three times in one month the attendance numbers will come back. And I’m pretty sure those Tooney’s are useless in every state south of Minnesota.

Most riders use all the protection they can as amateur riders. I think the input from parents and the fact that all the other kids are wearing it makes it acceptable. That translates the first couple years they race 250’s. Remember when Stewart wore a chest protector? Once they hit the 450 class, however, the top riders aren’t wearing chest protectors anymore and very few are still wearing neck braces. There are two things going on here: First, it’s more comfortable not to wear extra protection. You feel much more agile on the bike and less encumbered by the plastic and foam of protectors. In some cases this can translate to faster lap times. I wish that weren’t true but I’ve seen it happen. The second thing is that these are just young kids who want to look cool and be accepted. For the less secure riders, wearing a chest protector and neck brace is like going to high school wearing high-water slacks, a clip on tie and a hat with a propeller on it. Nerd city, man. It’s unfortunate that there is a stigma attached to it though because I believe that some injuries could be prevented and/or reduced if everyone were wearing chest protection and neck protection. Do you need a chest protector to ride a 450? No. You only need it when you crash a 450 and it chases you down and pummels you.