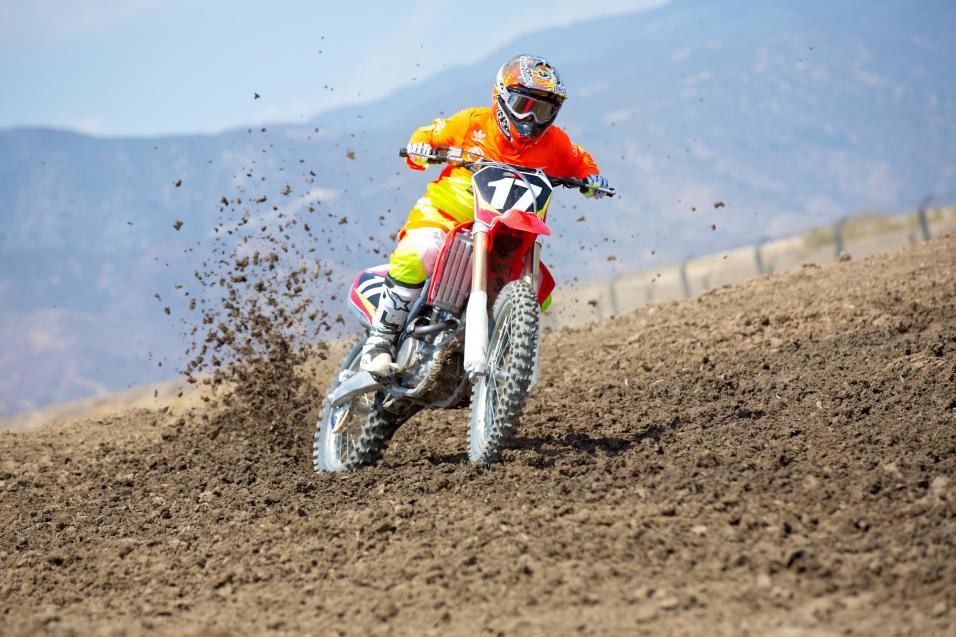 My question is concerning the RC4 Road to Supercross. RC stated several times during the A1 broadcast that he feels there are unqualified riders racing Supercross. Developing AX as a feeder series will supposedly help. How can a rider make it through timed qualifiers & heat races & still not be qualified to race the main? Also, it seems as though most of the big crashes, at least last season, happed to the big names. Didn't most of these crashes occur while these top guys were racing each other or even all by themselves? Were lappers very often involved? Tuff Blocks seem to cause more accidents than slower riders. It's impossible to know what it's like without actually racing & I would definitely be a danger to myself & others on a Supercross track! Thanks for your insight.

It will be much harder for these guys to make it to supercross now.

Mitch,
After careful consideration and a look back at the statistics I’ve come to the conclusion that you are absolutely correct: Tuff Blocks are the most common cause of crashes. And so, as such, I’ve taken steps to have Feld change the Road to Supercross and make it applicable to the Tuff Blocks only. Riders will be able to join the supercross tour as they wish but Tuff Blocks will be forced to withstand a punishing number of arenacross events before they will be considered for the “big show.” Hopefully those soft foam cubes will learn to stay put before they jump into the big leagues. Thanks for your input.

I recently watched The Great Outdoors Episode that showed a few riders talking about how hard it can be to make a living in motocross, and wondered what you thought about the episode. The episode seemed to try and tell the story of how financially hard it can be on motocrossers, but I thought where do I sign up for the life of a 3000 sq ft house in California, fancy cars, and motor homes that cost double the price of the average American home. The riders continually talked about how they do not have an education or skills for jobs after motocross, but do they not understand how the average college graduate has $25,000 in student loans and the only job they can find is serving coffee at Starbucks? They also spoke about how expensive the sport is for the rider, but I am not sure how many more podiums a tour bus gets you over a Minne Winne. As a former racer who is transitioning into the regular workforce, should we ham and eggers feel sorry for these riders?

Supercross stars get the money, the chicks… and the glory. Hey, is that me and JT in the background?

Bill,
This whole topic boils down to perspective, and riders just don’t have any of it. How can you have any concept of the big-picture when all you’ve ever done since you were five is race motorcycles? Very few of these guys understand the value of a dollar or how difficult a dollar is to earn in the real world. They are just pissed that their sponsors have cut them down to a salary that still puts them above middle class pay here in the US. The understandable frustration for some of these riders is that they are 99% as talented as the top riders in the sport. They can literally be on the same second as the winner when you look at lap times and while Villopoto and Stewart are making seven figures, a guy like Chris Blose is just hoping he can make his truck payments. It’s a little unbalanced. I don’t know if you should feel sorry for these guys… they are doing what they love and they can quit and do something else anytime they want.

Feld… Feld… Feld. Ping can you explain to me why I was watching someone name Rutledge Wood do pit coverage at A1? After a friend said oh he is big in NASCAR I said “Oh, and why am I watching someone named Rutledge Wood?” As you know not may racers walk away from our sport with enough money to retire at age 30 or something and the scariest aspect is trying to figure out how to make a living. Of course the best scenario is to get a job in the industry, again not many jobs. So maybe Feld could have tapped a former rider in need of help or a job, umm Jason Thomas… Hey even you Ping on nights you do not have to work. Is Feld under the impression Rutledge followers are going to follow him to Supercross and tune in? Or is this another asinine Jamie Bestwick move. Maybe I’m being harsh and Rutledge knows something about our sport, but with quotes like…

“This is my first Supercross, thanks for having me.” Ok, so he does not know too much if he has never been to one.

“The spectators are pumped and excited to be here.” No shit, no one pays all that money in tickets, hotel, food and gas to go somewhere that sucks.

No, I’m right, he has no business being there and it’s a slap in the face to someone in our sport who could use a job.

P.S.  what a great race, congrats Davi Millsaps (and Trey Canard, what a comeback!)

Those headphones are so distracting. Stupid headphones.

Mike,
Full disclosure: I didn’t watch the broadcast. I did hear quite a bit about it though. A common theme was that the show was great… on mute. Ralph does his thing, Fro tries to be an announcer instead of a color commentator guy, Ricky says things like “preparate” and Erin walks around with those enormous… headphones. I can’t see anything but the… headphones. The truth is that people won’t be happy no matter who is doing the job. Just enjoy supercross on TV and get over it.


Have a question for Ping? Email him at ping@racerxonline.com