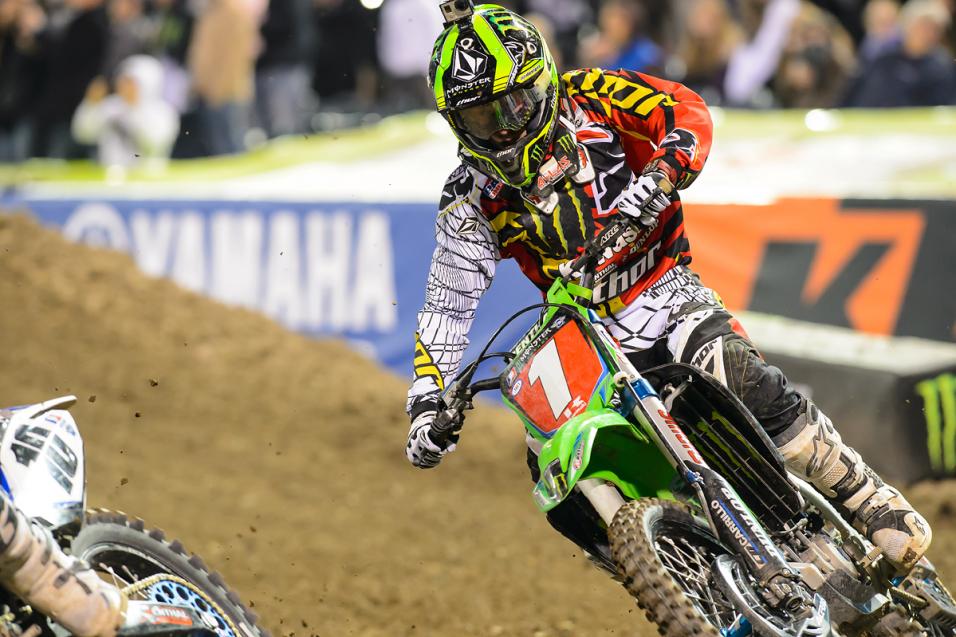 The Moment RV Opens The Door

Consider the 19 other riders on the gate for Monster Energy Supercross the variables, and Ryan Villopoto the constant. While the likes of Trey Canard and Davi Millsaps overachieved based on expectations, and Ryan Dungey and Chad Reed seemed a little more reserved, and James Stewart serving up both good and bad on the same night (as is often the case), 'ole RV did exactly what was expected of him. He hauled ass. Straight up. We're talking super fast from the first time bikes rolled out on the track. He was fastest in the first timed practice, second fastest behind James Stewart in the second, and then went on an absolute tear through the pack in his heat race, erasing all of Justin Barcia's massive lead to nearly run him down over the final two laps.

Before the main, the story really was shaping up as “Can anyone stop Ryan Villopoto?” He grabbed the same inside gate Eli Tomac had used to get a great start and roll off with the 250SX win. And even when he blew the start, victory still seemed possible considering how much ground he ate up in his eight-lap heat. But then it started to come unraveled. About the time Villopoto got to the top ten, he couldn't find running room, stuck in a torrid battle at mid-pack. All of his lines were taken away, and at one point, while battling Josh Grant, the champ ended up off the track.

RV opened the door with a 16th at the opener.
Simon Cudby photo

Okay, chances of winning were pretty much gone after that, but they were dashed for good when he landed on a Tuff Block at about the same time he was passing Stewart. It was a big crash, and he even got up hobbling a bit. Later, he crashed again, but the damage was already done by the first one.

Many great stories emerged from Anaheim, chief among them the performances of Millsaps and Canard. But had Villopoto holeshot the main event and put his crazy speed to work, the supercross landscape could look much different right now. After two-straight Anaheim 1 wins, the champ will now have to build a comeback, a much different scenario for him, and for everyone else.