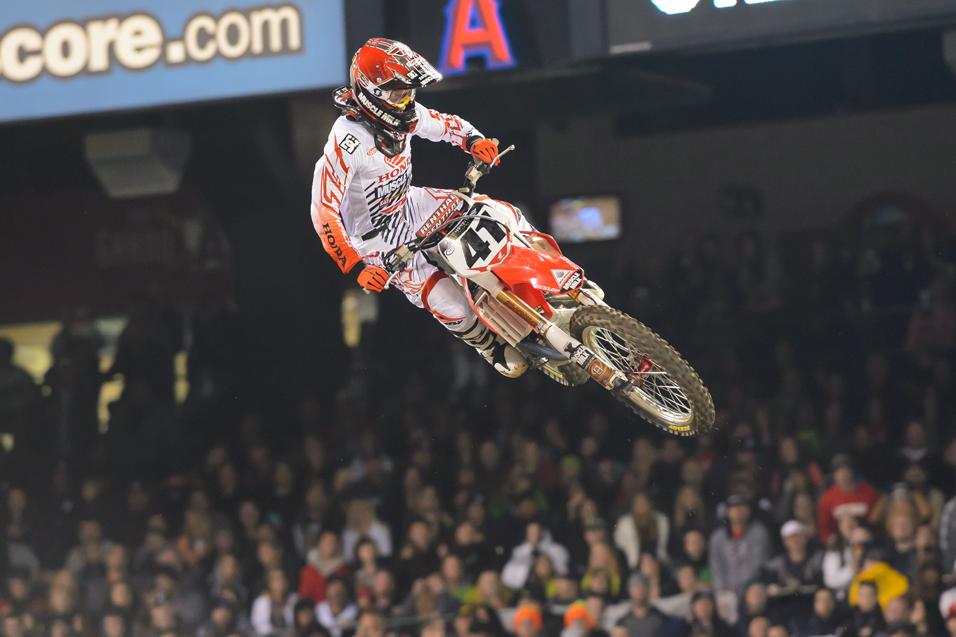 - Not a good night on the track or the lap charts for two-time defending 450SX champion Ryan Villopoto. He had six laps over the one-minute mark.

- Dealing with a knee injury suffered in practice, James Stewart just tried to ride consistently. He averaged a 58.609 and only exceeded the one-minute mark on the final two laps.

- Kyle Chisholm, after dealing with an ankle injury during the off-season, got stronger as the race went along. He set the latest fast lap in 450SX with a 58.134 on lap 11.

- Jake Weimer, en route to a very quiet fifth, began the race with a string of nine straight laps in the 57-second range.

- Davi Millsaps and Trey Canard matched each other's pace the whole way. Each rode laps in the 55-56 second range until finally rising into the 57s on lap 14.

- Matt Lemoine tailed off down the stretch—going over the one-minute mark the last six laps—which may have been a byproduct of this being his first 450SX race.

- Bobby Kiniry was only able to break the one-minute lap mark three times in the opener (laps 4-6).

After the season opener Ryan Dungey stated: “When I got to lap 10 I kind of had enough of the cat-and-mouse, hanging in fourth. I really wanted to make a push.” Dungey would tip-over in a corner on lap 16, but secured third when Barcia made a mistake of his own shortly after. Let’s compare the times from when Dungey began his push, and see if he made up any ground.

As we can see from the lap chart above, Dungey made a push, but Barcia was able to withstand the onslaught.

Davi Millsaps and Trey Canard locked horns down the stretch, delivering one of the most exciting finishes in Anaheim 1 history. Let’s take a look how it played out during the final laps.

Canard used a lap 17 sprint to gain almost two seconds on Millsaps. The two traded blows on the following laps, but costly mistakes from Canard on the final lap allowed Millsaps to reel him in, retake the lead and subsequently the win.

Check out the charge by Millsaps—he had not logged a lap in the 56s after lap 13, but he dug deep on lap 20 to go back into the 56 one last time. That helped him secure the win. 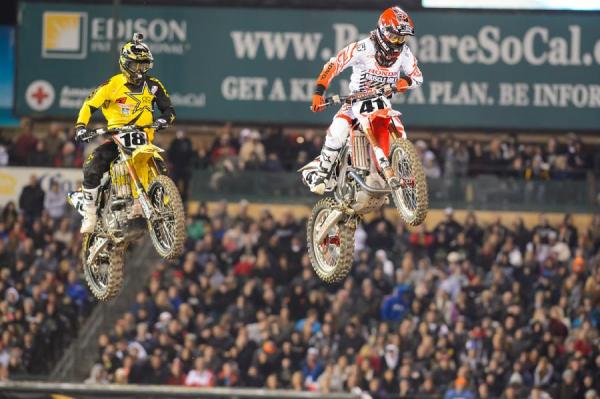 - Tomac also threw down two laps in the 55-second range—the only 250 rider to achieve the feat all night.

- Of the riders that completed all 15 laps, only four failed to have a lap over the one-minute mark—Ken Roczen, Cole Seely, Ryan Sipes and Zach Osborne.

- After a poor start, Osborne charged from dead last to secure seventh in his GEICO Honda debut. He set a blistering pace down the stretch, throwing down two 57-second laps in the final three, including his fastest of the night—a 57.362—on lap 15.

- J-Star JDR KTM’s Joey Savatgy and Lucas Oil/Troy Lee Desgins Honda's were the only rookies to make the night show. The Georgia native was very consistent on the lap charts with 12 of 14 laps under one-minute.

One of the better battles of the night took place in the early going between Malcolm Stewart (who held down third at the time), Cole Seely (fourth at the time) and Jason Anderson (fifth at the time). Stewart would eventually drop positions to both Seely and Anderson, but let’s dig a little deeper to see where he lost time.

Eli Tomac set a scorching pace early, and managed to maintain it to the end, but let’s look at just how he opened such a big gap over Ken Roczen.

Tomac used two 55-second laps to pull away, but as you can see from the lap charts, K-Roc was setting quite the pace himself, and was not that far removed from Tomac. Consider it a case of Roczen going fast, but Tomac just going even faster. Lap 5 is where Tomac did real damage, going 55.2 while Roczen went 56.9. 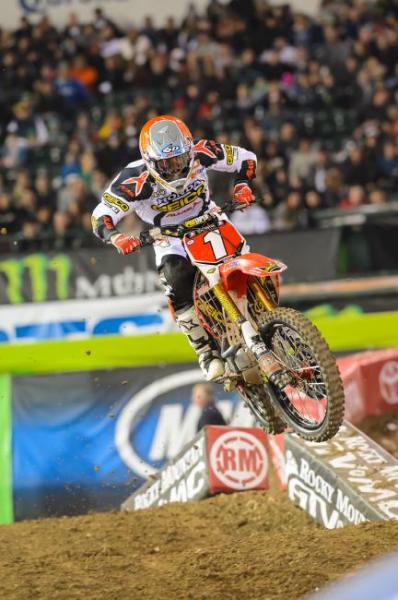