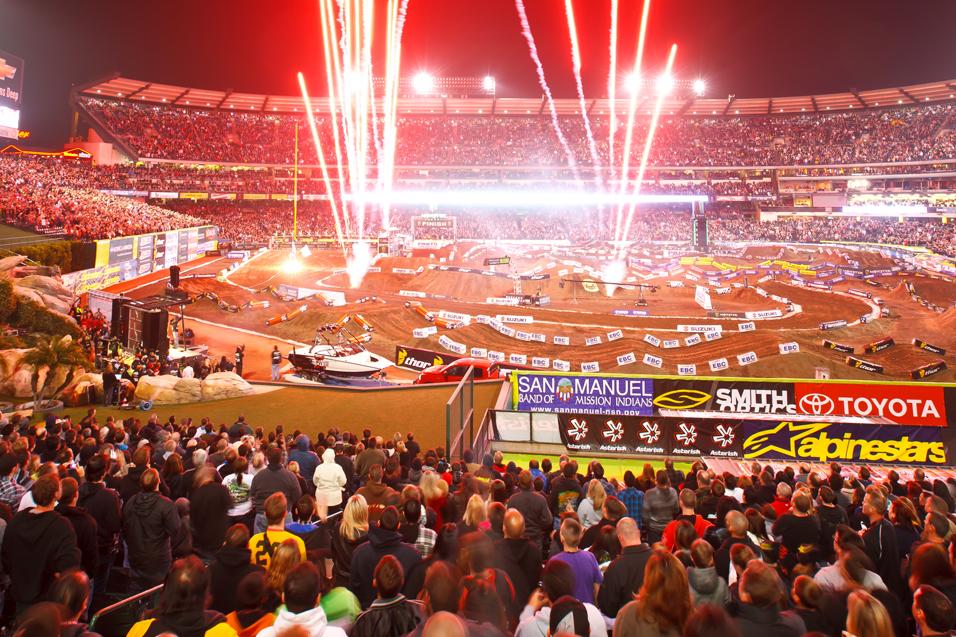 Rev Up Anaheim I

Hello, everyone, and welcome to the Rev Up. Let’s begin with a sentence that should land well on your eyes; The 2013 Monster Energy Supercross season is here. No more bad noise. No more pre-season, off-season, silly season anything. The only subject to Rev Up about for the next 18 weekends is supercross, supercross, SUPERCROSS! It’s already the first Thursday before the gates slam down on the greatest season in history and that verbiage should have the shoulders slammed back. We all have our favorites in both classes and no matter what your fantasy team is, all of them are strong. There is more talent heading our way than we’ve ever witnessed and every heat race and main event is going to burn. We have an entire season to be jacked up about, but there can only be one season opener. Only one “Anaheim 1” to enjoy this Saturday night.

Just think about the Moto City that will be spread out in the pits under the southern California sun. All of the teams lined up with their 2013 flow set on kill. I can’t wait to see the first practice report with pictures and lap times. It doesn’t matter their importance, and for that matter the opening round of the season doesn’t mean a great deal. The only rub to that cliche is the two-time defending champion has owned A1 ... twice consecutively. But, this weekend is about the feeling of the opener. The first time for all of it to arrive before our eyes. Anaheim 1 is pure electric energy. 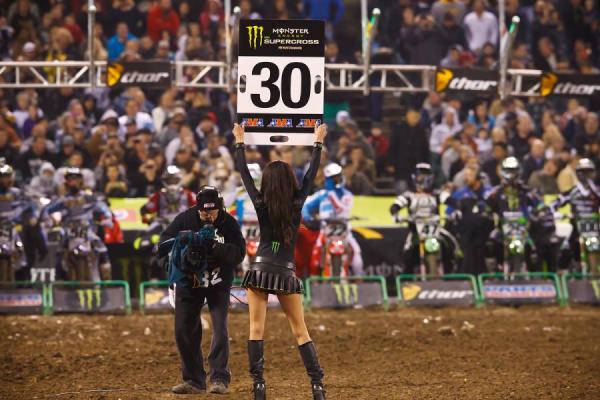 The first gate drop of the 2013 Monster Energy Supercross season is on the horizon.
Simon Cudby photo

The day time activity will quicken the anticipation, but the real juice comes when darkness cloaks the stadium and her seats fill to capacity. It’s a hell of a thing to be inside a packed Anaheim 1. There is nothing like it and no race of the year really gets to that level of chest thumping. Then they shut down the lights everyone goes nuts. All of the hype lets go in a primal frenzy as the horde goes berserk for a few seconds. Credit to Feld and Monster for the opening ceremonies and something tells me they’ve pushed it up to a new level for ‘13.

You ready to see them? Ready to see the boys roll out? Yes, please. I can’t wait to see, hear, and feel the eruption when the first big whip gets cranked off one of the triples. On through opening ceremonies comes the first 30-second board girl of the year, the first crackling and snapping of the bikes on the rev limiter and finally the opening holeshot of the year. The heat races are going to be completely insane. There are going to be big names that don’t make the show a lot this year and this is going to create desperation in the pack. They’ve been getting more ruthless the last couple seasons, and the clean jobs and banzai efforts are going to raise eyebrows during the opening heat races. Then come the first main events of the year, baby! Damn right! Anybody ready for those?! The first ones! Yes, I’m yelling! I’m the biggest geek fan ever, and proud of it. I can’t freaking wait to see the show!

What is it going to be like this year? Wow, every single one of the big names got hurt last year. Including the 450SX champion. We may see things go more smoothly this time around and the recent peak of sprinting beyond self-preservation has hopefully plateaued. The older guys have a better chance of climbing the walls, but I’m not quite sure. It’s too hard to get the job done conservatively in this game. The winner goes psycho from gate drop to checkers. Man, I just hope they pull back the reigns a little because we have such an incredible opportunity to see a points battle like never before. 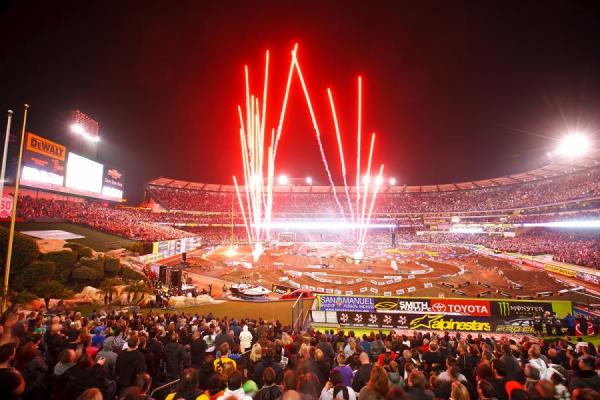 The opening ceremonies at A1 should bring the crowd to a frenzy on Saturday.
Simon Cudby photo

It’s hard to know what to wish for because as fans we want them to go faster, but we don’t want them to go down. The racers fight the same fight. They’re all gnarly. They have what no other motocross riders in the world have and their determination has no rival. The boys give everything and there is no mercy. They're our disposable heroes. They can't help themselves. If any one of the contenders gets his teeth set into the rider he's chasing he'll go for it. That's why they're out there. That's why it's American Supercross.

This time, the special time, the only time of the year it gets to feel like this! Anaheim 1 is here, ladies and gentlemen. Time to see the show.