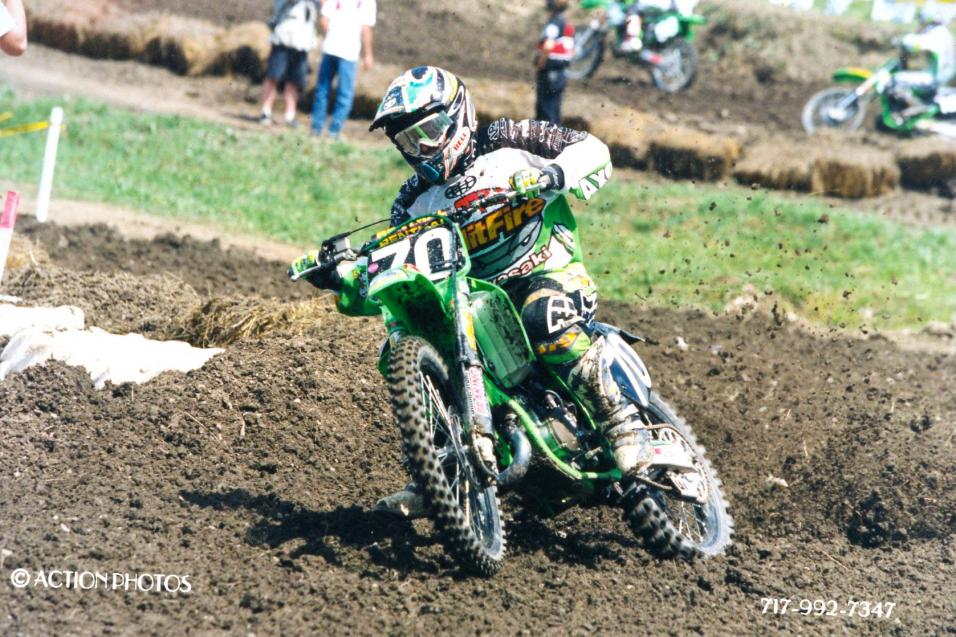 November 29, 2012 9:40am
by: Andy Bowyer
Hello, everyone, and welcome to the Rev Up. Everyone has had those days of riding that will forever stick out to them. It doesn’t matter if it was an epic shred session on a turn track, or training a huge double you and your pals scouted out. Those times stand above all to me. The moments away from the hard laps of practice and racing are important, as well. It’s easy to burn out if you don’t save time for fun. It just so turned out that I had the best weekend on my riding days doing both.


Growing up in Kansas I loved to read the magazines and look at all of the pro’s riding in southern California. Whether it was the MXA guys riding Glen Helen or Perris Raceway, the Dirt Bike guys riding in the desert, or just shots of the pros practicing at the super secret SX test tracks. There simply isn’t anywhere else in the country like that to ride a dirt bike. I was turning pro around 1996 and had planned a trip to pick up my ‘97 bikes from Kawasaki Team Green in Irvine, California. We grew up parking at the amateur nationals beside the Carmichael family so I was fairly close to RC. He was set to join what was then called the Spitfire/Pro Circuit Kawasaki squad and had been spending the winter at his mechanic Chad Watts’ place.

The 30 hour drive from Kansas to California was just a walk in the park and I’ll never forget driving into the parking lot at Kawasaki. Mike Raring (former Team Green manager, and birthday guy TODAY!) met me at the back with a bro hug and quickly wiped his hands off on his pants. Hey, I didn’t stop or shower. Full “trucker” status. Anyways, I couldn’t believe how everything was so clean and just looked better, somehow. The SoCal lifestyle was everything I imagined and more. First off, Watts’ house was the ultimate pimp palace, complete with a sparkling jacked up Chevy Z-71 parked out front. It had rained the day before and I begged him to let me wash it. In truth I just wanted to drive it, and I put the shine to that bad boy like it was mine. 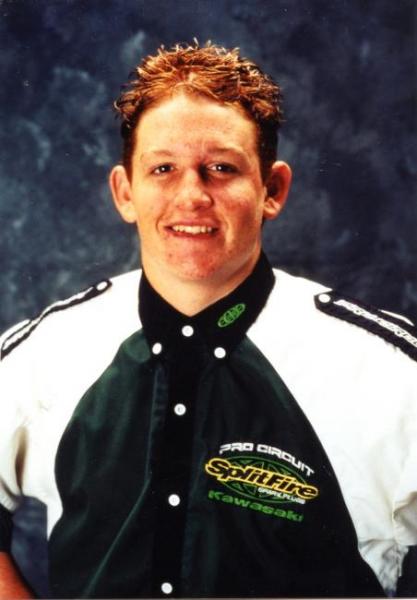 RC circa 1997 during his time with Spitfire/Pro Circuit Kawasaki.
Pro Circuit photo

After meeting up with Ricky, we hit it early because in the morning we were going out to Richie Canyon to ride the moist terrafirma. David Pingree met us in the morning and guided us out to the hills. It was funny, RC was just a kid and new to the team and Ping kind of had a chip on his shoulder with him. Once we got out there to ride it was perfect. Pingree had scouted a dozen floating hip jumps, cliff hits and booters of the like. John Dowd showed up on his factory YZ125 and later on Craig Decker came out and joined in. As we were just gooning around the whole reality hit me like a sledge. I was just sitting with my arms on the bars when RC came ripping over and asked me, “What’s wrong, dude?” Nothing’s wrong at all, man.

You ever have a moment when the other guys go back to gas up and you decide hit the jump a few more times? Always a bad idea, but I couldn’t figure out how Ping was getting so flat off this peaked out hip. I quit hitting it because I looked like a turd, so when nobody was looking I hit it third gear wide and whipped it as hard as I could. I ended up getting bucked into a huge no-footed nac-nac. Way, way, unintentionally. I still don’t know how I didn’t crash but I ended up landing side saddle and softly slid out in the wet grass. It snapped off my clutch lever so when I rode back the guys saw me nervously changing it out. Ping raised a disapproving eye brow at me and asked, “What did you do?” Nothing, man. All good. He stared at me a while then said, “Well, load it up. We’re heading to MC’s house.” 8mm bolts were tightened, gear thrown off, and bike loaded in about three minutes.

There it was. Jeremy “Showtime” McGrath’s famous backyard supercross track. I got out my race bike for this. The track was moist, but wasn’t groomed and had gnarly rain ruts on the landings of the bigger jumps. Didn’t matter, Carmichael and Pingree were doing sprints right away. I joined in, riding completely over my head. I mean, it was my duty to so. McGrath’s house! They lapped me pretty quick and I was winded in about seven laps so I stopped and watched the two go at it full race speed. It was funny, Pingree was faster.

After the session there was still a lot of daylight left so we headed back out into the hills for more fun. That is what was so great about this experience. Just load up and switch venues by the hour. For a Kansas kid, it was moto heaven. Anyways, back out in the canyon we ended up finding this concrete table top. I remembered a cover of Motocross Action with Jim “Hollywood” Holley doing a cross-up over this concrete water drain. I’m not sure if this was the one, but I started riding over it again and again. I was super stoked that the guys were training behind me and throwing little whips. Then I got a little greedy.

There was a huge ravine that followed the concrete table with rocks and crap at the bottom we had to negotiate. I rode off a couple hundred yards and gauged the distance from the take off of the concrete to the other side of the ravine. It was maybe 150 feet, give or take an extra yard or so, because it bent to the right and had to be hit at an extreme angle. Ping rode over to me and gave me that look again and asked, “What are you thinking about?” He gave it a quick glance then coldly told me, “Don’t even think about it.” Ricky had ridden over and David looked at him for support, to which RC shrugged his shoulders. He had seen me hit stuff like this at his track. 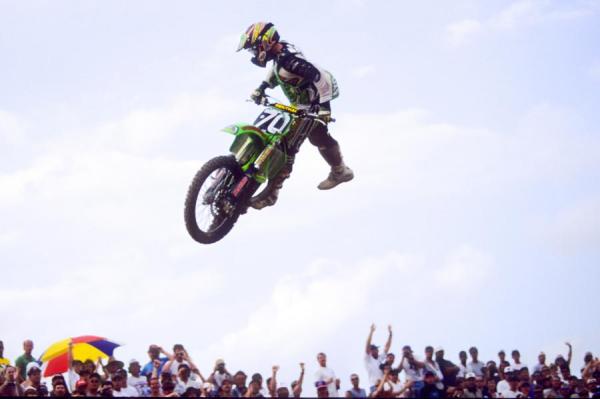 I was already motoring over to the take off for a final observation, then made a practice run. Yup. Had to be 5th gear tapped on a KX125 to make it. It was super sketchy because the approach was wet grass and the takeoff of the concrete was abrupt and short. If you g’d out at the bottom you would catch the top and get bucked. There is a science to the madness. I didn’t care, I was hitting it. With acid in my throat and that wonderful cold chill pulsing through my blood I sent the gap. Guinna pigging a hit like that rarely looks pretty. I was front end high and killed the motor when I stomped the rear brake in a panic. After about three seconds of dead engine silence I slammed down hard, but rolled away and claimed it. RC was almost falling off his bike laughing at me, but he pulled on his goggles and said, “I don’t want to come up short. Were you wide open?” I nodded. His wide open and my wide open were different. I could tell when he was only halfway through the approach. He had speed shifted from the fence line and was literally hanging his ass off the rear fender and pulling for more speed! Seeing this, Pingree looked at me disapprovingly with his arms crossed and said he wasn’t doing it, “no way.” A lightning bolt shot passed us and RC went into orbit. He sailed at least 30 feet past clearing the gap and landed so hard he blew both his short ass legs off the footpegs and whiskey throttled it back under control. Then he goon raced it back to us laughing so hard he couldn’t breathe. Ping just scoffed. As Ricky and I shook out the cobwebs and talked about the hit, we thought David rode back to the truck. Nope. Here he came, going through the gears and hit it. He even threw in a little whip and landed perfectly.

I remember hanging out later that evening and feeling like I was on another planet watching how the guys ate, worked out at the gym, and generally organized their stuff. Everything was new and clean from their garages, to their kitchens, to their shoes lined up perfectly in their closets. As sharp as everything was they were still crazy as hell. Pingree invited me to go on a night run on the Z50's. There we were hauling ass through the nicest neighborhood I'd ever been in. Jumping sidewalk table tops, and railing over grass terraces like Mad Max the movie. We found a playground with that wood chip mulch and carved out the sweetest berm track ever. Pouring sweat and laughing our faces off until the gas ran out. I never thought that day would end and I didn't want it to. It was one of thousands those guys would go on to enjoy, and much more. For me it was just that day about 15 years ago and about this very week in the year. It was a dream day and my dream ride.