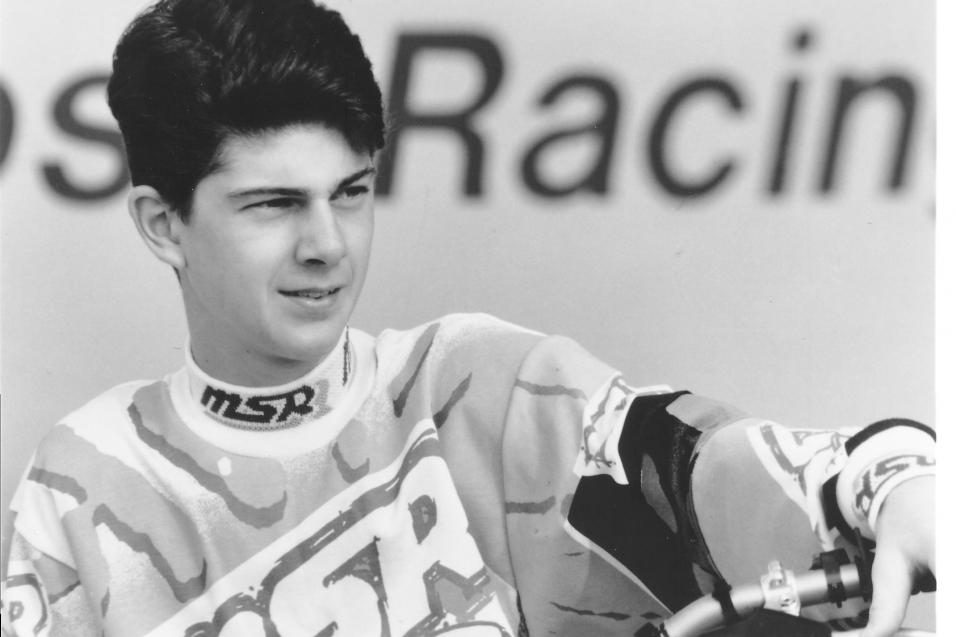 Yogi! One of the flat-out fastest riders of his generation, Georgia's Ezra Lusk signed a factory Suzuki deal as an amateur, than burst onto the professional racing scene in 1992. Over his twelve years of racing, Lusk delivered over 15 wins at the highest level, as well a 1994 125 East Supercross Championship. More than the stats, though, Lusk is remembered for how he raced. His speed and aggression carried him to wins against the likes of Jeremy McGrath, Ricky Carmichael and Chad Reed, no easy feat. Lusk retired at the end of the 2004 season and pretty much disappeared until 2009, when he made a brief comeback for the U.S. Open, and showed the world he still had some speed. But after that one-race comeback, Lusk went back into retirement. Occasionally, you'll see him in the background at the races, helping Davi Millsaps. To get in-depth with Ezra post-career, we gave him a call.

What are you doing at Milestone? I thought you were retired?
I am! But, about two years ago, I started helping out Davi Millsaps on a pretty low key level. I was just being a little bit of a mentor and trying to guide him through some of the challenges that these racers face. I was drawing on the things that I did and learned when I was racing, and things that I wish I had known more about.

That’s cool. So would you say you are coaching him?
Well, yes and no. It all started a few years back, and with Brock Sellards. Sellards was still racing arenacross back then and he would come and stay with me and train. Davi lived right around the corner, and we used to go over and ride with him. I started talking with him and helping out, and we've been working together for two years now in an official capacity. So, right now, we are out in California, and he is here for testing. His Rockstar team has just built a private test track here at Milestone, and we are just working on the bike. But as it goes, I never really got back into the whole racing scene after I quit. You know, the traveling and all that. I would much rather not travel so much, but I wanted to try and help him make some good decisions and make the most of his career while he still can. A lot of the things he went through, I went through. I had that soft feeling in my heart for him and some of the stuff he was working through. I wanted to see if things could end up differently for him. 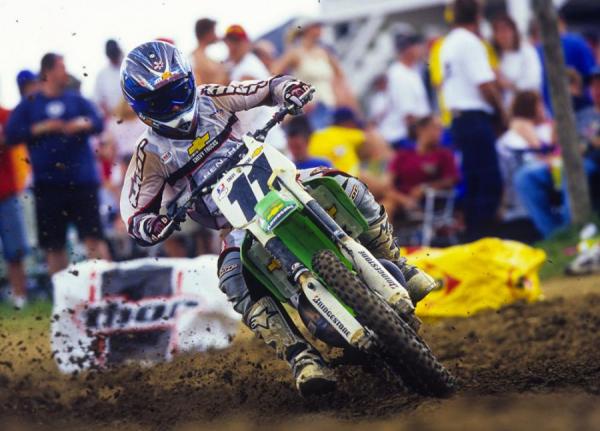 Ezra Lusk retired at the end of the 2004 season.
Simon Cudby photo

This interview is more about you, but how are things going for Davi? I know it's early on, but can you give us an idea of how he is doing with the new bike?
Well, it's not really my place to say, but I think it is going well from what I can see. They [the team] are only working with one 450 guy, and thus they are devoting their full attention to him, and I think that will be really good as far getting the bike to its full potential.  The biggest thing is the riding, trying to get him to consider himself a contender. Going into this season is really his best chance. With this new Rockstar effort and the Suzuki, we are really excited. We can start out fresh, and everything is centered around him. There's lots of work to do, but the guys are coming out swinging.

I think Troy Adamitis' series The Moto: Inside the Outdoors has really put a spotlight on some of the issues and challenges that these riders can face, which often come down to family and financial issues. Have you seen the shows, and what is your take on it, having been through some of these things yourself?
I have not seen the shows yet, but I have heard about them. It's really not my place to say anything about Davi specifically. But I will say this - every racer at some point or another has a big challenge going from amateur to pro, and then if they make it, the challenge of trying to balance out the family, then finding a girlfriend, getting married, and having kids. It can be really, really hard to separate the family from racing, all the while trying to find that balance - and then getting the results, which is most important.  It's already a bummer enough about how harsh this sport is.

As for me, I have always been honest about things. My situation was comparable to some of those stories, but not all of them. I think it's kind of bad, frankly. It casts a sour taste about turning pro and all of that. But I also should note – and you can't forget it - it is television, and the goal of the show is to get people to watch it.  For me, going and getting involved in tennis was similar. I had idols that I saw on the tennis channel, and eventually played adult league tennis, it was low level compared to pro stuff, but I took it seriously. If kids today can see the show, bad or good, then it's good either way. You can live and learn from my mistakes - or Josh Grant's, or Davi's or any other professional athlete.

Getting back to you, whats happening your life outside your gig with Davi?
Well, everything is good! I retired in 2004 after my brother got hurt really badly. When I stopped racing back then, I never really made a clear “that’s the end” statement in my head, but after spending a year helping to get [my brother] back in shape, I just never really got back into it. I really didn’t do much for year, just hung out with my brother trying to get him better and hitting the gym with him down in Georgia. I then started playing a lot of tennis and really just moved away from the racing. At that time, 2006 or so, Brock Sellards was still racing, and he would come down to my place and we would still ride a lot, but it was just for fun for me. But for the most part, I was just playing tennis and my interest went other places. 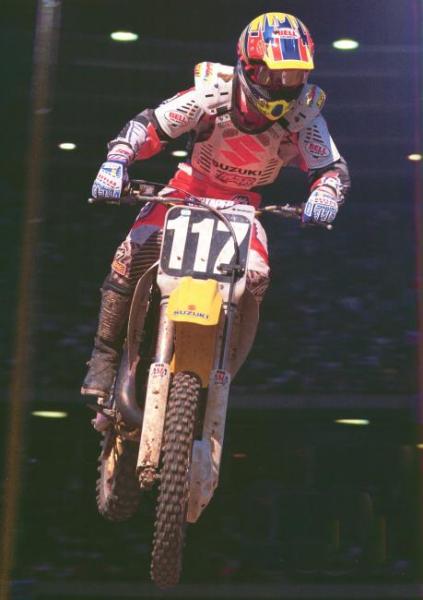 How is your brother Shane doing now and what is he up to?
Oh, thanks for asking. He is doing really good. He is actually walking around, and doing well. He just started school at Nova down in Jacksonville, where he is finishing up to become a physician's assistant. He really has it going on, and I think he got the brains of the family. He also got his bachelor's degree in public health and a master's in biological science.

What was the state of his injury?
He is considered a quadriplegic. But he has recovered pretty well. He walks with one arm crutch, but he gets around good, considering where he was at when it happened.

That’s a cool story. One of these days I would like to look him up as well, as that is a whole separate story. Talk to me about your comeback back in 2009, and how that went down?
Well, Brock and I would sometimes head over and ride with Davi as well, since he lived pretty close to me in Georgia. I was just having fun doing that and it was real low key. We were just riding and not doing anything serious. But then in 2008 my wife bought me a bike, and my brother was well on the road to recovery. Even at that point, I never really thought about racing again, but Sellards was doing well with his arenacross deal. That is what got it started.  Arenacross is low key, and you don’t have to do the full blown supercross training for it.

So I did make an attempt at a comeback in 2009, but it didn’t go that far. It was one of those things where I really enjoyed what I did to prepare, but it was a different story when you go racing. There's the challenge of staying healthy. I realized that is the part I didn’t want to do, and that is the most important part. I had been training a lot back then, and did a half Ironman, I did a marathon, and was just keeping myself fit and doing the parts of the deal that really I enjoyed. And I was not doing the parts that I didn’t like! But, it wasn’t a big deal. After trying it once, I decided after that race that I wasn’t really feeling it. I had also jammed my wrist again, and I already had a lot issues with that wrist over the years. So that’s it.

Totally understandable. It can be a grind, and training and racing are very different things.
Yes. But you know, you really kind of forget what these guys go through day in and day out, and I just didn’t really want to have to do that again. It was a lot of fun to be back on the bike, but putting in the work during the week that it requires to stay on the top level is very tough. Even for arenacross! 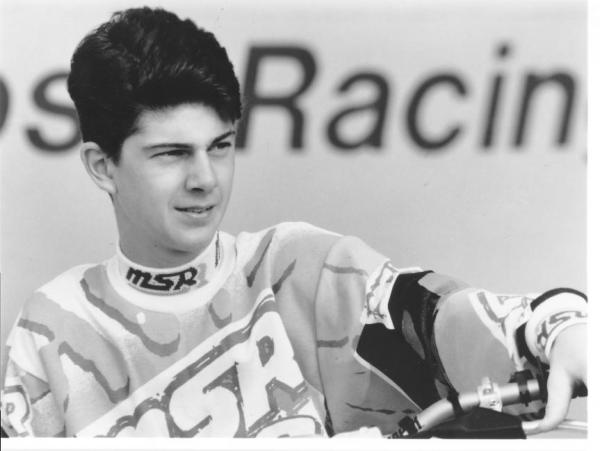 What is your fondest memory in racing?
Well, just basically being at that very top level, and racing with those guys. When you look back, I was part of that time, I was racing Jeremy, the greatest racer of all-time, and I was a threat to win races and titles. I guess I am just excited to have been part of that whole era. Jeremy and I had some heated battles and we didn’t like each other for along time, man, but I have nothing but respect for him now. He is awesome.

Tell me about your personal life. Where are you living, and how are your kids doing?
Well, Jennifer and I are still together and she is great. We got engaged in 1999, back in Paris when I was there for the supercross. We recently moved up to Cartersville, Georgia, which is close to Atlanta, but prior to that we were living down in southern Georgia. Haydon was born in 2003, the week after my last win Phoenix. That was the one where I had that battle with Chad. That was a good week in my life! He is now nine-years old, plays tennis, baseball and does it all. Then we have Hudson who is four-years old. Neither of them are focused on one sport. It's all good. We come and go a lot, and we don’t sit home much.

Okay, I have taken enough of your time. Hey, one last question – how is that weekday crowd at Milestone? Any crazy fans out there? I have heard some stories about that place.
Oh boy, I think I know what you are talking about. We are lucky our new track is off to the side and behind a chain fence, so not too many people come back here. We have had no issues!