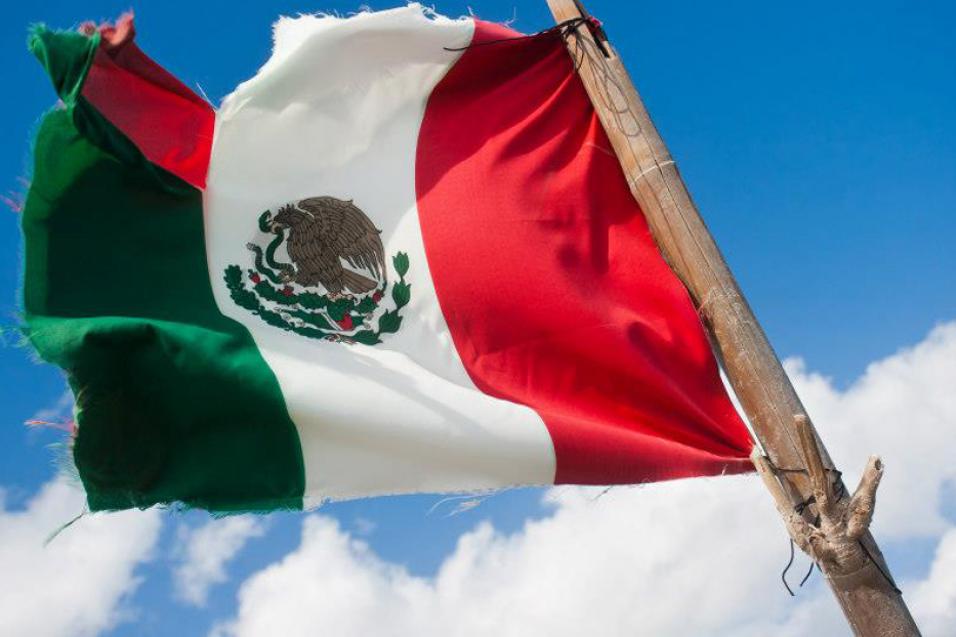 Ernest Hemingway once said: “It is good to have an end to journey toward; but it is the journey that matters, in the end.” I just finished up a week of riding in Cozumel, Mexico, and that quote rang true, somehow, in a multitude of languages. Racer X Illustrated Manager Editor Andrew Fredrickson, The Racing Paper’s Jordan Roberts and myself (Content Manager for this site) were 48 hours into our “assignment”, yet I felt like I’d yet to leave the comfort of home. We were wrapped in a multitude of unique and diverse cultures, yet the feeling of camaraderie was at an all-time high.

Although Cozumel has seen a boom in tourism and development, the majority of the 34 mile long island still features a vast amount of untouched jungle and shoreline. Tucked away on the northern end of the island, sits Motopark Cozumel--a sandy motocross track built on the foundation of an existing rock quarry. 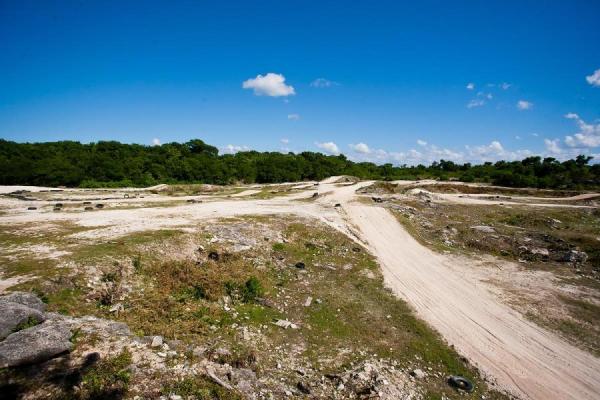 Jarda Dana Kovky Kovar (aka Kovky), a native of the Czech Republic, and Chris Wright, a Michigan native, would serve as our tour guides for the week. Kovky owns Motopark Cozumel and Wright owns Cozumel Extreme, and this tour and track combo would show us everything Mexico's largest inhabited island had to offer. But this was day two, and, battered and bruised from our first full day of riding, beers were flowing faster than a Rocky Mountain stream, thus making the distinct language and cultural barriers seem nonexistent. Kovky, whose thick old-Russia accent bleeds through his massive 6’3 frame, churned out vivid stories of his racing travels, while Carlos, a Mexico native, whose vibrant personality is more contagious than the flu, laughed with his friends in the background—about what, I’m not sure, because they rattled off stories in Spanish.

As I threw back my third Tecate, I shared stories with Victor. His journey from his childhood in Mexico, to his time spent in America, and then back, would have made the manliest of men excuse themselves with, “That's just dust in my eye—I'm not tearing up.” Victor has been in Cozumel almost a year and helps with track maintenance—which includes everything from watering the track constantly in hopes of keeping it moist under the extreme Mexican heat, to chopping through the thick jungle with his machete to complete the track's first major overhaul. 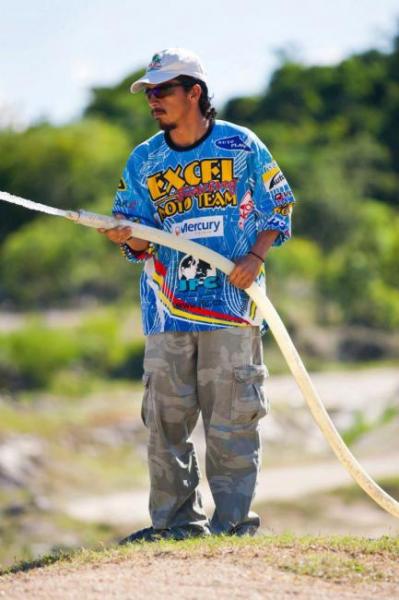 Victor (pictured above) is in charge of track maintenance.
Andrew Fredrickson photo

The following day had us on an all-day snorkeling/drinking excursion with a guy named Tiger, which made me never want to hear the word Tequila again. We managed to wake from our slumber and then dragged ourselves onto the track for another day of riding the following day—stopping in almost every corner, trying to keep the previous night's festivities in our stomachs. Then I met Gener. Although his limited English matched my pretty much nonexistent Spanish, we quickly bonded over a pair of tinted 100% goggles I lent him after watching him toss on a pair of shades under his goggles to keep the bright sun from striking his eyes! Gener was an off-road specialist that spent most of his time riding the miles of trails that surround the small island (and we'd eventually go out there with him, which turned out to be just as crazy as you'd expect). 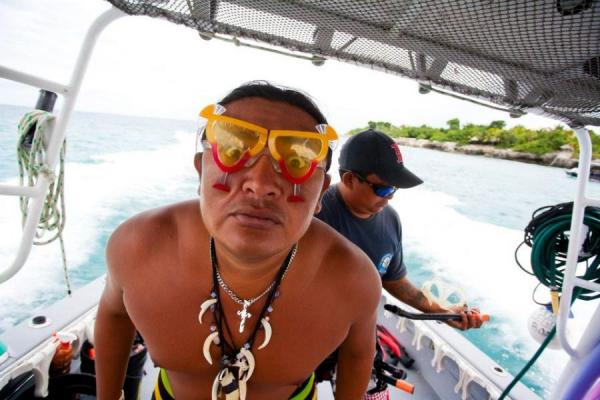 If you ever visit Cozumel, make sure to take a trip with Tiger (pictured above).
Andrew Fredrickson photo

Over the course of another round of post-moto beers (forget stereotypical things like Mexican jumping beans or Pinatas—the post-day brew seemed like the most common feature of life down there from my perspective) Gener and I talked about everything from tattoos, to work, to motocross. We could barely find enough words to speak, but quickly formed a lasting friendship.

The stories and friendships I formed from a week in Mexico could fill up a bottomless pit—but we'll try to throw in as much stuff as we can when Jordan Roberts pens a story in an up-coming issue of Racer X Illustrated. You'll find out why, in fact, the Mexican Army even had to get involved in our trail ride. 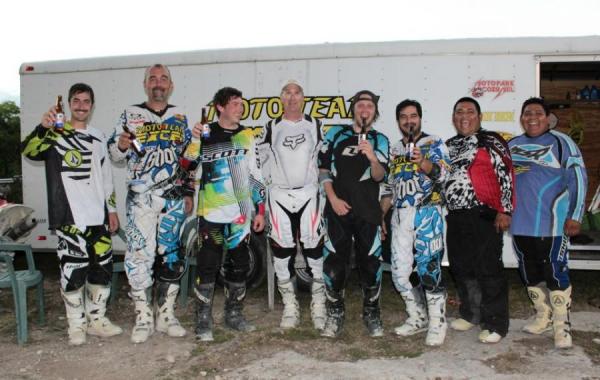 After moto brews is a must in Mexico.

But you see, this isn’t a story about the wild partying we did or our crazy trail ride through the Mexican jungle or our exhilarating scuba diving trip with a guy named Monkey. It’s about the journey, and the newfound friendships that come with it. Because the passion for motocross remains the same—no matter the language or culture. 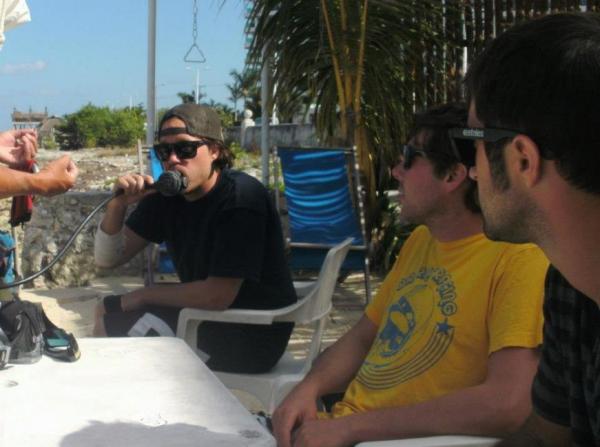 Getting ready for our scuba diving trip with Monkey.
Chris Wright photo

A special thanks to Kovky, Chris, Carlos, Victor, Gener, Tiger, Monkey and everyone else who made our visit to Cozumel one that I will never forget. Make sure to visit www.cozumelextreme.com to learn more about Cozumel Extreme and visit MotoPark Cozumel's Facebook Page and plan your own motocross adventure in paradise. Also, check out Andrew Fredrickson’s gallery for photos from our adventures. 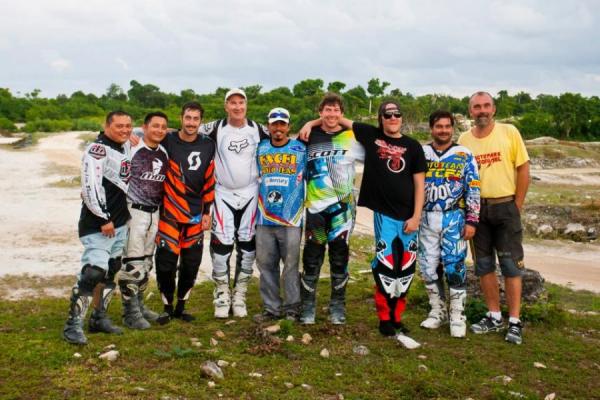 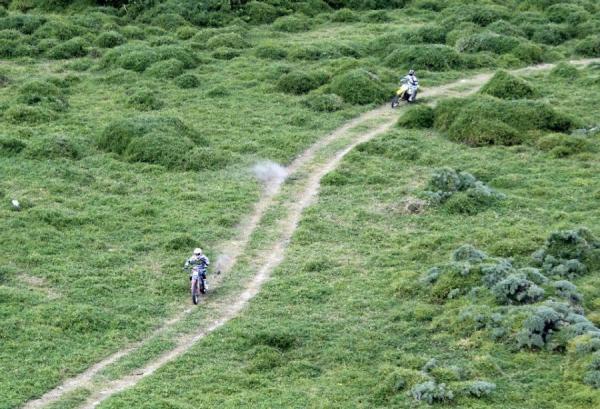 Make sure to read about our time on the Mexican trails (pictured above) in an up-coming issue of Racer X Illustrated.
Chris Wright photo