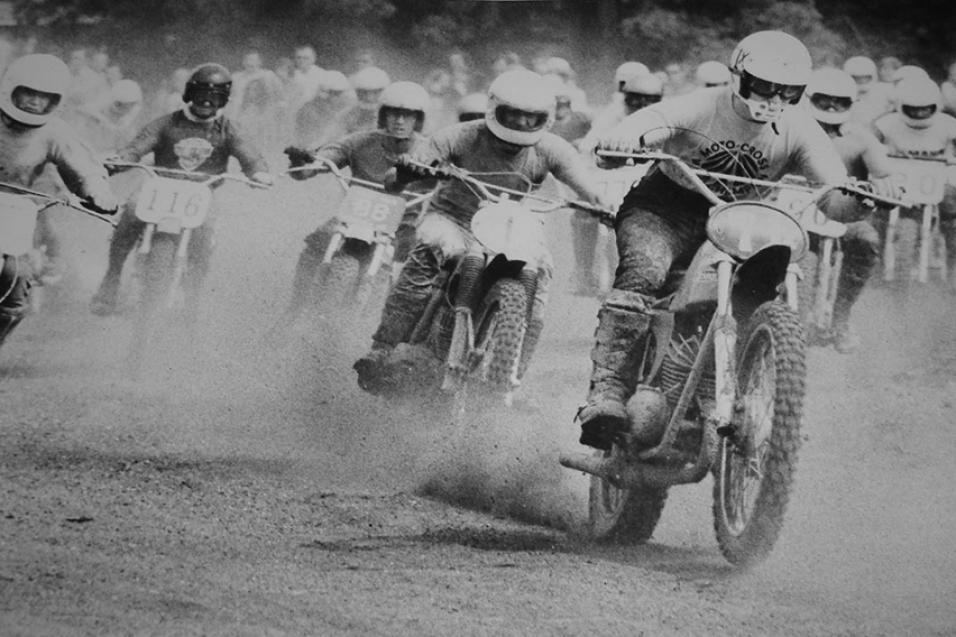 Advertisement | Advertise with Us
It's always fun chatting with some of the great characters of this sport, those who live behind the scenes but can bench race with the best of them. For this Between the Motos, we chat up an old Southern Boy named Steve Lewis, who has spent his life racing and riding, and used his engineering and machine shop skills to develop Roll-On Throttles. But that's just a side project for Steve—dirt bike riding or any kind is really his life. Here's the laid-back nice guy from South Carolina.

Racer X: Steve, they tell me you've been at this a long time. I don't know where we even start.
Steve Lewis:
[Laughs] Well, I've always raced, motocross has always been a passion for me. I go way back, into the early days, but my best success was probably at Loretta Lynn's. I was able to figure out the formula down there and grabbed quite a few titles—I have six, which at the time put me pretty high up there in the rankings. I've also worked a regular job, I spent 36 years working as what you could call an affiliate with Michelin tires, and building machines and industrial equipment that can help them. Because of the Michelin deal, the career worked out very well for me, but now I'm retiring.

More time to focus on the moto stuff now!
Right! I could just sit around, but this is what I love. I'll have some more time to dedicate to Roll On Throttles. I've always tried to come up with things for my bikes. Then in 1998, Yamaha came out with something called the YZ400F. And of course I had to have one. And anyone who had one knows those four-strokes were beasts. The throttle was like a light switch, it had so much torque coming out of a corner, but if you ran out of revs on the face of a jump, you know what happens: Everything goes down! So I had to find a way to control that bike, and I started experimenting with throttles. I ended up making some rather crude stuff, and it was the precursor to the Uni-Pro we have now. The concept is, it starts slow at half throttle or so, but then gets faster in the second half. Along the way, very quickly, the kids would say, “No, no, I just want one that opens it faster!” So now we offer both types, but I've always said that slower might be faster! 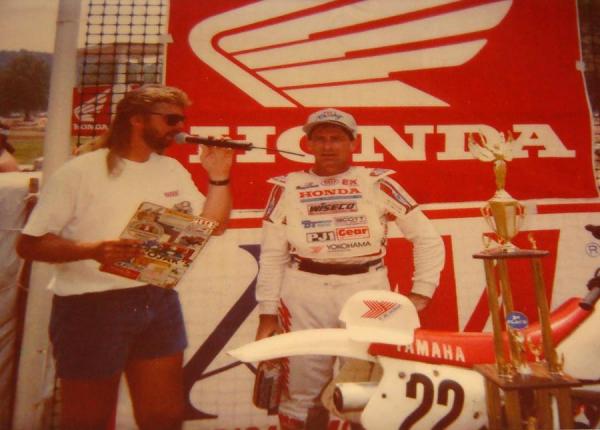 Steve on the podium in 1989, when he scored his first title at Loretta's.
Photo courtesy of Steve Lewis

Well, on the outside people think of four-strokes as having broad power bands, and you don't have to shift them as much, things like that. But your experience shows these throttles helps.
Well, my experience is, with the kind of power these bikes make today, smooth throttle delivery, ala Mr. Kevin Windham, helps you ride faster. Now, the fast turn throttle is good for reactions off the gate. Our Lighting Throttle will get you a wheel length off the gate—you've seen a lot of gate drops, how many riders have their right elbow all the way down coming off the gate? Most riders don't regrip right off the line, so we sell a lot of Lightnings. We do pretty well with it in supercross, and I don't know how the heck those guys hold onto those bikes in supercross whoops with quick turn throttles, but they do. All of the guys have their own version of this. Pro Circuit runs them, James Stewart runs them, not our product but things that work like it. They have their own versions, so don't even mess with those guys. But most people would benefit from this type of product, not just the pros, so we say, if you break the throttle on your bike, switch to ours, it's unbreakable, and you'll gain some performance while you're at it.

Yeah your throttle is plastic, most are billet. Explain how you came up with that.
It's a funny story. When I first started this project, I was down at Randy Hawkins' house, and I told him to try this throttle. First thing he said was, “Is it aluminum? Because if it is I can't use it. Aluminum doesn't work in the mud.” And you know what? He's right! So I had to come up with something else. Through my industrial experience, I came up with a plastic that is basically the hardest plastic you can find, it is even used for bearings and for friction surfaces in industrial applications. When you try to drill it or machine it, it doesn't come off in pieces, it comes off in one long string. A lot of people say, “Yuck, this is plastic, it can't work.” But it's not like stock plastic. I've told factory guys to just beat on these with a hammer, and you'll see it just sits there and looks at you like, “Okay, that's all you've got?” If you beat on an aluminum throttle, the shape will deform.

How did you get this experience in engineering?
My main job is a machine and process design engineer. Right out of high school, I went to college, mechanical engineering, then I got the wife and two kids, so I had to get the real job! 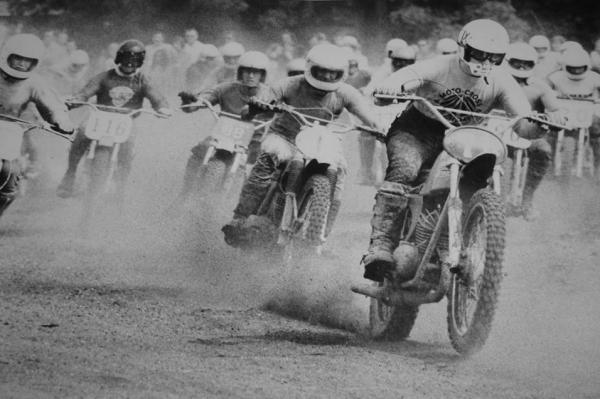 Steve, on a Rickman, scores a holeshot in 1971.
Photo courtesy of Steve Lewis

But you've always raced.
I managed to keep riding and racing through all of that—but that was a long time ago! This was late 1960s, early 1970s, it was a family atmosphere even at the pro level. Tony D would be the guy, and we'd still all be out having fun together and then go out and race. But then it started to evolve, and it's evolved into a thing now that's wonderful, but it's definitely tough on the kids, it's so serious for them now.

So even though Roll On is a business, it's never been your main work?
No, I do this because I love it! I still ride, I'm 63 and have 25 percent of my back fused, and I have a few miles of trails right out the back of my shop, and I ride all the time. I can't do motocross anymore, but I'll never stop riding completely. And Roll On is my way of staying involved in it at every level. I'm funded for retirement through my regular job, I do this because I just like being involved. I get to talk to guys like you. I get to talk to this guy in Sweden who sends me 20 pictures of him riding in the nastiest mud you've ever seen, and I try to help him.  I'll take that passion to my grave. Engineering and machining is like that with me, too, running the CAD systems and things like that. This is fun to me. Now, racing was dead serious, that was different. We had the family atmosphere like I said, but on the track, we were gonna' slam, just like Ryno and Preston last week at that Vet race! For me, Loretta's was always the big focus of my whole year. Two weeks after Loretta's, you'd be back on the bike training for Loretta's the next year.

Hey, back to your throttles here. I think what most people think is, different throttles can make the power come on slower or faster. But it sounds like these can actually do a little of each.
The Lightning is the fastest throttle you can get inside that housing. So for bikes like the last two year's Honda 450F, which were a bit of a dog, it just perks it up. Doesn't change the powerband, just gives you quicker response. Kawasaki just changed their throttle linkage ratios on their new bikes to do the same thing. Then we have a throttle called TC3 which gives you a little more roll-on control off idle, then comes on faster like the Lightning. It's kinda' like having that Kevin Windham throttle control bolted into your brain. Then we have the Uni-Pro version that you can adjust to work anyway you want. It can be as fast at the Lightning, or so slow where you would need to twist the throttle twice just to get full throttle. You decide how much slow you have and when it switches to the faster response. As soon as you turn the throttle you'll feel the difference. But most guys, they just want the Lightning. Faster is better, they say! And I don't care, I'll give 'em whatever they want. I just love being involved and working with guys to come up with new ideas. Here I go again, I can talk forever.

Hey, so can I, so maybe we should just agree right here to stop before this gets out of control.
[Laughs] Okay Jason. Nice talking to you, see you around. 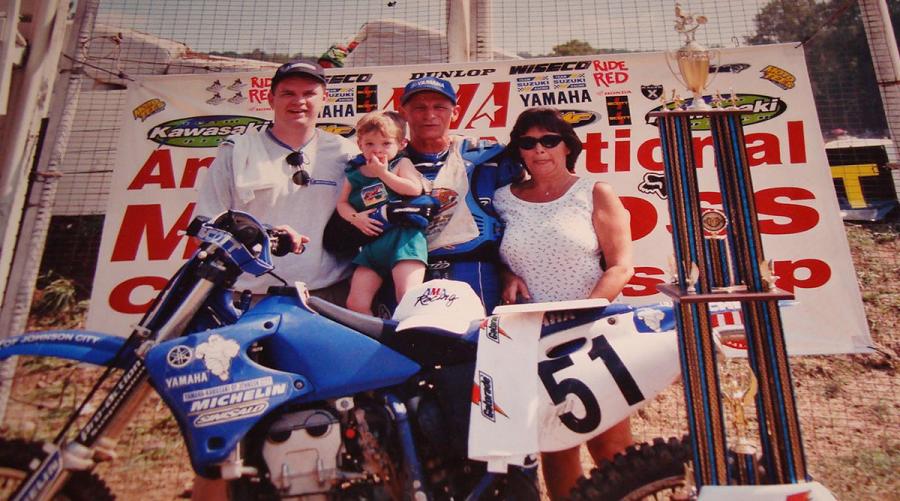