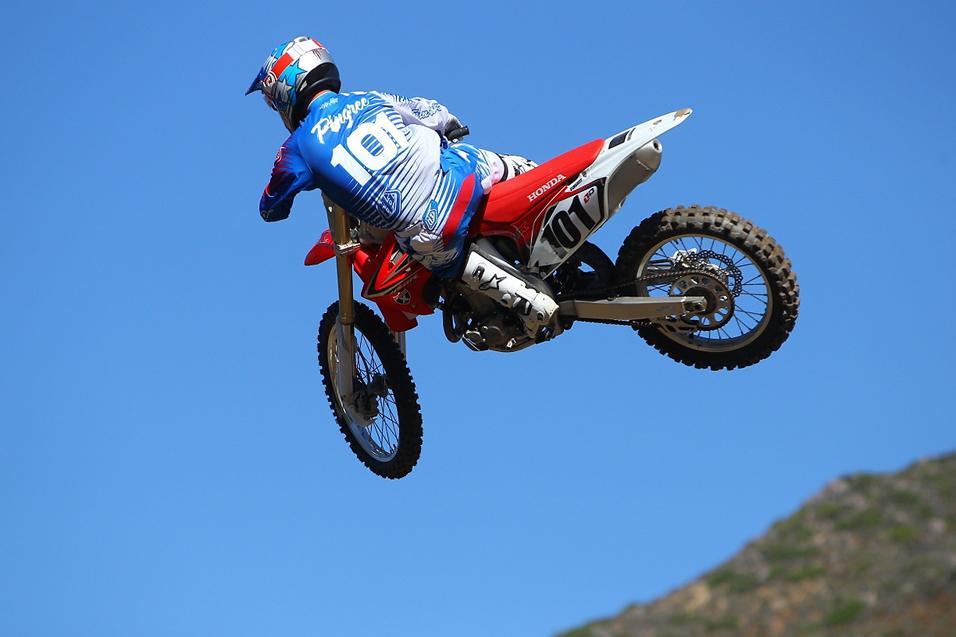 You may not recall (understandable) but I inquired about the use of the number 00 a while back and the letter was published in Ask Ping. Just wanted to say thanks for answering the email and also way to make 00 happen with the 2013 250 shootout! I just saw it on twitter and about passed out from the overwhelming joy. In addition, the XR and the quad have been parked for a bit, I recently acquired a slightly used CRF250 that I have been putting laps on every chance I get, trying to make the transition to bikes finally. Keep up the good work, man, and thanks again.

It takes a real man to rock the double zeros.

Just another fine example of how Ask Ping delivers as a media entity. You want the number 00 injected into the world of motocross? You got it. The AMA may not recognize it but I damn sure do. And way to follow up a great idea by parking your quad and the purchasing a new dirt bike. You are an outstanding American.

David, I was watching the AMA superbike races when the announcer said something that made me wonder. He stated that the two racers who battled for the win may be ready for the World GP stage. Why in motocross is the AMA the premier series in the world, but it is quite the opposite in road racing? By the way, I remember going out to Denny’s with you and your dad after the races at Thrasherland. We always liked to claim you as an AZ. guy. Hope all is well.

That's what I'm talking about!

Kyle, It’s always good to see a familiar name from the past. Some of my best racing memories are the local events and amateur races my dad and I went to when I was a kid. Thrasherland was pretty much a pile, looking back, but we always had a great time going there… and hitting Denny’s for some Moons Over My Hammy afterwards. Good stuff. The roadracing thing isn’t my area of expertise so I won’t blow a bunch of smoke up your ass and pretend I know why we lag in that sport. In motocross the Americans figured out how to one-up the rest of the world and become the premier racing series globally. I think supercross has had something to do with that. But our road racing series isn’t even the second largest tour in that realm and we only get a rare few individuals who make it to the Moto GP circuit. Maybe some of those with some worn out knee pucks can give us their thoughts in the comments section. In the meantime I’m a huge fan of the few Yanks we have doing their thing against the best road racers on the planet. Great to hear from you, Kyle.

Good afternoon, David, I look forward to your column each and every week and really enjoy your take on life. I have asked you a couple of questions before without a reply, but anyhoo. What I would really like to know is on a scale of 1 to 10 how upset are you that the USA didn’t win the des Nations and what are your thoughts on the team's performance. The deafening silence in your Racerhead piece definitely had me wondering. My tag on the comments section is YOUNGBLOOD42 and I can’t remember there ever being such excitement before or after this iconic event. My first Motocross and Trophee des Nations was in 1981 and I still have Motocross Action from that year reporting the event. Thanks

No, no, don't eat that! What is this, your first win or something?

Gavin, I’m at an 11.5 over the Des Nations debacle and do you want to know why? Because I was all set to get a big bonus check if our guys won and now I have no idea how I’m going to pay for this giraffe-skin sectional sofa that I just bought off the Internet from an underground poaching/furniture emporium out of South Africa. How am I going to raise that kind of money now, Gavin? Okay, so I didn’t have a bonus program. Actually, I had very little invested in that project. To be completely honest my rage on a 1 to 10 scale is probably hovering at around a 0.5 to 0.8. It took going to a track so unimaginably deep and rough that simply negotiating it is a death-defying feat for someone to unseat the USA as the global champions. It took eight years. I could tell you that the sun shines on a dog’s rear end on some days and cheapen the German’s victory but I’m not going to do that. Roczen rode like a beast and so did his teammates and all of the Dutch crew. Good for them and congratulations. Enjoy the sweet taste of champagne because next year when the track isn’t made of a bottomless pit of beach sand it’s going to be a little more difficult to top the US.