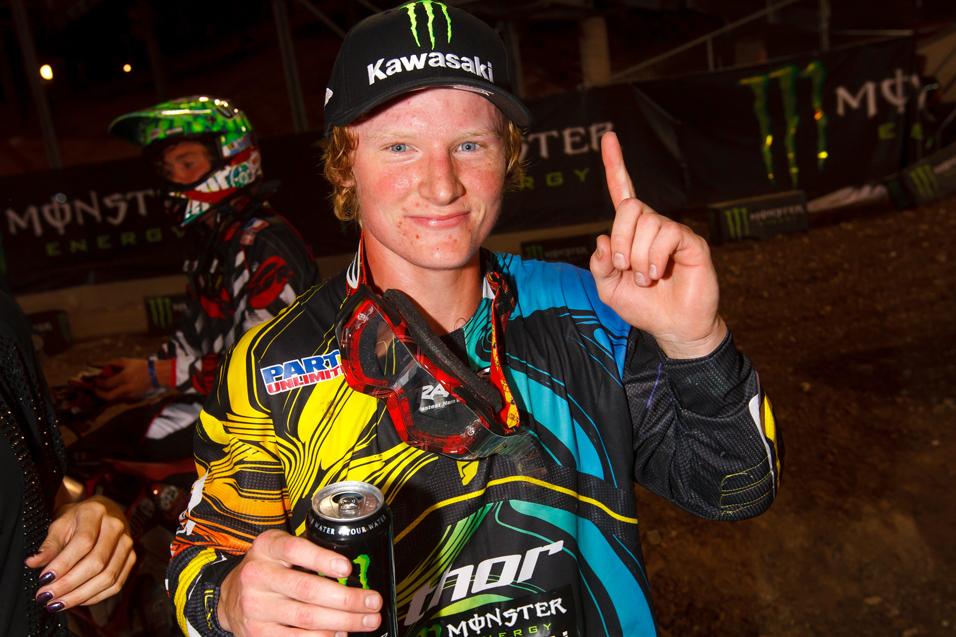 You'd think Monster Energy Pro Circuit Kawasaki's two available spots for 2013 would be the most coveted in the sport, but a whole lot of teams have already locked up a whole lot of talent. So in comes two surprising picks for the new year, amateur grad Justin Hill and veteran Martin Davalos. Here's what our crew thinks, be sure to leave your thoughts below.

Chase Stallo -- Brother of a VurbMoto.com dude (So he follows amateur stuff)

I really like this move … if it were for the 2014 season. Justin, the younger brother of Josh, rose to prominence in 2011—winning the 250 B Stock title at Loretta’s and following it up with a win at the Monster Energy Cup in the Amateur All-Star Class, before making his A Class debut at the Mini O’s in November. Although he was solid in his A debut—5th and 8th in MX and 2nd and 11th in SX—he was outmanned by the likes of Zach Bell, Jessy Nelson, Jeremy Martin, Dillian Epstein and others.

But herein is where I see the problem really lying. Hill tore his ACL this March at the Thor Spring National at Millcreek and missed the entire 2012 season. Meaning he wasn’t able to test himself against the likes of Martin, Bell, Epstein, Vann Martin, and Nelson. There’s no question as to Hill’s talent, but I think he would have benefited from another year in the amateur ranks.

Luckily for Hill he’s going to a great program that will groom him for the future and he won’t have the pressure to win immediately. But looking at this from Pro Circuit’s view, you have to wonder why they didn’t stash Hill in the amateur ranks for another year and bring in a young rider like Cole Thompson or Kyle Peters, or maybe a veteran like Phil Nicoletti, to pair with Hill in the future. They are going to lose Baggett, Durham and Davalos to the 450 Class within the next year or two—or maybe Davalos will try and stay in the Lites Class forever—and if Hill for one reason or another doesn’t pan out they will be searching for new talent again.

Although Pro Circuit has Adam Cianciarulo locked in, GEICO Honda just made another power move with the signing of Matt Bisceliga and Jordon Smith and Star-Valli already has Copper Webb on the books. And let’s not forget that JDR J-Star KTM is making a play in the amateur ranks as well with their recent signing of Zach’s brother, Chase.

At the end of the day it’s hard to argue with any move that Mitch Payton makes, seeing as he’s the most successful team manager in 250 Class history, but after losing out on Jason Anderson and Marvin Musquin this screams of a apprehensive move that was made a year too early.

Jason Weigandt -- Actually made a phone call to research this story, and he's proud of that.

You ever see on video games where you have a ghost rider turning in a perfect lap, and you try to match up? You can do it on Mad Skills Motocross, for example, and that's kind of what Justin Hill is doing. He ended his B class career right near the front of the pack (in '11), but missed most of this season with a torn ACL suffered in March. Meanwhile, Zach Bell and Jeremy Martin grabbed the headlines, the hype, and pro national experience. Poor Justin, meanwhile, fell off the radar.

Not with Kawasaki, though. Team Green figures that if Hill was matching up with Martin and Bell a year ago, he would have matched up well with them again in 2012 in the A class. So, he gets a shot at the best team in the business, with assumptions that he has the talent to match.

It's a curious move, really, because most will say Hill doesn't have the amateur record to justify such a great ride. However, the Monster Energy Pro Circuit Kawasaki team seems able to sprinkle the magic dust, and they make riders do great things. Team Green Team Manager Ryan Holliday tells me Pro Circuit's situation was similar to one at the end of 2009, when they had one pro spot available, and two great amateurs in Blake Baggett and Dean Wilson. They went with Wilson, and he delivered. Later, they got Baggett, and he delivered, too.

This year the decision came down to Dillan Epstein and Hill, and they went with Hill. I have to say, Pro Circuit hasn't had a huge swing and miss in a long time, so based on that alone, you have to expect Team Green's faith in Justin Hill will pay off.

The news is out: Justin Hill, younger brother of Josh, has been signed to Monster Pro Circuit Kawasaki for next year. I don’t know too much about him other than he rode great at the Monster Energy Cup last year. But if he’s a fast amateur and on PC, he’s going to be very good. The team, the bikes and the situation almost dictate success. Let’s just hope he can put the injury to his knee behind him.

So yeah, good job on that signing. But I’ve got to wonder (along with a lot of other people I talk to) what team owner Mitch Payton saw in Martin Davalos. Look, there’s no doubt that the ex-Star Yamaha, ex-Rockstar Suzuki, ex-KTM 250 rider is very talented judging by his practice times, his heat race wins and watching him ride, you can see that Davalos has serious skills. Yet year in and year out, going on eight years now, Martin hasn’t been able to win a race and only had a handful of podiums to go along with the high dollar, more than capable machinery he’s been handed out. Crashes and not being in shape enough have haunted Davalos more than a few times and I’m just not sure the stripes on the zebra can change.

Look, Payton’s smarter than me and knows what he’s doing and if there’s any team out there that can make this thing called “The Davalos Experiment” work, it would be on Pro Circuit. But I just don’t think it can or will. See Hansen, Josh, for more details on how great situations/bikes/crew/sponsors just aren’t enough to overcome someone that, for whatever reason, just can’t pull through.

Maybe I’ll eat crow on this signing and I’m certainly not too big of a guy to issue an apology if I’m wrong. But for now, I wonder what it is that Payton sees in Davalos that I, all the other teams he’s been on, other industry people and a whole bunch of fans do not.

This should be interesting.

The rules of the game have changed in recent years as everyone has taken aim at the most vaunted team in SX/MX, Monster Energy Pro Circuit Kawasaki. After just a few years of success in 125cc racing back in the early '90s against actual factory teams, Mitch Payton's team began having the pick of the litter every year, and Payton himself was very smart with his choices, plucking guys like the young Ricky Carmichael or Ryan Villopoto right off of 85s, or importing world champions like Mickael Pichon, Christophe Pourcel and Tyla Rattray. And he even knew a good mid-career bargain when he saw one, grabbing guys like Grant Langston and Ivan Tedesco when they ended up on the free-agent market.

Now both GEICO Honda and Red Bull KTM are battling consistently with Payton's team, and after a fantastic 2011 season, the PC crew was decimated by attrition this time around. They lost both coasts in Supercross, Dean Wilson and Darryn Durham were out for summer, Tyla Rattray was called up to the 450 factory team, and Blake Baggett alone withstood the onslaught of the orange and red bikes to win outdoors. Baggett will be back, and so will Durham, but he needed two more 250 riders.

So Payton has gotten creative again. He locked up whiz-kid Adam Cianciarulo with a GEICO-like development deal, and we may or may not see him turn pro early next year. Then PC took a chance on the veteran Martin Davalos, who has always been fast but never a finisher. And now has picked up Justin Hill, a solid kid but not necessarily a prodigy. He's got a fast family, as well as a big brother who can tell him a lot about the pratfalls of being a professional.

Add it up -- Baggett, Durham, Davalos and Hill, with Adam C. in the pipeline -- and that's a solid team. No, it's not McGrath/Lamson/Buehl/Swink like Mitch had in 1991 when this whole thing started, but it shows that he's still in it to win, and now so are the competition.